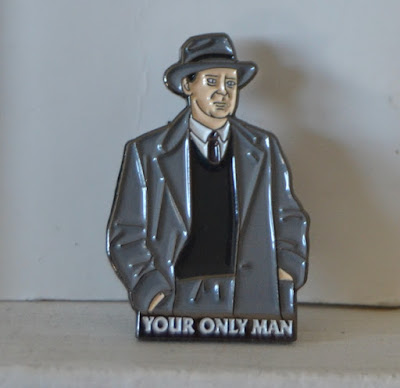 Here's a lovely Flann O'Brien badge from the fantastic Three Castles Burning Dublin history podcast. It was a present from my Dublin friend Alfreda O'Brien (a genuine O'Brien, unlike Brian O'Nolan – follow her on Twitter @DublinAffair).
'When things go wrong and will not come right
Though you do the best you can
When life looks black as the hour of night
A pint of plain is your only man'

That's from Flann O'Brien's first masterpiece, At Swim-Two-Birds, which was the last novel that James Joyce read.  It was published on 3 March 1939, just two months before Finnegans Wake.

The story of how Joyce came to read the book is told in a letter of 1 May 1939 from Brian O'Nolan to Eric Gillett, literary adviser to Longmans, his publishers. I have a photocopy of the letter which Sue Asbee gave me in the early 80s, when we were both postgraduate students at Queen Mary College London. 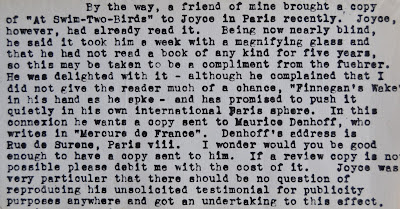 Sue wrote on the back, 'Peter - this is copyright material! Read it with care!' But it's now been published in the new Collected Letters, so I think it's ok to share it now.

O'Nolan adds an apostrophe to Finnegans Wake. This was an easy mistake to make, since the book would not be published until 4 May.  Joyce did have the book 'in his hand as he spoke' since he'd been given an advance copy on 30 January, in time for his birthday party.

The friend who brought the book to Joyce was Niall Sheridan, who was at University College Dublin with O'Nolan. He appears as the character Brinsley in At Swim-Two-Birds, and he played a big role in the book's creation – cutting one fifth of the text according to his own account.

Here's how Anthony Cronin describes Sheridan in No Laughing Matter: The Life and Times of Flann O'Brien: 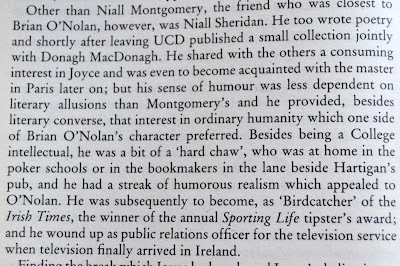 It's fitting that Sheridan became a tipster. His interest in the horses features in At Swim-Two-Birds. A Newmarket racing tipster's letter ('This horse is my treble nap CAST-IRON PLUNGER') which he showed O'Nolan is quoted verbatim in the book.

In his essay, 'Brian, Flann and Myles' in Myles: Portraits of Brian O'Nolan, 1969, Sheridan records how 'Brian gleefully borrowed any material that came to hand.'

In his essay, Sheridan describes being part of a team of writers that O'Nolan assembled to 'manufacture' the Great Irish Novel, to be called Children of Destiny. It would be 'the first masterpiece of the Ready-Made or Reach-Me-Down School’ of novel writing.' Sheridan's job was to write the book's climax, set in an All-Ireland Football Final at Croke Park. Sadly, the book never materialized.

In the Irish Times, the great Frank McNally described a talk by Dr Maeb Long which revealed that, in 1939, Sheridan wrote a story with striking similarities to The Third Policeman. Called 'A Matter of Life and Death', it featured a murder with a bashed in skull and a police sergeant obsessed with the theft of bicycles.

Sheridan gives his own version of his meeting with Joyce in 'Brian, Flann and Myles'. 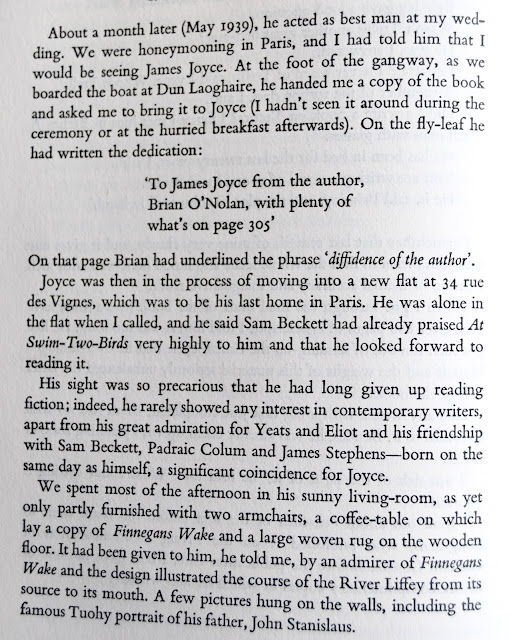 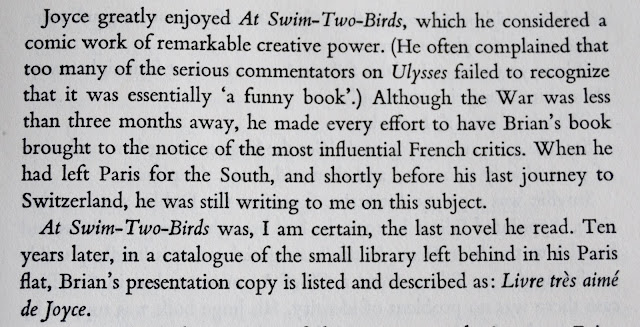 Sheridan's 'looked forward to reading it' is contradicted by O'Nolan's 'had already read it'. O'Nolan's version is confirmed by a letter Sheridan wrote to MacGibbon and McKee when they reissued the book in 1960. Here he says he was 'amazed to find' that Joyce 'had already read it' (quoted by Cronin).
If O'Nolan's letter is correctly dated, the visit must have taken place in April not May. Sheridan has forgotten the date of his own wedding!

Although Joyce had not read a whole book for five years, he was familiar with Samuel Beckett's 1938 Murphy – Beckett may have read it to him in Paris.  Beckett told his biographer James Knowlson that Joyce compared the two books, calling At Swim-Two-Birds 'Jean qui rit' while Murphy was 'Jean qui pleure' (letter of 8 January 1971, in J.Knowlson (ed), Samuel Beckett, an exhibition, Turret Books, 1971, p.29).
'Jean qui pleure et qui rit' is a 1772 poem by Voltaire about changing human emotions. There's also an 1865 children's book by the Countess of Segur about two cousins, an optimist and a pessimist. 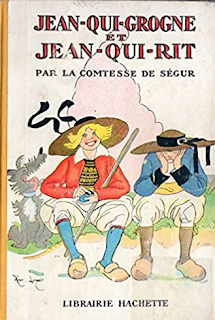 It's nice to think of the enjoyment that Joyce must have got from O'Brien's novel at such a dark time. I bet he laughed out loud when he got to the Ringsend cowboys.
'Up we went on our horses, cantering up Mountjoy Square with our hats tilted back on our heads and the sun in our eyes and our gun butts swinging in our holsters.' 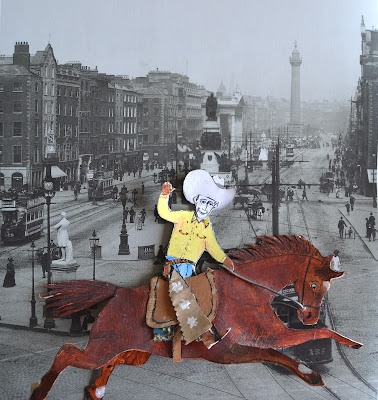 'And away with us like the wind and us roaring and cursing out of us like men that were lit with whiskey, our steel-studded holsters swaying at our hips and the sheep-fur on our leg-chaps lying down like corn before a spring wind' 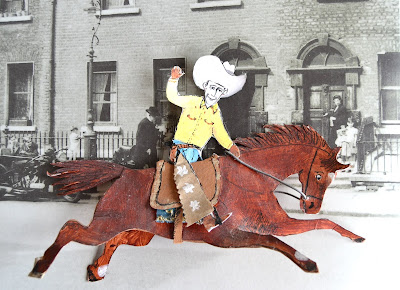 Joyce, who said in 1939 that Finnegans Wake was the dream of Finn MacCool, must also have been astonished to find that his giant was a character in Flann O'Brien's book. Finn appears on its opening page in a very Joycean passage:
'The Third Opening: Finn MacCool was a legendary hero of old Ireland. Though not mentally robust, he was a man of superb physique and development. Each of his thighs was as thick as a horse’s belly, narrowing to a calf as thick as the belly of a foal. Three fifties of fosterlings could engage with handball against the wideness of his backside, which was wide enough to halt the march of warriors through a mountain pass.'
Despite the 'no publicity' promise given to Joyce, the first paperback edition, published in 1962 by Four Square Books, carried a testimonial from the great man. It's also on my Penguin paperback. 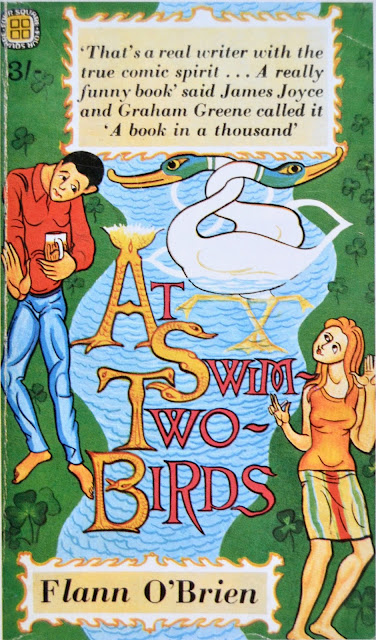 According to Cronin, the source of the quotation is a letter from Sheridan to the publisher Timothy O'Keefe. He must have had a lot more to say about what Joyce thought of the book. It's a shame that Joyce's letters to Sheridan have never been published.
In his dedication, O'Nolan offered Joyce 'plenty of' 'diffidence of the author'. But his description of Joyce in the letter as 'the fuehrer' shows that his attitude to him was always ambivalent.  Here's a final story, from Beckett, quoted in Cronin's biography. 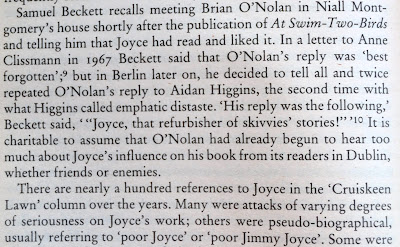 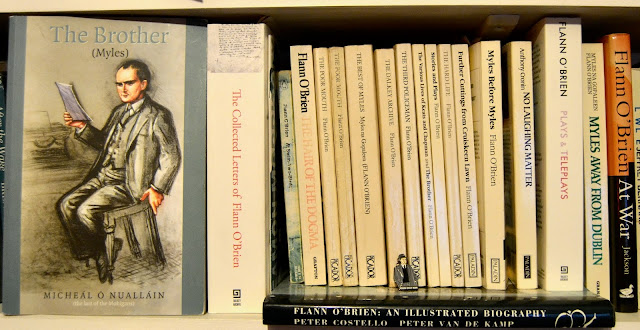