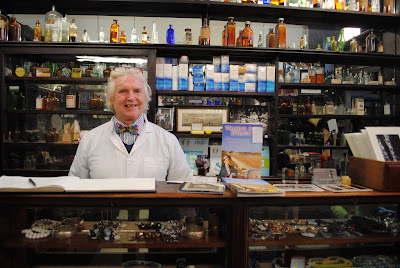 After our trip to Chapelizod, we headed to Sweny's Pharmacy, a delightful Joycean shrine run by enthusiastic volunteers. They have regular readings from Joyce's works, including Finnegans Wake, and also sell Joyce's books, postcards and souvenirs. Don't go looking for medicine though. They proudly boast that this is the 'worst Pharmacy in the city'!

There's a lovely bit of film on vimeo, by Ailbhe O'Donnell, which beautifully captures the atmosphere of Sweny's.

The man in the white coat above is P.J.Murphy, one of the volunteers. You can see him here on youtube talking about his favourite bits of Ulysses.  We had a long chat, and he invited me to come back the following day for their weekly reading of Finnegans Wake. I bought a bar of lemon soap, as I always do when I visit Sweny's. 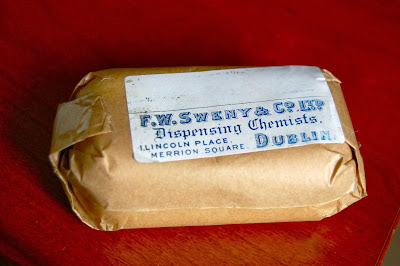 In Ulysses, Leopold Blooom goes to Sweny's to order some orangeflower and whitewax skin lotion for his wife. He also picks up a bar of lemon soap, on impulse, promising Mr Sweny to come back later to pay - a promise he forgets to keep.

Bloom's lemon soap has its own mini-Odyssey through the pages of the book, as he variously moves it from one suit pocket to another. Finally, in the hallucinatory Circe episode, the soap appears as a character in its own right!:

'BLOOM: I was just going back for that lotion, whitewax, orangeflower water. Shop closes early on Thursday. But first thing in the morning. (He pats divers pockets)....

(He points to the south, then to the east. A cake of new clean lemon soap arises, diffusing light and perfume.)

THE SOAP:
We're a capital couple are Bloom and I;
He brightens the earth, I polish the sky.

(The freckled face of Sweny, the druggist, appears in the disc of the soapsun.)
SWENY: Three and a penny, please.
BLOOM: Yes. For my wife, Mrs Marion. Special recipe.' 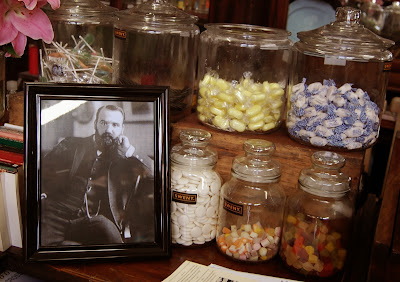 That's a picture of Mr Sweny himself, an astonishing find, on display in the Pharmacy. 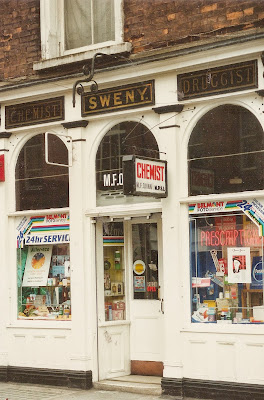 When I first visited Dublin, in the 1980s, Sweny's was an ordinary modern chemist's, with no visible sign of a Joyce connection. I took this photo in 1987, when I bought a film and some toothpaste there. I'm pretty sure there was no lemon soap for sale then.

By the 90s, the Joyce tourism industry was in full swing. So, in 1993, I did buy a bar of lemon soap, but from the Joyce Tower at Sandycove rather than Sweny's. I still have the faded box it came in. 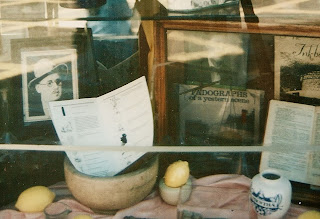 We were back in Dublin in 2004, celebrating the centenary of Bloomsday. The whole city had gone Joyce nuts and every butcher and cheesemonger had a quote from Ulysses in the window. Sweny's was still a pharmacy, but now had a window full of Joycean memorabilia and lemon-shaped lemon soaps.


The Pharmacy finally closed in 2009, and it looked for a while as if the beautiful interior might be lost, ending up as yet another bland coffee shop. But a group of volunteers got together to save it. They are unpaid, but costs are partly covered by the sale of Joyce's books, jewellery and the famous lemon soap.

Here's a photo I took of the window in the spring of 2013. Not only were they reading from Ulysses, Finnegans Wake, A Portrait and Dubliners, but also from Ulysses in French! 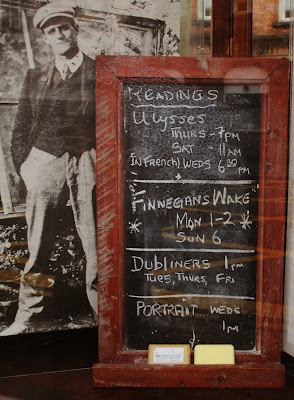 Here's a man we met in Sweny's in 2010. He was introduced to us as the great-grandson of Mr Sweny's second cousin. 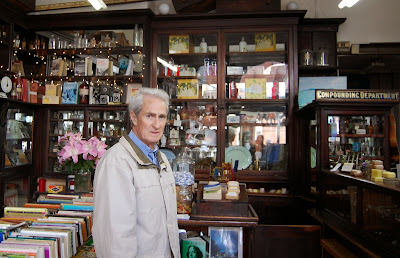 The cabinet drawers are filled with old paper packages 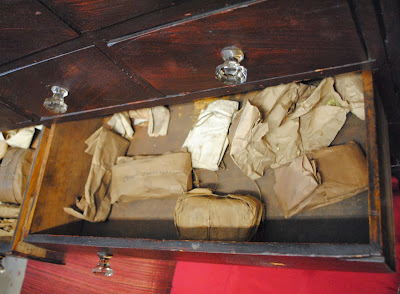 This chap (below) used to stand outside the Pharmacy, but they had to get rid of him for health and safety reasons!

I recommend Sweny's lemon soap, which you can now buy online from them. It's very lemony. 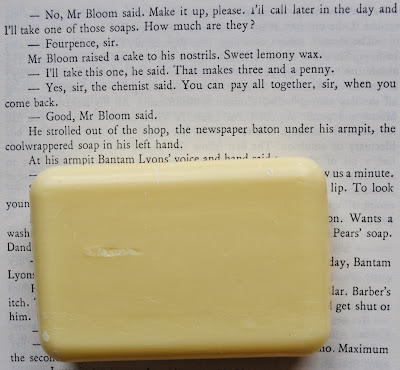 I went back the following day to join in their weekly Finnegans Wake reading...
Posted by Peter Chrisp at 16:22