'The best way to approach Finnegans Wake is in a group. It has to be stalked like a wild animal, and you need a hunting party.'  Robert Anton Wilson

I found a Wake hunting party over a decade ago. It's called FWREAD, and it takes the form of a page-a-week email discussion. Over the years, many members of the hunting party have joined and others left. But one dedicated contributer throughout was Elaine Mingus, of Albuquerque, New Mexico, who died in February. It was Elaine who often kept the group going - when people stopped posting, she would ask questions about the week's page to get the discussion restarted.

Elaine came across as someone with loads of energy and enthusiasm for Joyce. Apart from following two online Joyce groups, she founded and led four reading groups, two in Santa Fé, and two in Albuquerque. She attended Joycean conferences, and read papers at them, and she hosted her own annual Bloomsday celebration. Here's her description of it, from 2011

'We have a Bloomsday celebration here which used to be in Santa Fe. It is held right here at my house, a large property. We set up chairs in the back yard and have a podium and speaker and tent on the patio.

We are planning readings this year from Dubliners, Portrait, Ulysses and FW. We do something from Molly's monologue every year.  We always end around the piano and everyone sings Loves Old Sweet Song.
Hoppy hoppy Bloomsday to all!'

In 2012, Elaine brought out her first book, a collection of her papers on Joyce called Toccatootletoo!. Its publication was marked with a lovely feature on her by Joline Gutierrez Krueger in the Albuquerque Journal. Reading this, I was astonished to learn that this dynamic woman was an 86 year-old great-grandmother, who had only started reading Joyce when she was in her sixties! 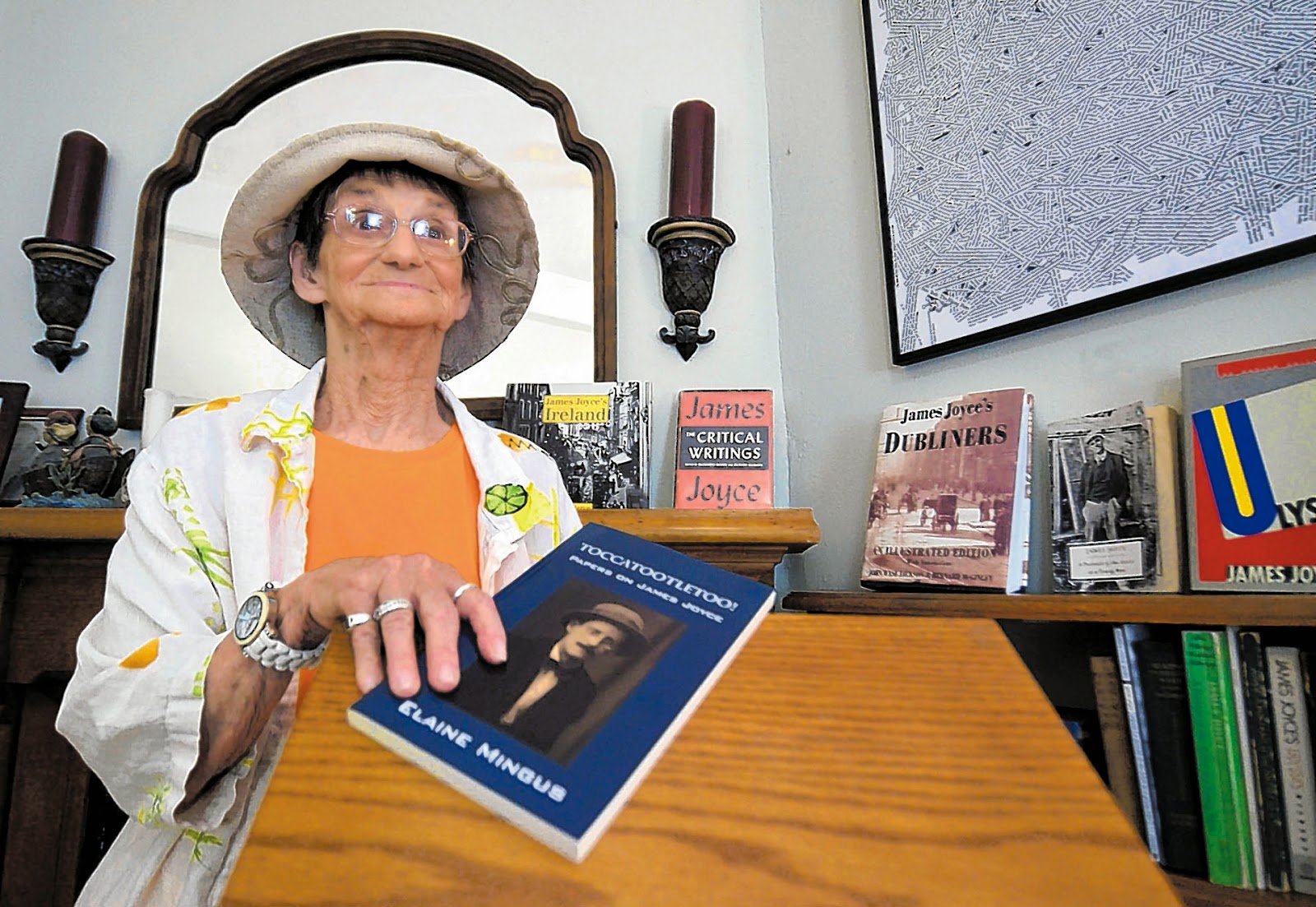 'There have been times, Elaine Mingus admits, when she wondered what in the world made her think she, then a woman well into her 60s, could write scholarly papers on esoteric author James Joyce when she had never so much as taken a college course on him – or any other author or subject.

And then she would reflect on the words of Joseph Campbell – Joycean scholar, renowned mythologist and one of Mingus’ other favorite authors – who famously described the way he had gleaned more from great works of literature, history and philosophy than could be derived under the constraints of doctorate studies: “All I did was underline sentences and take notes.”

That was heartening for a woman whose Depression-era family could not afford to send her to college and never would have anyway, because her father believed girls did not belong in higher education but in the marital home raising children.

But oh, how she loved to read. How she longed to be read, longed to extract meaning and feeling and awe from the words of those great authors before her.

Mingus, now 86, did marry. She raised five children, who in turn bestowed her with eight grandchildren and five great-grandchildren. 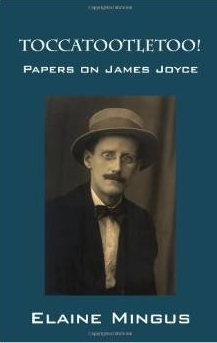 And then she read.

And then she wrote.

This Sunday, her writings will be celebrated at a book signing for her first book, “Toccatootletoo! Papers on James Joyce,” a compilation of seven of her scholarly papers on the esteemed Irish author, some of which have been presented at academic conferences across the country.

Another Campbell quote comes to mind when I think about what Mingus has accomplished: “Follow your bliss.” For Mingus, her bliss has been Joyce.

“I have read so much that I easily get bored, but I find I am never bored reading Joyce,” said Mingus, a tiny, energetic woman who fancies floppy hats and colorful attire. “I always come back to him. He’s like a magnet.”


The article led to an interview by Gerry Fialka of Venice CA, who threw lots of off-the-wall questions at Elaine ('what was the motive of the cave artist?' 'Is perception reality?' 'Have you believed in any impossible things lately?'). While this is an unusual way to conduct an interview, you get a real sense of Elaine's personality from her answers. When Gerry asks her a political question, Elaine replies, 'I've retired from politics. I've retired from everything except Joyce!'


Elaine followed up her book on Joyce with a collection of poems, Leally and Tululy: Free Verse, and a memoir, Klokking Twelve - two more titles from the Wake. In both, she looks back at her childhood in the Midwest during the depression, and pays tribute to her mother who gave her a life-long love of books.


In her memoir, Elaine describes how, while being treated for cancer in 1995, she first began to read the Wake:

'I asked the family to bring me James Joyce's Finnegans Wake for something to take my mind off things. This 628 page book was propped up on my tray. All the time they were not attending to me or feeding me, I was reading it. It worked! Back home I kept on reading it. Once I had thought this book was 'unreadable.' Then I became enchanted with the gems, the poetic passages, the 'naughty bits' (between the lines). I joined a Finnegans Wake discussion group on the internet. This was only the beginning of my exploration of this book.'

What comes across strikingly from Elaine's story is the magnificent life-changing role that public libraries play. As she told Gerry Fialka, it was thanks to a local librarian that she discovered the internet groups:

'I was at the library and one of the librarians asked me if I knew about the internet discussion groups. I told her I didn't, and she told me the websites for two internet discussion groups, the Joyce group and the FWREAD group. I came right home and got on both of them....Then in 98, I heard from the internet group that they celebrated Bloomsday all over the world, and I thought, why don't we celebrate it here? So I started putting flyers out....'

Elaine had started writing a fourth book when she became ill last December. In January, we received this message from her daughter, Jackie:


'I am sending this email on behalf of my Mother, Elaine Mingus. Around the 10th of December, we found out that at the age of 87, that she has advanced pancreatic cancer. She is now on morphine and a pain patch but she is deligently working on her 4th book!
After she self published her Joyce book (Toccatootletoo), she then self published a book of her poetry called Leally and Tululy and finally a book of memoirs called Klokking Twelve. On February 1, she will have a book signing at her residence for her book, Klokking Twelve. The family thinks that this book signing may not occur but it is giving her something to look forward to.
She wanted me to let the group know that she has really enjoyed corresponding with all of you.'

This was followed on 1 March by a second message from Jackie:

'I wanted everyone to know that Elaine Mingus passed away on February 12, 2014. Sadly, she missed her 88th birthday by exactly two weeks. Her friends and family will dearly miss her.

As her daughter, I know that she immensely enjoyed her experience with all of you. I read all of your original responses to the news of her illness and it really meant a lot to her. '


Dee Cohen, a friend of Elaine's has set up a tribute page, with photographs, including one of the house where she held all those Bloomsday celebrations. Here's Elaine's card. 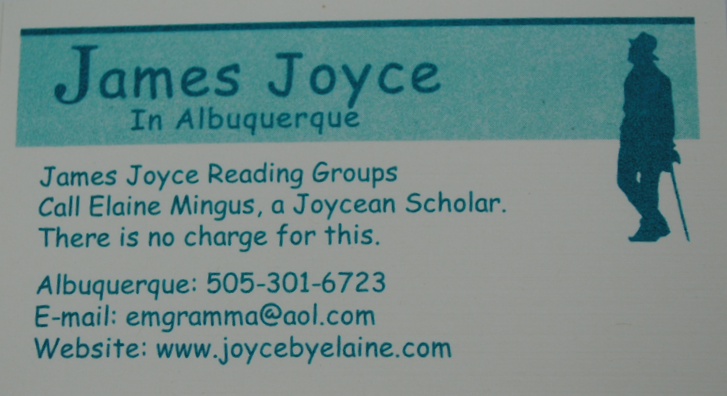 Here's Elaine again, wearing another of her famous floppy hats. 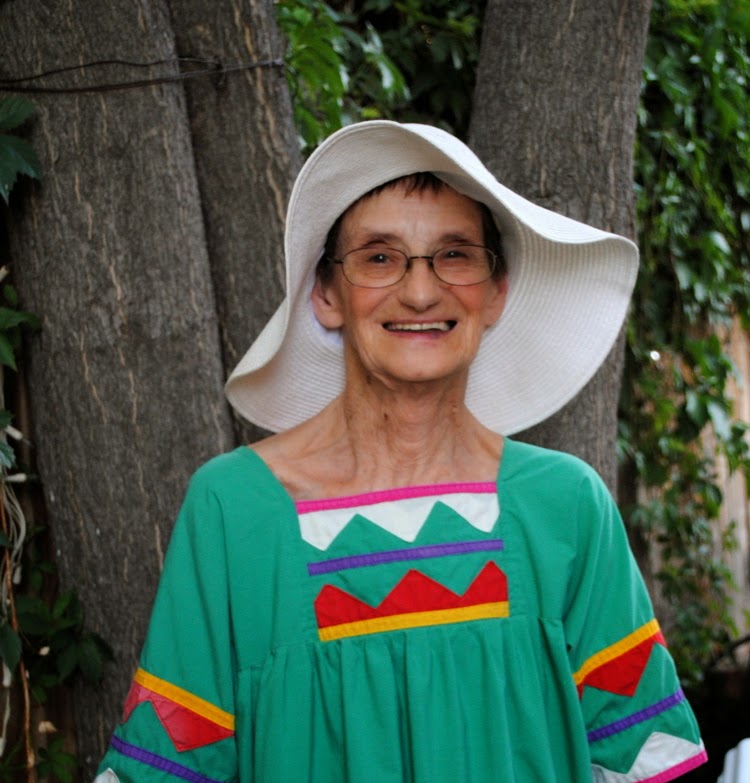 Another friend, Jitman Basnet has made a video tribute to Elaine, which is on youtube.

When I joined FWREAD, the hunting party was already halfway through the book but, since Finnegans Wake is circular, you can jump in at any point. After we got to the end, in 2008, we started all over again. Right now, we're in the pub chapter, on p.334, about to start the story of 'How Buckley shot the Russian General'.


If you want to join in, you can subscribe to FWREAD by sending this message: subscribe fwread Your Name

To leave the group, send this message: unsubscribe fwread Your Name

One tip is to set up a new email address to susbcribe with, so your usual in-box isn't swamped with the Wake.
Posted by Peter Chrisp at 16:57 No comments: