The James Joyce Sundial at the Merrion Hotel

Back in Dublin last weekend, Lisa and I went to see the latest statue of James Joyce. It's called 'Ripples of Ulysses', and it's by the Dublin sculptor, Rowan Gillespie, who has his own bronze casting foundry at Blackrock. 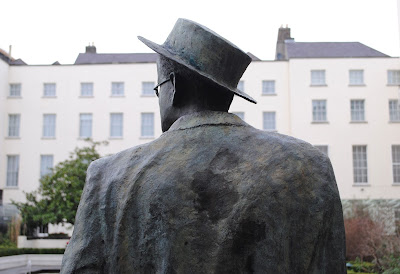 Although it dates from 2000, nobody we spoke to in Dublin knew it existed, probably because it's in the back garden of the five-star Merrion Hotel. In the photo above, you can see the four Georgian townhouses, which have been combined to make the hotel. The one on the right is said to be the birthplace of the Duke of Wellington (though his nurse claimed he was born at Dangan Castle).

It's here because the hotel is part-owned by Lochlann Quinn, art collector and philanthropist, who has generously put a lot of his collection on show.

Arriving at the hotel, I asked the uniformed doorman about the statue, and he was happy to let us see it, proudly leading us through the garden, past a bust of Homer. 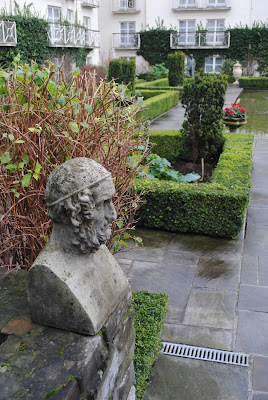 The wonderful thing about this statue is that it functions as a sundial, with Joyce himself as the gnomon ('one that knows or examines' in Greek), or pointer.  As the sun moves around, Joyce's shadow falls on a series of quotations from Ulysses, showing us what Bloom is up to throughout the day. 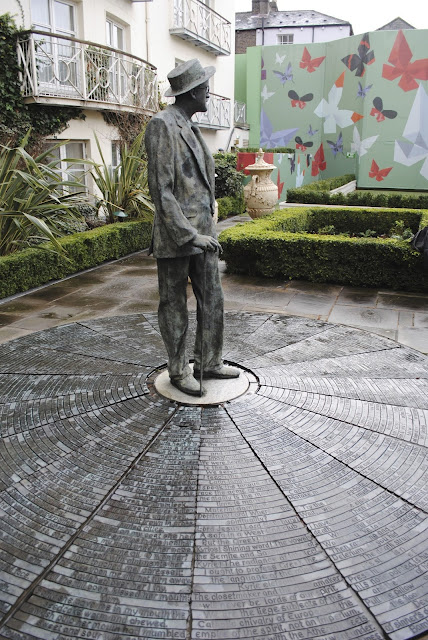 We arrived at 1pm, when Bloom's enjoying his glass of Burgundy and gorgonzola sandwich at Davy Byrnes pub, just down the road in Duke Street. As the text below 1pm says, 'Glowing wine on his palate lingered swallowed. Crushing the grapes of Burgundy.' 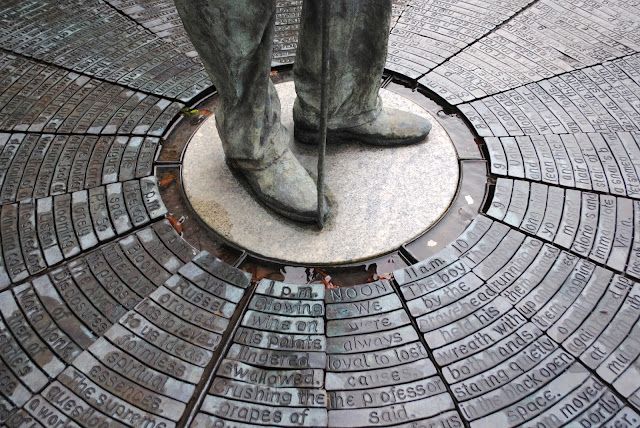 Below is the night section of the dial. I wondered why the hours here were irregularly spaced until I realised that, of course, at night, it can't function as a sundial. 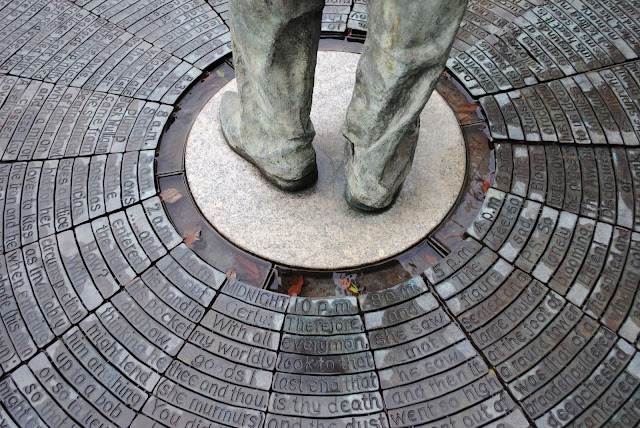 The only problem with the sundial function is the tall building directly behind, which stops the sunlight reaching it on winter mornings. It's a shame they didn't put it in the middle of the garden. 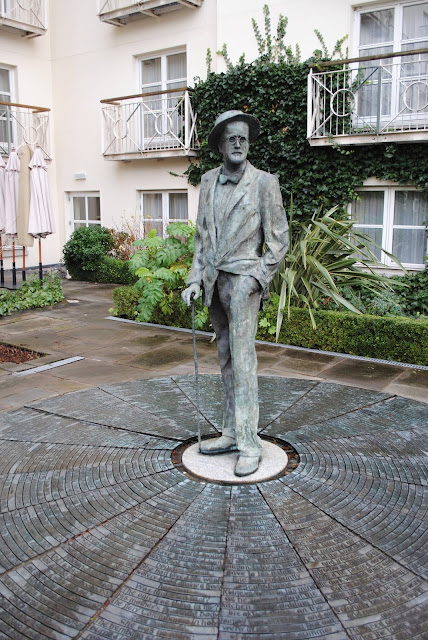 The statue is beautifully made, with Joyce wearing accurately rendered spectacles (rare in bronze) and a hat with a very thin brim. Is it too delicate to be in a public street? 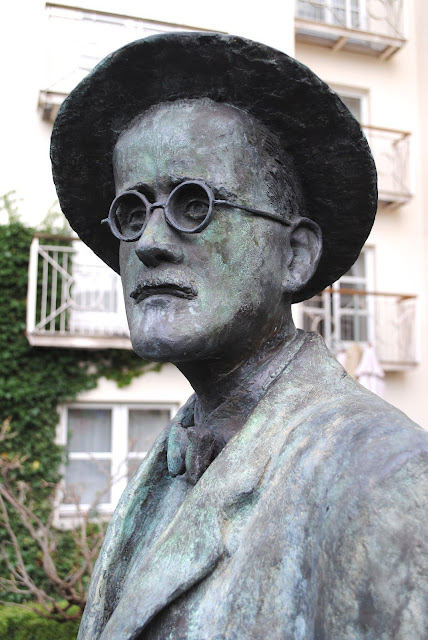 Here's the hand that wrote Ulysses (and Finnegans Wake). 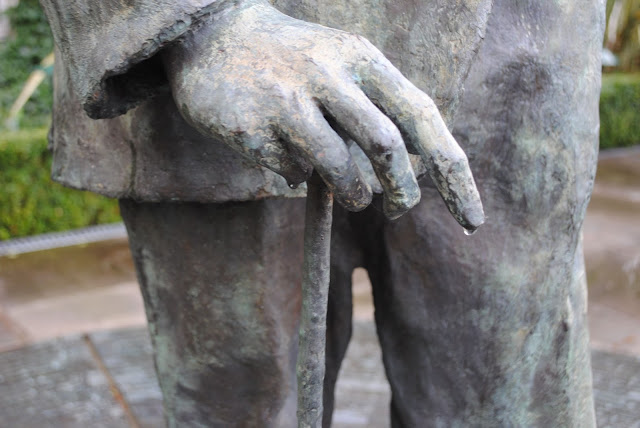 'When a young man came up to him in Zurich and said, ‘May I kiss the hand that wrote Ulysses?’ Joyce replied...‘No, it did lots of other things too.’'

The statue was orginally commissioned by Regis University, a Jesuit institution in Denver Colorado.  I found a funny story about this commission by Claire Wrathall in the Telegraph:

'It’s an irony...that what the artist calls “this Reader’s Digest sundial version of Ulysses” was rejected by the Jesuit university in the US that originally commissioned it. On seeing it, they were, he recalls, “absolutely shocked” by Joyce’s words (specifically the passages related to 9.30pm, 1pm, 3pm and 3am, if you care to look them up) and asked him “to change several of the panels, something I very quickly refused to do.” Quinn stepped in and bought the work instead, and so it remains in the city it speaks of and that inspired it.'

That's a great story isn't it? However, Regis University does have its own copy of 'Ripples of Ulysses', which you can see on youtube (it has an added water feature) and which Gillespie calls 'Ripples 2' on his CV.  Did the Jesuits change their minds when they saw how lovely the Dublin one was? 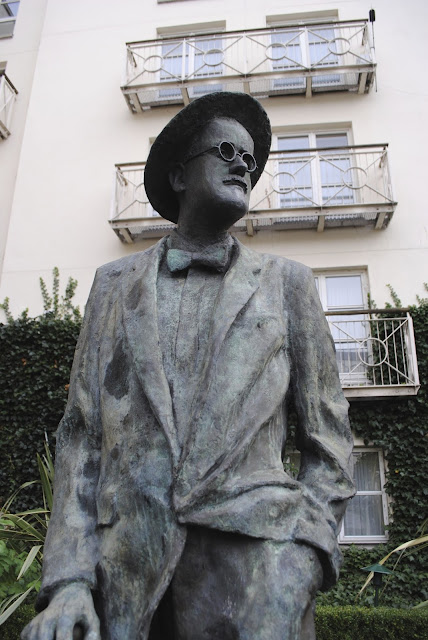 Because it's not well known, this is one of the few Dublin statues which doesn't have a nickname. Dubliners have named others 'the Prick with the Stick', 'the Tart with the Cart', 'the Floozie in the Jacuzzi', 'the Fag on the Crag', 'the Hags with the Bags', 'the Ace with the Base', 'the Crank on the Bank', and 'the Erection at the Intersection'.

I couldn't think of a nickname, though it could end with 'on the sundial' or 'in the hotel' (which I can't come up with a good rhyme for). If you can think of one, please post a suggestion below! 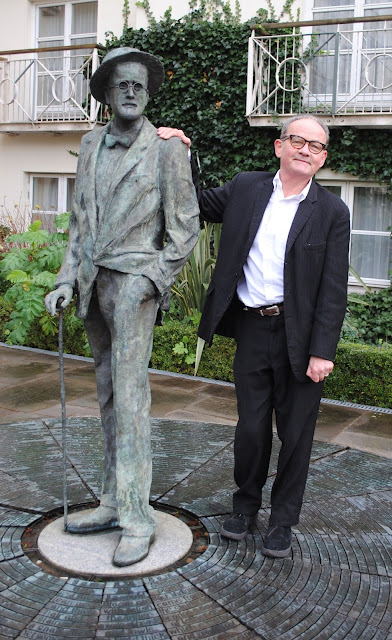