A Pint in the James Joyce Pub, Istanbul 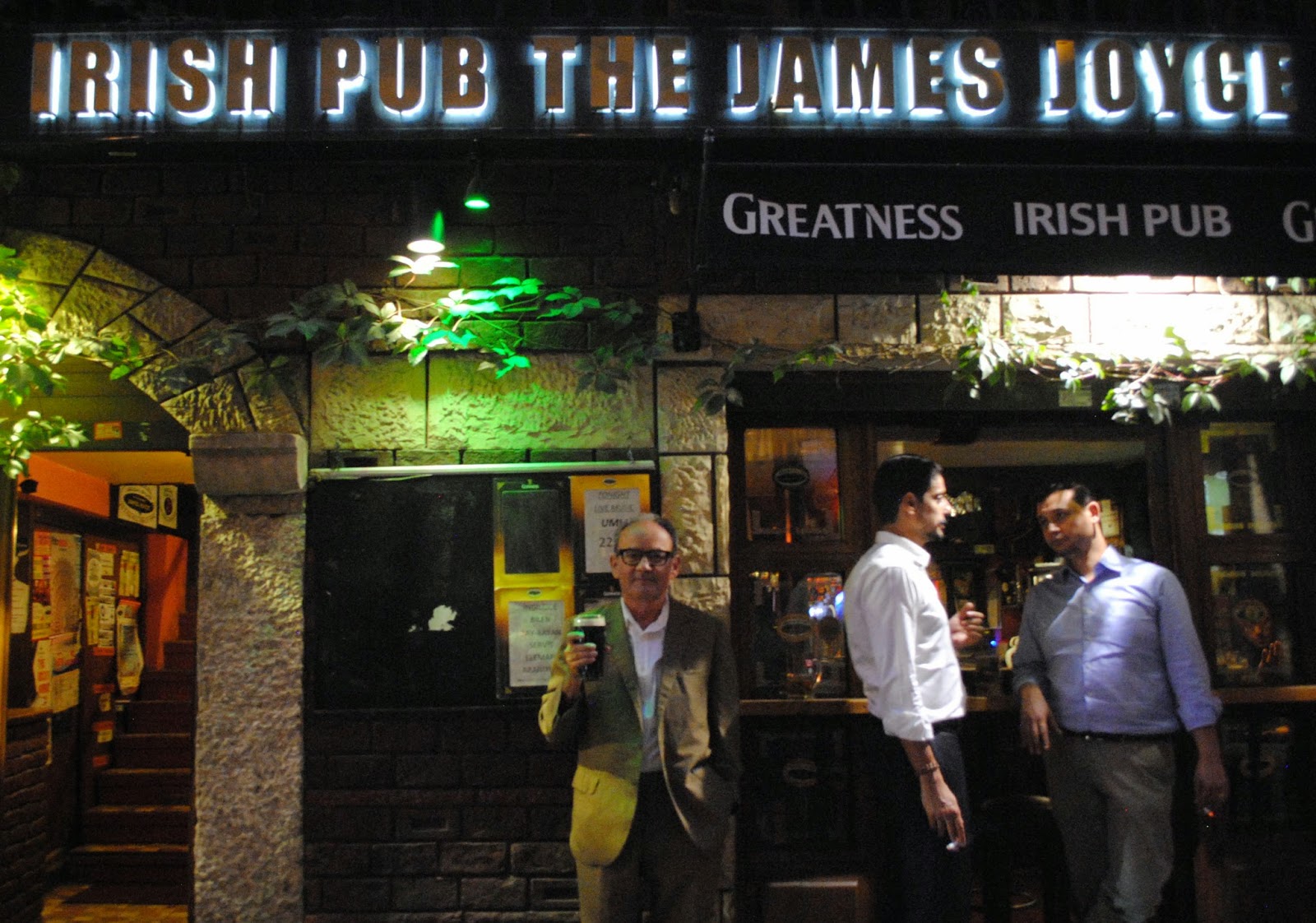 I've just got back from a ten day holiday in Istanbul, where I visited some amazing places, including Hagia Sophia, the Basilica Cistern, the Church of St Saviour in Chora, and the JAMES JOYCE IRISH PUB!


It gets terrible reviews on trip adviser, but I think the only reason people go on trip adviser is to write bad reviews. Somebody even complained that the pub was 'dingy inside', as if that was a bad thing for a pub!


When we went, the service was friendly, the toilets were clean and the Guinness was delicious.  They've also thought about the Joyce theme, and there's a biography of the great man on the drinks menu and website. The bar staff have Joyce on their t-shirts.

My only criticism of the Guinness is the large size of the head, but it was a creamy pint, and better than many you get in Ireland or Britain, where Guinness is now served much colder than it should be. 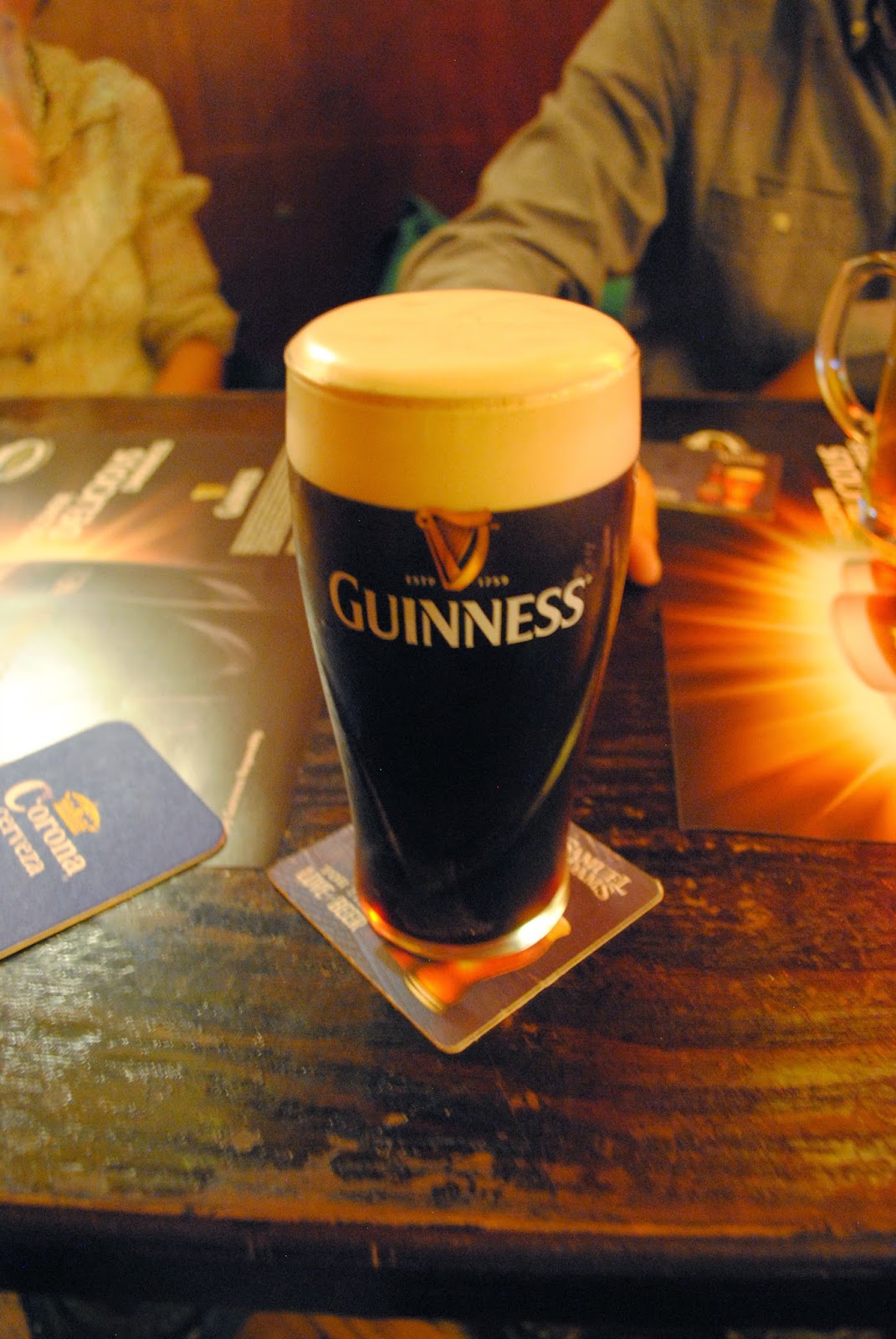 It struck me that they could have included some Joycean quotations related to Turkey on the walls. For example, in 1937, following a Thanksgiving dinner in Paris, Joyce wrote a poem in which he imagined the Turkish turkey describing the feast (In fact, the turkey bird has nothing to do with Turkey - it's a misunderstanding). Here are two verses (quoted by Ellmann):

At last I reached the banquet hall – and what a sight to see!
I felt myself transported back among the Osmanli
I poured myself a bubbly flask and raised the golden horn
With three cheers for good old Turkey and the roost where I was born.

I shook claws with all the hammers and bowed to blonde and brune
The mistress made a signal and the mujik called the tune.
Madamina read a message from the Big Noise of her State
After which we crowed in unison: That Turco's talking straight!


Although Joyce never went to Turkey, he came across Turks in Trieste, and according to Ellmann, he 'was curious about the eastern influence that showed in the Greek, Turkish and Albanian costumes in the streets'. 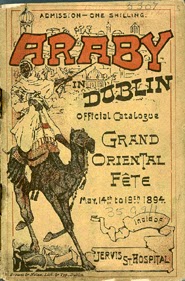 In his books, Joyce often uses the Orient as a location for escapist fantasy. Dubliners has a story 'Araby', set against the 1894 bazaar held in Dublin:

'The syllables of the word Araby were called to me through the silence in which my soul luxuriated and cast an Eastern enchantment over me.'

Then there's the appalling Mrs Kearney, in 'A Mother', 'trying to console her romantic desires by eating a great deal of Turkish Delight in secret.' 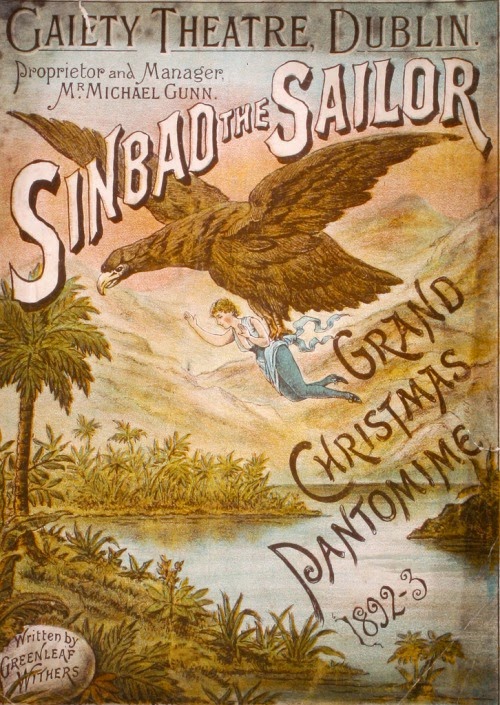 Dublin's Gaiety Theatre pantomines, such as Sinbad the Sailor, The Forty Thieves, Aladdin and Turko the Terrible, often had an Oriental setting. Here's Stephen Dedalus in Ulysses thinking of his mother's favourite pantomime:

'She heard old Royce sing in the pantomime of Turko the Terrible and laughed with others when he sang:

I am the boy
That can enjoy
Invisibility.'

Turko the Terrible was a hugely popular pantomime, starring the great comic character actor, Edward William Royce.  Here he is (below) in another Orientalist Gaiety pantomime, The Forty Thieves, in a picture from the V&A. I found another picture of him here.


'It was at Christmas 1873 that the first pantomime was tried at the Gaiety and the famous Turko the Terrible—a pantomime never excelled in Dublin—was the work selected. Mr. Edwin Hamilton was accountable for the words of the songs and the one sung by King Turko in the throne room while anticipating the delights to be derived from his magic rose, where he thinks, ‘Invisibility is just the thing for me,/I am the boy that can enjoy/Invisibility’ was the most successful in the whole book. Mr. E. W. Royce enacted the title role as only his lively self at that time could.'  The Irish Playgoer, 1899

Both Bloom and Stephen have oriental fantasies. Here's Bloom, who has also seen Turko the Terrible, daydreaming as he sets out to buy his breakfast kidney:

'Somewhere in the east: early morning....Wander through awned streets. Turbaned faces going by. Dark caves of carpet shops, big man, Turko the terrible, seated crosslegged smoking a coiled pipe. Cries of sellers in the streets. Drink water scented with fennel, sherbet. Wander along all day. Might meet a robber or two. Well, meet him. Getting on to sundown. The shadows of the mosques along the pillars: priest with a scroll rolled up. A shiver of the trees, signal, the evening wind. I pass on. Fading gold sky. A mother watches from her doorway. She calls her children home in their dark language. High wall: beyond strings twanged. Night sky moon, violet, colour of Molly's new garters. Strings. Listen. A girl playing one of these instruments what do you call them: dulcimers. I pass.'

The night before the book opens, Stephen has had a dream of a 'Street of Harlots. Remember. Haroun al Raschid...Red carpet spread'.   Bloom has also had an oriental dream, of Molly with 'red slippers on. Turkish. Wore the breeches.'

She appears in a Turkish costume in one of the hallucinations in 'Circe':

'Beside her mirage of datepalms a handsome woman in Turkish costume stands before him. Opulent curves fill out her scarlet trousers and jacket slashed with gold. A wide yellow cummerbund girdles her. A white yashmak, violet in the night, covers her face, leaving free only her large dark eyes and raven hair...A coin gleams on her forehead. On her feet are jewelled toerings. Her ankles are linked by a slender fetterchain....Beside her a camel, hooded with a turreting turban, waits. A silk ladder of innumerable rungs climbs to his bobbing howdah.'

In her final monologue, Molly thinks of getting 'a nice pair of red slippers like those Turks with the fez used to sell.'

Finnegans Wake is packed with Turkish words and references, many of them documented by Kevin M. McCarthy in the James Joyce Quarterly Vol. 9, No. 2,, which you can read online if you register with JSTOR. You can also find the Turkish words listed in fweet.  I only have space to look at a couple of examples here - there are many more in McCarthy's article.

'He had fled again (open shun-shema!) this country of exile, sloughed off, sidleshomed via the subterranean shored with bedboards, stowed away and ankered in a dutch bottom tank, the Arsa, hod S.S. Finlandia, and was even now occupying, under an islamitic newhame in his seventh generation, a physical body Cornelius Magrath’s (badoldkarakter, commonorrong canbung) in Asia Major, where as Turk of the theater (first house all flatty: the king, eleven sharps) he had bepiastered the buikdanseuses from the opulence of his omnibox while as arab at the streetdoor he bepestered the bumbashaws for the alms of a para’s pence.'  98.4-14

These are some of the rumours surrounding the disappearance of HCE in Bk1 Chapter 4. He is said to have stowed away and escaped abroad to Asia Minor, where, as 'Turk of the theater' he threw coins (Turkish piastres) at the belly dancers (Dutch 'buikdanseuse') from the opulence of his box while, as a street Arab, he pestered 'bumbashaws' for alms. 'Turk of the theater' and 'open sun-shema!' ('Open Sesame', from Aladdin, mixed with Shaun and Shem) recalls the Gaiety pantomimes. 'Karakter' is Turkish for character and  'Para', in 'para's pence', is Turkish for money.

Here's Shaun describing the foul stench of his brother Shem the Penman:

'no-one, hound or scrublady, not even the Turk, ungreekable in pursuit of armenable, dared whiff the polecat at close range' 181.22-4

That combines Wilde's joke that 'Fox hunters are the unspeakable in pursuit of the uneatable', with the Turkish-Greek conflict and the Armenian atrocities - the Turkish massacre of Armenian Christians in the early 1900s. This is also referred to in 'Armenian Atrocity' (72.11) and 'tuckish armenities' (530.36)

'He walked cheerfully towards the mosque of the baths. Remind you of a mosque, redbaked bricks.'

In Ulysses, Bloom has a bath at the Turkish and Warm Baths, 11 Leinster Street. This was one of several Turkish baths in Dublin, including the Hammam in Sackville Street and the Lincoln Place Turkish Bath Company, whose building resembled the Royal Pavilion in my home town, Brighton. The phrase 'mosque of the baths' and later description of its 'oriental edifice' suggests that Joyce may have confused the Leinster Street baths with this one, which closed down in 1902.

Malcolm Shifrin, who's writing a book about Victorian Turkish baths, has a good piece on Bloom's bath on his website. Joyce talked about Bloom's bath with Frank Budgen, saying, 'Does your reader realize what a unique event this was in the Dublin I knew up to 1904.' (James Joyce and the Making of Ulysses xvii)

The first Dublin Turkish bathhouse was opened in the late 18th century by an extraordinary character called Dr Achmed Borumborad. His story is told by Jonah Barrington, in his entertaining memoir, Personal Sketches of His Own Times, 1827, which you can read online here. Here's how Barrington describes Borumborad:

'He spoke English very intelligibly;  his person was extremely remarkable; and the more so, as he was the first Turk who had ever walked the streets of Dublin in his native costume. He was in height considerably above six  feet, rather pompous in his gait, and apparently powerful; an immense black beard covering his chin and upper lip. There  was, at the same time, something cheerful and cordial in the  man's address; and, altogether, he cut a very imposing figure. Everybody liked Doctor Achmet Borumborad: his Turkish dress,  being extremely handsome without any approach to the tawdry,  and crowned with an immense turban, drew the eyes of every passer by ; and I must say that I have never myself seen a more  stately-looking Turk since that period.   The eccentricity of the Doctor's appearance was, indeed, as  will readily be imagined, the occasion of much idle observation  and conjecture. At first, whenever he went abroad, a crowd of people, chiefly boys, was sure to attend him — but at a respectful distance; and if he turned to look behind him, the gaping boobies  fled, as if they conceived even his looks to be mortal.'

Borumborad persuaded the corporation to fund the building of his bathhouse. He then fell in love with a Miss Hartigan, the daughter of a surgeon. 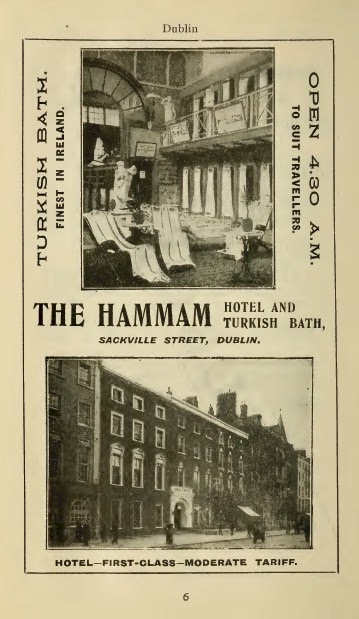 'Miss H. liked the Doctor vastly! and  praised the Turks in general, both for their dashing spirit and  their beautiful whiskers. It was not, however, consistent either  with her own or her brother's Christianity, to submit to the Doctor's tremendous beard, or think of matrimony, till  he had shaved the chin at least, and got a parson to turn him into a Christian, or something of that kind.'

He agreed to her terms, and appeared before her cleanshaven and in European dress.

'In walked a Christian gallant, in a suit of full-dress black, and a very tall fine-looking Christian he was. Miss H. was surprised;  she did not recognise her lover, particularly as she thought it impossible he could have been made a Christian before the ensuing Sunday. He immediately, however, fell on his knees, seized  and kissed her lily hand, and, on her beginning to expostulate,  cried out at once, — " Don't be angry, my dear creature. To tell  the honest truth, I am as good a Christian as the archbishop !  I'm your own countryman, sure enough — Mr. Patrick Joyce  from Kilkenny county. The devil a Turk any more than yourself, my sweet angel! "
The ladies were astonished; but astonishment did not prevent Miss Hartigan from keeping her word, and Mr. and Mrs. Joyce became a very loving and happy couple.  The doctor's great skill, however, was supposed to lie in his  beard and faith, consequently, on this denouement, the baths declined.'


Isn't that a great story? I've told it here because Patrick Joyce/Dr Borumborad is in Finnegans Wake!