'The complete eclipse of my seeing faculties ... I am warding off by dressing in the three colours of successive stages of cecity as the Germans divide them; namely, green Starr; that is, green blindness, or glaucoma; grey Starr; that is, cataract, and black Starr, that is dissolution of the retina....So I had a jacket made in Munich of a green stuff I bought in Salzburg and the moment I got back to Paris I bought a pair of black and grey shoes and a grey shirt; and I had a pair of grey trousers and I found a black tie and I advertised for a pair of green braces and Lucia gave me a grey silk handkerchief and the girl found a black sombrero and that completed the picture.'

In October 1928, when Joyce's eyes had been so bad that he could not read or write for four months, he dictated a very short piece which he called 'Twilight of Blindness Madness Descends Upon Swift'. Here's how he described it in a letter of 23 October to Harriet Shaw Weaver:

'I will send you in a day or two the only thing I have written in the last four months, a short description of madness and blindness descending on Swift in what Gilbert calls the damned trinity of colours, with a commentary. It is just fortyseventimes as long as the text.'

The 'damned trinity of colours' means green, black and grey - the colours which Joyce was wearing at the time in his superstitious attempt to ward off blindness.

Joyce talks here about blindness as well as madness descending on Swift. He didn't go blind, though his eyes gave him terrible pain during his mysterious final illness: 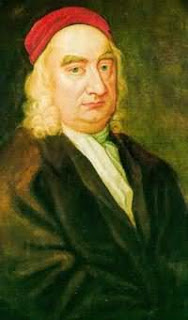 'In October 1742...,his left eye swelled as large as an egg, and the lid appeared to be so much inflamed and discoloured that the surgeons expected it to mortify. The extreme pain he was in kept him waking near a month and during one week it was with difficulty that five persons kept him from tearing out his eyes.'

Here's the piece that Joyce dictated:

The Gilbert referred to above is Stuart Gilbert, who later edited the first volume of Joyce's Letters, where he included the piece, along with this footnote:

'I well remember Joyce reciting to me this passage, which he had just composed, on an appropriately gloomy October afternoon. He was particularly pleased with, and moved by, it and asked me to type a copy. At my request he gave an exact explanation of each of the words employed and I took this down in the form of a glossary. Before I started on this he asked me the Burmese word for twilight, obviously intending to 'work it in' (I had spent many years in Burma and Joyce was interested in that unique and difficult language); hence its intrusion on this page'

I love that description of twilight as 'literally, (the time when ) younger brother (meets) elder brother, does not recognise him but yet recognises him.' What a shame Joyce didn't work it in!

Here's the piece again, set out as poetry

This is written in the same style as Finnegans Wake, but Joyce didn't include it in the book, even though Jonathan Swift is everywhere in the Wake. Fweet gives 310 eucidations of Swift, and he gets a whole chapter in J.S.Atherton's Books at the Wake. Atherton argues that Joyce rejected the piece because it was too gloomy, but I can think of plenty of other personal gloomy passages ('A hundred cares, a tithes of troubles, and is there one who understands me?') . There are also several passages evoking twilight and glaucoma ('my sights are swimming thicker on me by the shadows of this place' 215.09; 'this semidemented zany amid the inspissated grime in his glaucous den' 179.26).

The damned trinity of colours also found a way into the Wake, when Shem/Satan's flag is described as 'black, green and grey' at 441.04.

The original typescript, which Joyce gave Sylvia Beach, is now in the University of Buffalo.

Luckily for Finnegans Wake, Joyce found the brilliant Swiss opthalmologist, Dr Alfred Vogt, who performed a successful operation on his left eye in Zurich in 1930, restoring some of his sight.

Vogt, a true hero to Joyceans, refused to accept any payment.


If you want to find out more about Joyce's eye problems, and the horrific treatments he endured, I recommend this excellent blog posting by PQ at Finnegans, Wake!