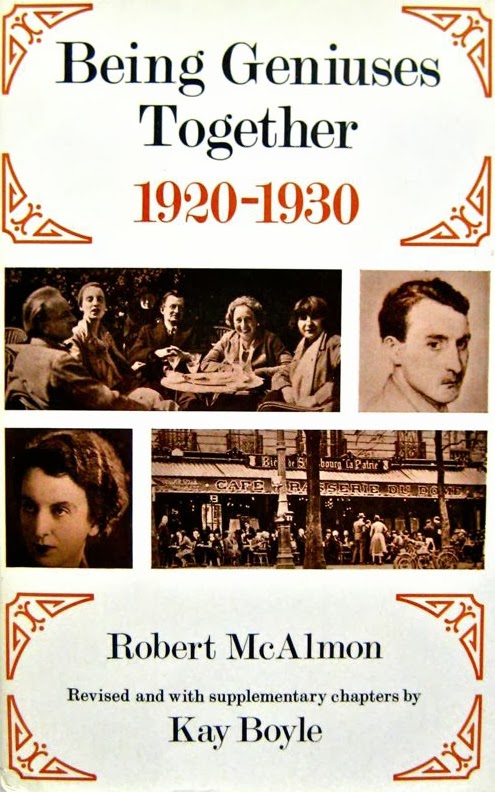 The most vivid and entertaining character in Memoirs of Montparnasse is Robert McAlmon. After finishing Glassco's book, I got hold of McAlmon's own memoir, which has the characteristically witty and self-confident title, Being Geniuses Together.  It was originally published by Secker and Warburg in 1938.

Robert McAlmon is almost forgotten now, but he was a key figure in 1920s Paris. He wrote short stories and poems and founded Contact Editions, publishing Hemingway's first book, among many others. He was James Joyce's financial supporter, occasional typist and regular drinking companion.

He attracted people, and I knew few who did as much....Somehow he dominated whatever group he was in. Whatever café or bar McAlmon patronized at the moment was the one where you saw everybody....His talents made him one of the most interesting personalities of the twenties. His ample means, unique in the Bohemian world, contributed not a little to his popularity. The drinks were always on him, and alas! often in him.
Sylvia Beach,  Shakespeare and Company 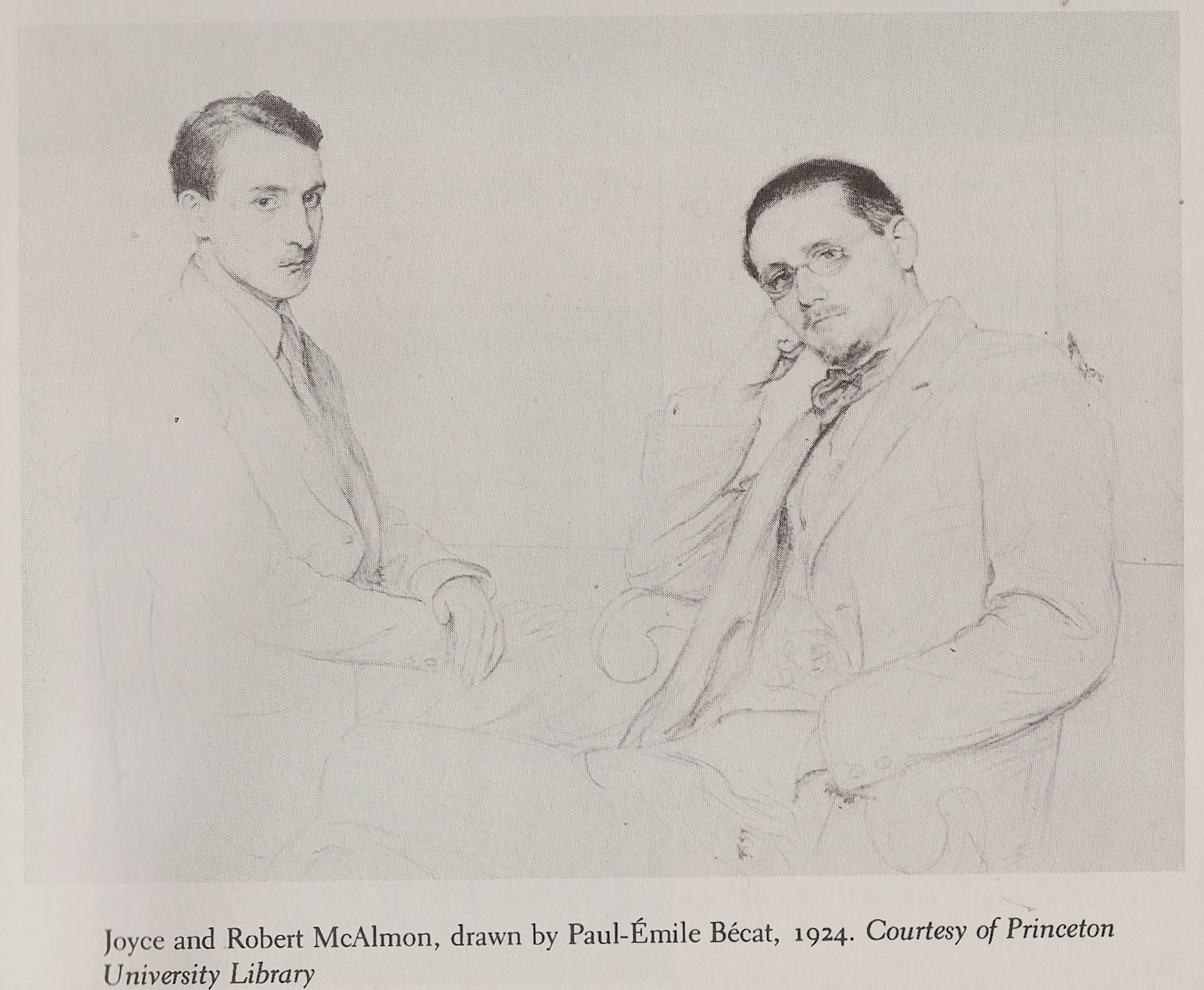 McAlmon's 'ample means' came from an extraordinary piece of good luck. In 1920, while working as a nude model for Cooper Union art classes in New York, he met the poet Bryher (Winifred Ellerman), daughter of Sir John Ellerman, the richest man in England. According to the terms of a will, Bryher needed a husband in order to get her inheritance. McAlmon agreed to an arranged marriage, which allowed Bryher to escape from her strict parents and live abroad with her true love, the poet Hilda Doolittle. In return for a generous allowance, all McAlmon had to do was visit the Ellermans a few times a year with Bryher, keeping up the pretence that they were living together in Paris. After their divorce, in 1927, he received a big settlement from Sir John, which led Hemingway to nickname him 'Robert McAlimony'. (Hemingway hated McAlmon, describing him in a letter to F.Scott Fitzgerald as 'a son of a bitch with a mind like an ingrowing toenail'. McAlmon thought Hemingway was a big phony). 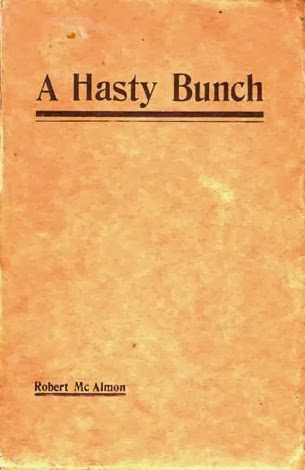 McAlmon's first publication was his own book of short stories, based on his childhood in Dakota. The title was suggested by Joyce, according to McAlmon 'because he found my American use of language racy.' It's more likely that it was because the stories looked like they were written in haste! Joyce told the writer, Morley Callaghan, 'He has a talent, a real talent; but it is a disorganized talent.'

You can see how disorganized he was in his own account of typing the Penelope episode of Ulysses for Joyce:

He gave me the handwritten script, and his handwriting is minute and hen-scrawly; very difficult to decipher. With the script, he gave me four notebooks, and throughout the script were marks in red, yellow, blue, purple, and green, referring to phrases which must be inserted from one of the notebooks. For about three pages I was painstaking, and actually retyped one page to get the insertions in the right place. After that I thought, 'Molly might just as well think this or that a page or two later, or not at all.' and made the insertions wherever I happened to be typing. Years later, I asked Joyce if he'd noticed the mystic arrangement of Molly's thought, and he said he had, but agreed with my viewpoint. Molly's thoughts were irregular in several ways at least.

The book is dull. It takes a person highly curious about life and letters, one of those supermorons, an intellectual, to read it through.

Here he is on Work in Progress (Finnegans Wake):

Work in Progress went beyond the beyond. It was nice to hear him read it in that soothing Irish tenor, but to read pages of that punning, sentimental-remembering, meandering-wondering about life-death-birth, naughty jokings and flippant obscenities, was quite beyond my capacity.

Even so, McAlmon agreed to write an article about the book for transition:

Having been urged to write the article by Sylvia Beach and Joyce, I read it to Joyce to see if he would mind it. The wily Mr Joyce saw that all the 'he hopes he has done this' or 'he endeavours to' phrases were legpulling.

There's the same irreverent attitude in this description of the 1931 reading of the French translation of the Anna Livia Plurabelle passage in Adrienne Monnier's bookshop:


It is indeed a ghastly thing to observe the ghouls, the frustrated old maids of various sexes, the dandruffy young men, and the badly dressed young women who clutter up literary gatherings....The whole crew sat about with expressions painted on their faces that made one feel one was in Madame Tussaud's waxwork museum....We were packed in. It was impossible to escape. Seeing the worshipful, masklike  faces, I lifted my hands for a second in a gesture of prayer....An old man rushed across the room and slapped me in the face. I was naturally disconcerted, but decided that if the old man felt that holy about the session it was his right....
It was not until the next day that I learned who the old man  was....It was Monsieur Dujardin, an aged French author who is supposed to have originated the inetrior monologue....But it was not because of my lack of reverence for the reading that he slapped me. It appears that his wife has very thick ankles, and the old man is touchy about that matter. He thought I had looked down at her feet and put my hands up in mock horror.

The book is especially valuable for the revealingly human portrait of Joyce, who used formal manners as a defence in most situations, but let his guard down with McAlmon. There are many descriptions of drinking sessions.

It was impressive to observe how everything was grist to his mill. He was constantly leaping upon phrases and bits of slang which came naturally from my American lips, and one night, when he was slightly spiffed, he wept a bit while explaining his love or infatuation for words, mere words....
Almost every night Joyce and I met for aperitifs, and...at least one night a week he was ready to stay out all night, and those nights he was never ready to go home at any hour. We talked of the way a free mind can understand the possibility of all things: necrophilia and other weird rites. We agreed in disliking mysticism, particularly the fake and sugared mysticism of many poets and writers. We spoke of what a strange man Robert Burton must have been to have compiled his Anatomy of Melancholy, and he didn't know in the end a bit more about it than we did. Sir Thomas Browne, not to speak of Ezra Pound and Eliot and Moore and Shaw we discussed, but sooner or later Mr Joyce began reciting Dante in sonorous Italian. When that misty and intent look came upon his face and into his eyes I knew that friend Joyce wasn't going home till early morning.

On several occasions, McAlmon had to carry a drunk Joyce home to the long-suffering Nora.

'Jim, you've been doin' this for twenty years, and I'm tellin' you it's the end. Do you understand? You've been bringin' your drunken companions to me too long, and now you've started McAlmon in the same way.'

Here's a story McAlmon heard from the publisher Bill Bird, about the end of an all-night drinking session at Fouquet's:


At about five in the morning Bird had managed to get Joyce into a taxi and they drove to Joyce's apartment. The apartment was five flights up and the elevator was not working. When helped out of the taxi, Joyce flopped (I know that one too.) Bird, who is by no means a hefty individual, and who was a bit of a wreck from work and worry, carried him up the five flights and felt weak and trembling at the top. Once there however, Joyce could stand up. He could even unlock the door of his apartment and enter. Once inside, he went into the bathroom, locked the door, and sulkily refused to come out.
Just before closing the bathroom door, however, he turned to Bird and said, 'You see how it is, Bird. I have brought them through the war and now they threaten to leave me.'....Nora pled; Bill argued and cajoled, but it was a quarter of an hour before Joyce would come out of the bathroom. 'Mr Bird, what are you to do with such a man?'  said Nora. 'And to think I have put up with him like this for all these years. What a damn fool his admirers would think me if they knew it all! He may be a genius to them, but look at him, what is he to me?'

Here he describes a St Patrick's Day party at the Trianon: 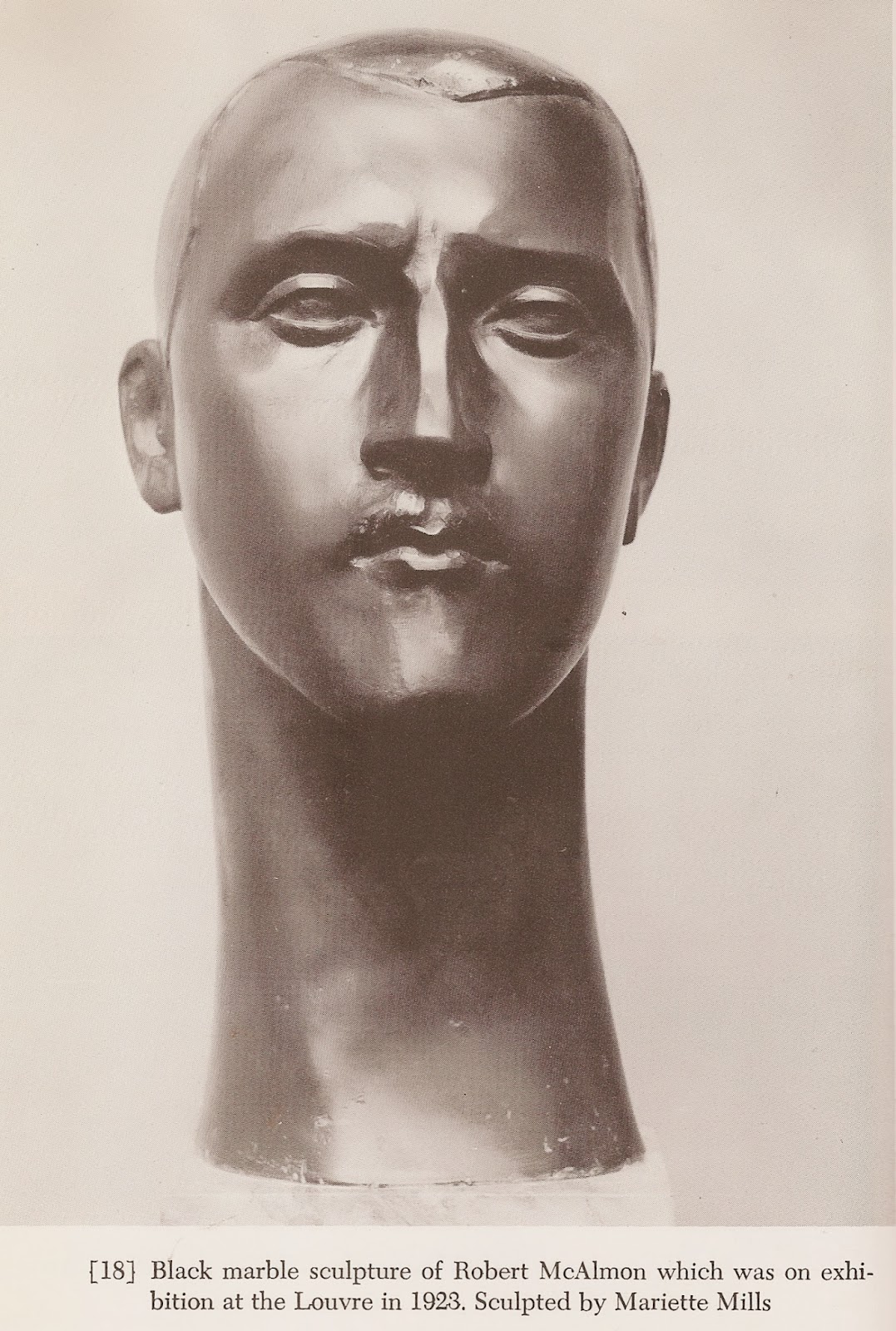 Joyce sang songs...and I broke loose with my 'Chinese Opera'. Joyce wanted me to sing it, and I did. It is the corncrake and the calliope wail of a Chinese virgin in a snowstorm, not understanding where she got her newborn babe, and the neighbour's son claims it is not his inasmuch as he never saw her before. This is a performance that has had me thrown out of several bars and most respectable households and the police of various stations know it well.
Later, when we left, Joyce wanted to climb up the lamppost. He fancied himself various kinds of dancers, tap, Russian, and belly. Nora was there however, and protest as Mr Joyce might, she got him into a taxi, and, despite his bitter wailings and protestations, drove him home.

McAlmon was so thick-skinned that he did not suspect that Joyce would mind being written about like this. He even read the manuscript to Joyce over several afternoons, expecting him to like it!  Joyce, who had always protected his respectable public image, was mortified, though he hid his feelings in front of McAlmon. According to Ellmann, he told his patroness, Harriet Shaw Weaver (who already strongly disapproved of his drinking), that the book made him feel 'actionable'.

He read the work to Joyce, who mistook his honesty for maliciousness and called it an 'office boy's revenge'.
Sylvia Beach, Shakespeare and Company

Joyce's response to the book is in Gorman's authorised biography, which you can read about here.