The Earwicker Graves in Sidlesham

Chapter two begins with a discussion of how he came by this unusual surname.

Now...concerning the genesis of Harold or Humphrey Chimpden’s occupational agnomen...and discarding once for all those theories from older sources which would link him back with such pivotal ancestors as the Glues, the Gravys, the Northeasts, the Ankers and the Earwickers of Sidlesham in the Hundred of Manhood...

Sidlesham, pronounced Sid-lesham, is a village in Sussex. It lies south of Chichester, in the Manhood Peninsula, also called the 'Hundred of Manhood' (A 'hundred' is an ancient administrative district).  The name probably comes from the Anglo-Saxon maene-wudu meaning 'men's wood' or 'common wood.'  Joyce would have discovered Sidlesham, and the name Earwicker, when he was on holiday in neighbouring Bognor Regis, in the summer of 1923. 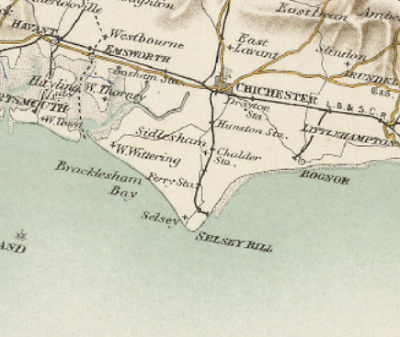 In 1961, Clive Hart visited Sidlesham and found several tombstones in the churchyard with the name 'Earwicker' on them. After making enquiries, he learned that there were still three elderly Earwickers living locally. He quotes this touching letter from Miss Gertrude Earwicker:

William Earwicker is the first one that we have known of coming to live in Sidlesham, some time in the 17 century, he died here in 1793, as a headstone in the Churchyard shows. His sons were William, John, & George, John being our grandfather, he passed on before we were born, so we did not know him. Our father Charles William used to tell us of their school days etc, he died in 1922. Our grandfather (John) bought a small farm, and built a house in 1858 Redgate Farm, the one that we sold in September, our father, and us were all born there, I had no other home, but as we are getting to our seventies, we could not carry on, and our brother Arthur has no children to carry on either. Our great uncle had a little school for the boys of Sidlesham at his cottage, he had been in the Army, in the 52nd Foot Regiment, educated himself in his travels, I believe taught them quite well in reading, writing, and arithematic, there was not a school here then, afterwards they walked daily to Chichester, (five miles) to finish their education, our father, and his brother Thomas, and John were among the boys. Our grandfather (John) used to sound the note on the pipe for the singing in the Church, (no organ) We were told that he was accidentally shut in the Church one night, he had gone into the belfry to look for an owl that was lodging there. Not knowing how to get out he rang the bells furiously, which soon brought someone to his rescue ... Earwickers now in Sidlesham, are myself Gertrude my sister Nellie Law, (widow) and my brother Arthur Earwicker.

quoted by Clive Hart, 'The Earwickers of Sidlesham' A Wake Digest, 1968

Hart suggested that Joyce had found the name Earwicker when visiting the churchyard. However, Peter Timmerman later discovered that Joyce had used a written source, A Pictorial and Descriptive Guide to Bognor, 1923, which has this sentence:

Sidlesham Church is an Early English structure worthy of notice, and an examination of the surrounding tombstones should not be omitted if any interest is felt in deciphering curious names, striking examples being Earwicker, Glue, Gravy, Boniface, Anker, and Northeast.
'The First Guide to Finnegans Wake', A Wake Newslitter,  June 1979

By chance, my sister Sarah and her husband Ben have just bought a coastguard's cottage in Selsey, which is only a short distance from Sidlesham. Going to visit for the first time this Saturday, Lisa and I arranged to meet them in the churchyard, to look for Earwickers, Glues, Gravys, Ankers and Northeasts. 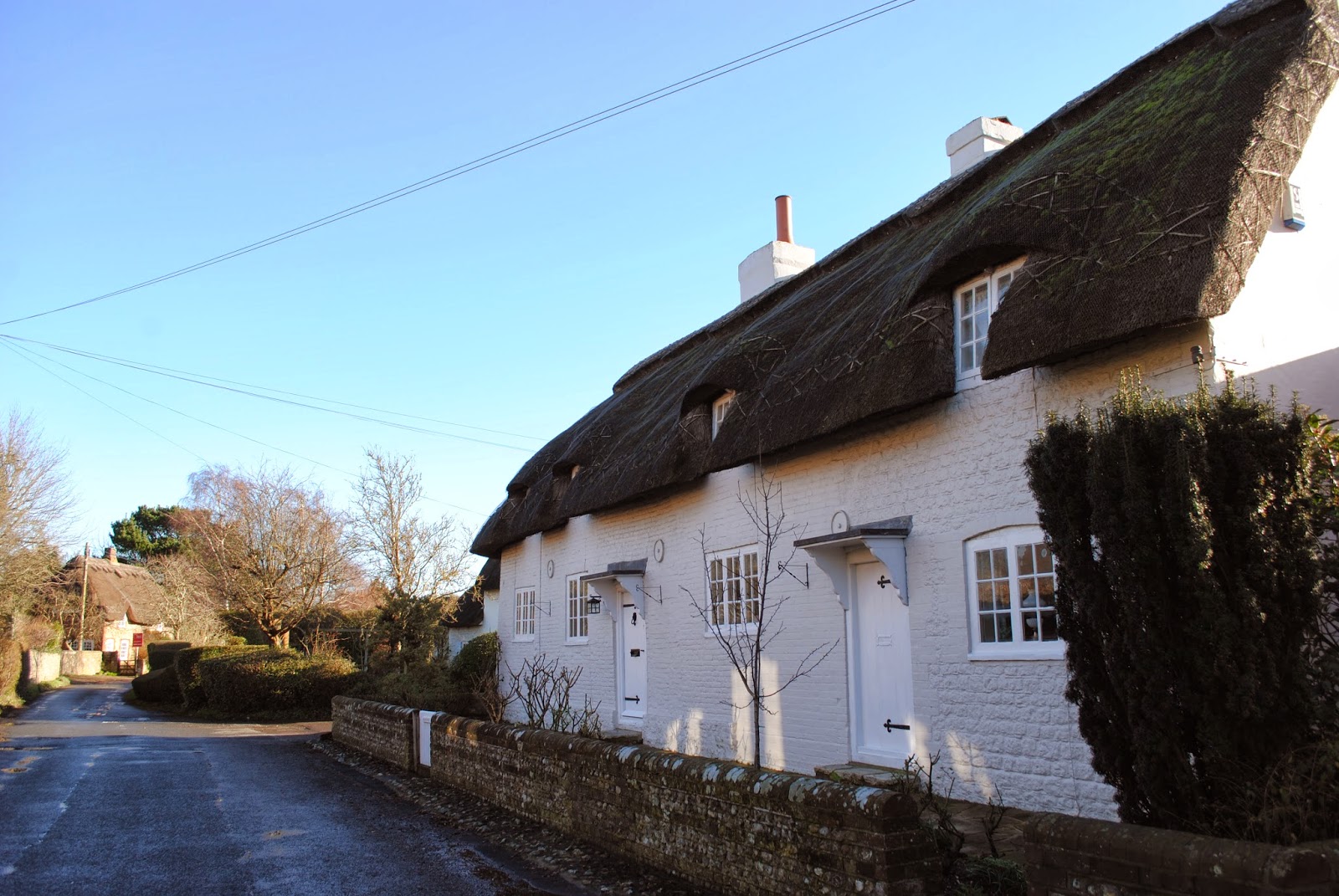 We got the bus from Chichester to Sidlesham, a picture postcard village, of thatched white-painted flint and pebble houses.

This is Church Lane, which led us to the Church of St Mary, where the Earwickers are buried.

Here's the church, which is mostly thirteenth century. 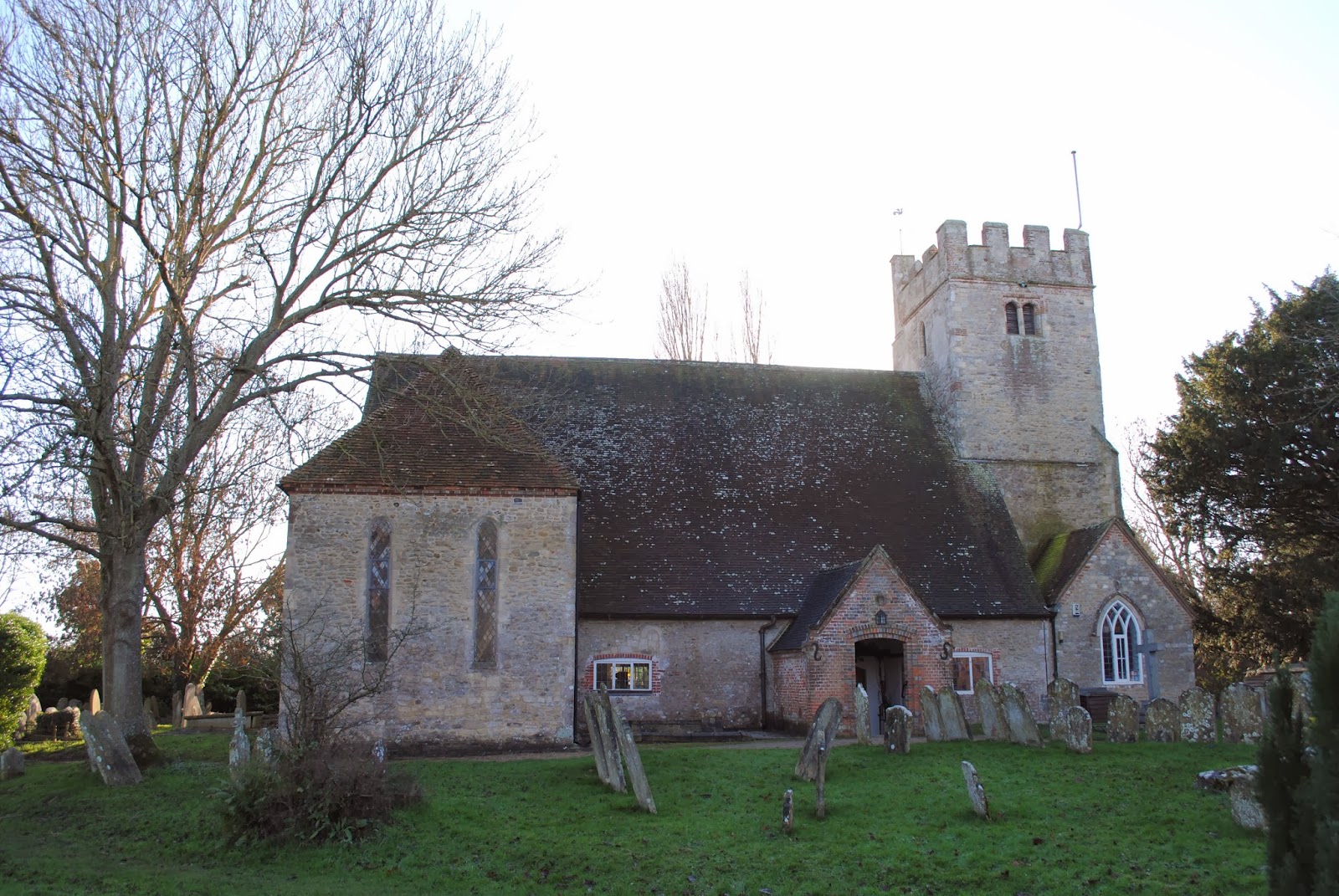 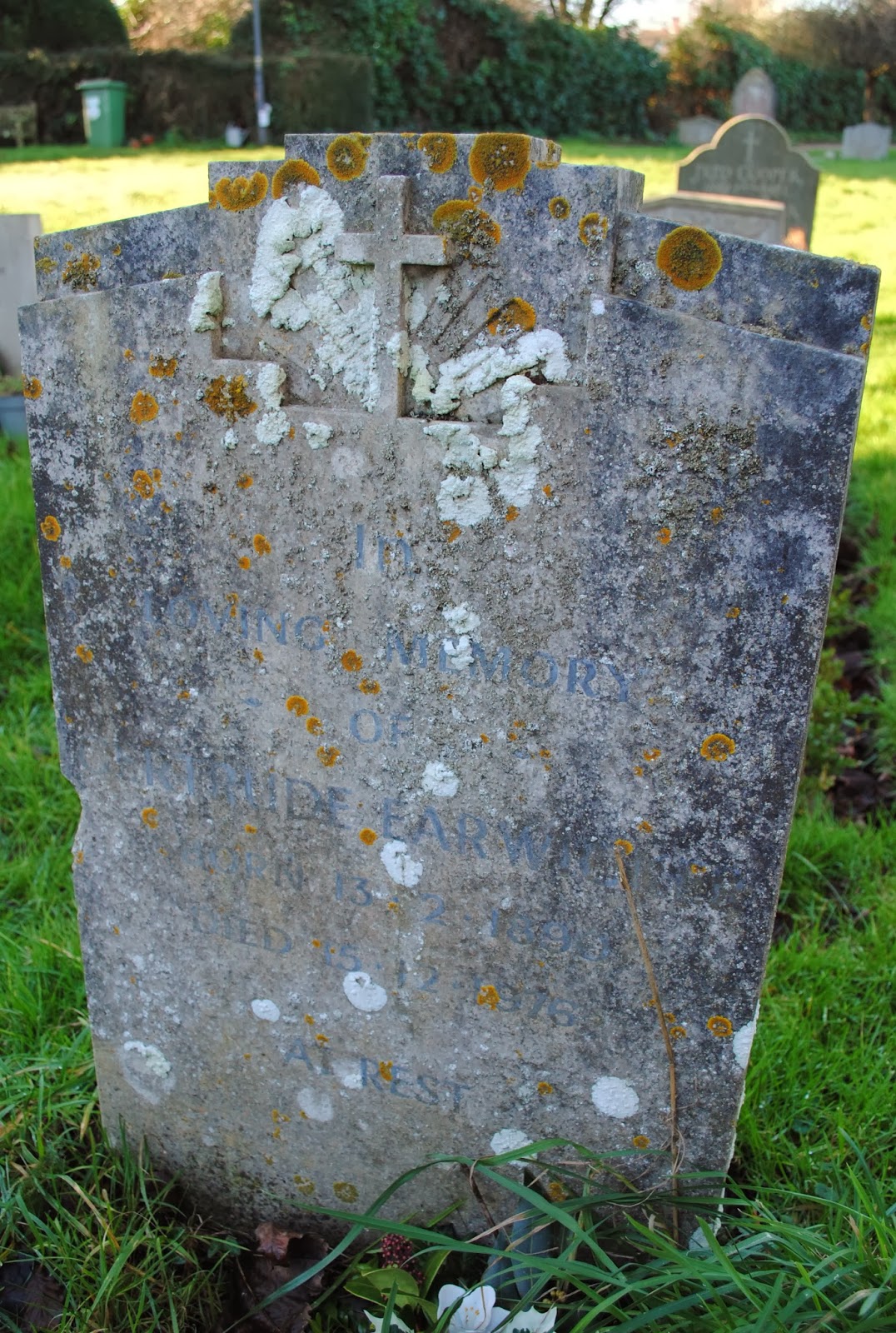 Lisa and I got to the Church first, and started inspecting the gravestones. After a few minutes, I heard Lisa shout, 'I've found an Earwicker!'

By chance, it was the grave of Gertrude Earwicker, author of the letter to Clive Hart, who died in 1976, aged 86. 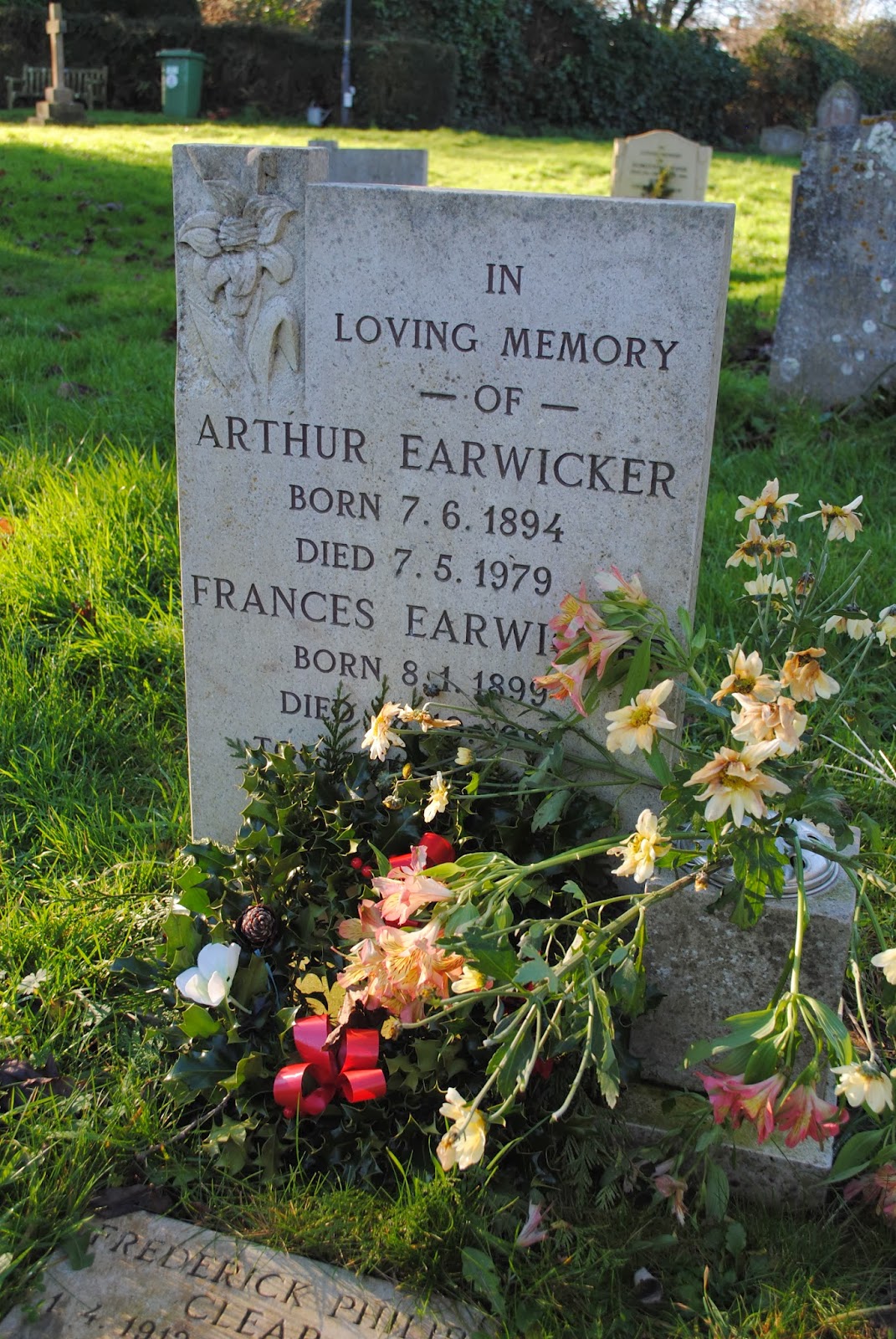 A few feet away, we found Gertrude's younger brother Arthur - perhaps the last of the Sidlesham Earwickers, though flowers are still placed on the grave.


We discovered that they had had an older brother, William, who died aged just 16 in 1900. 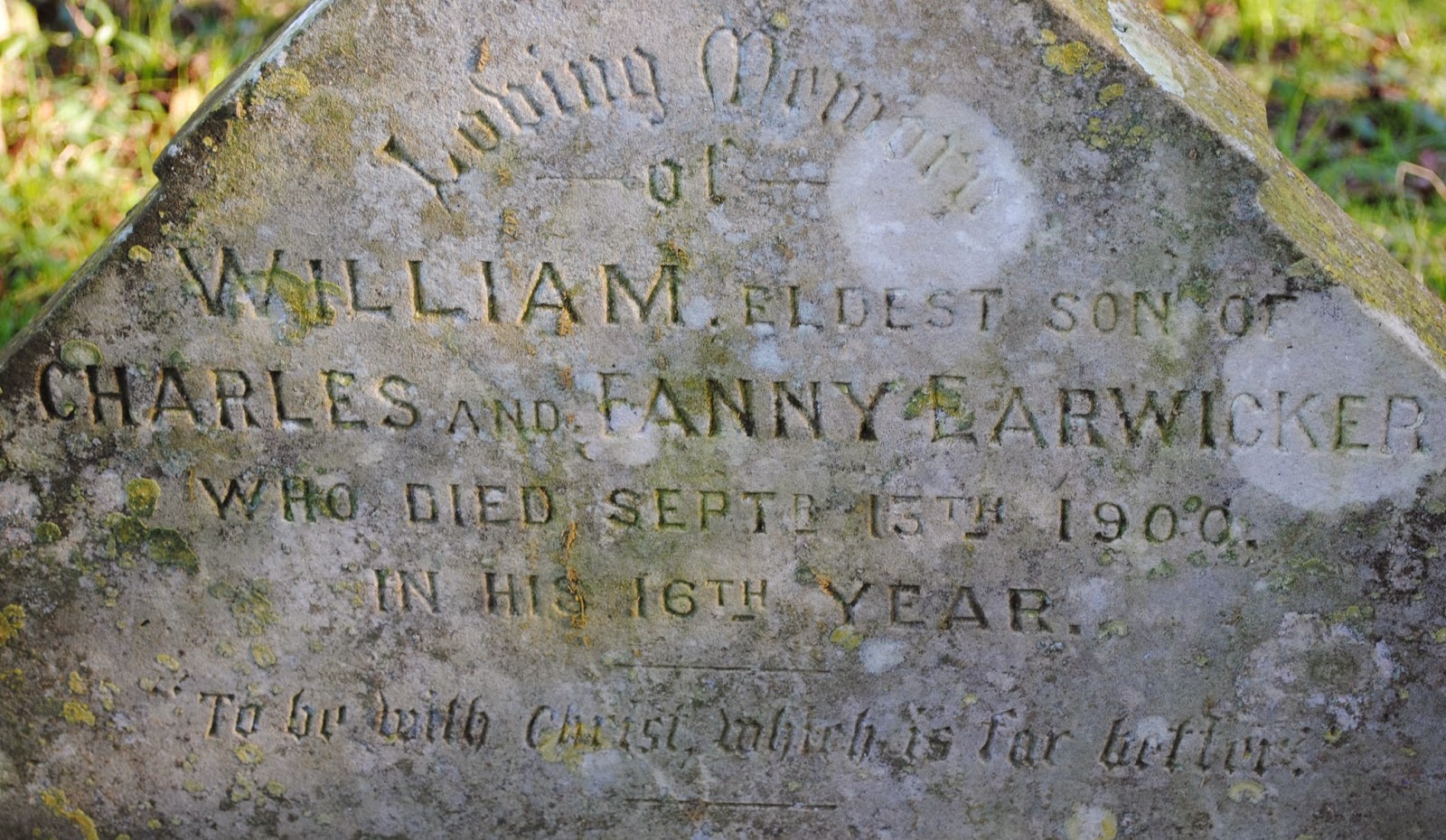 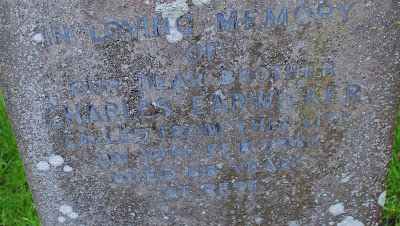 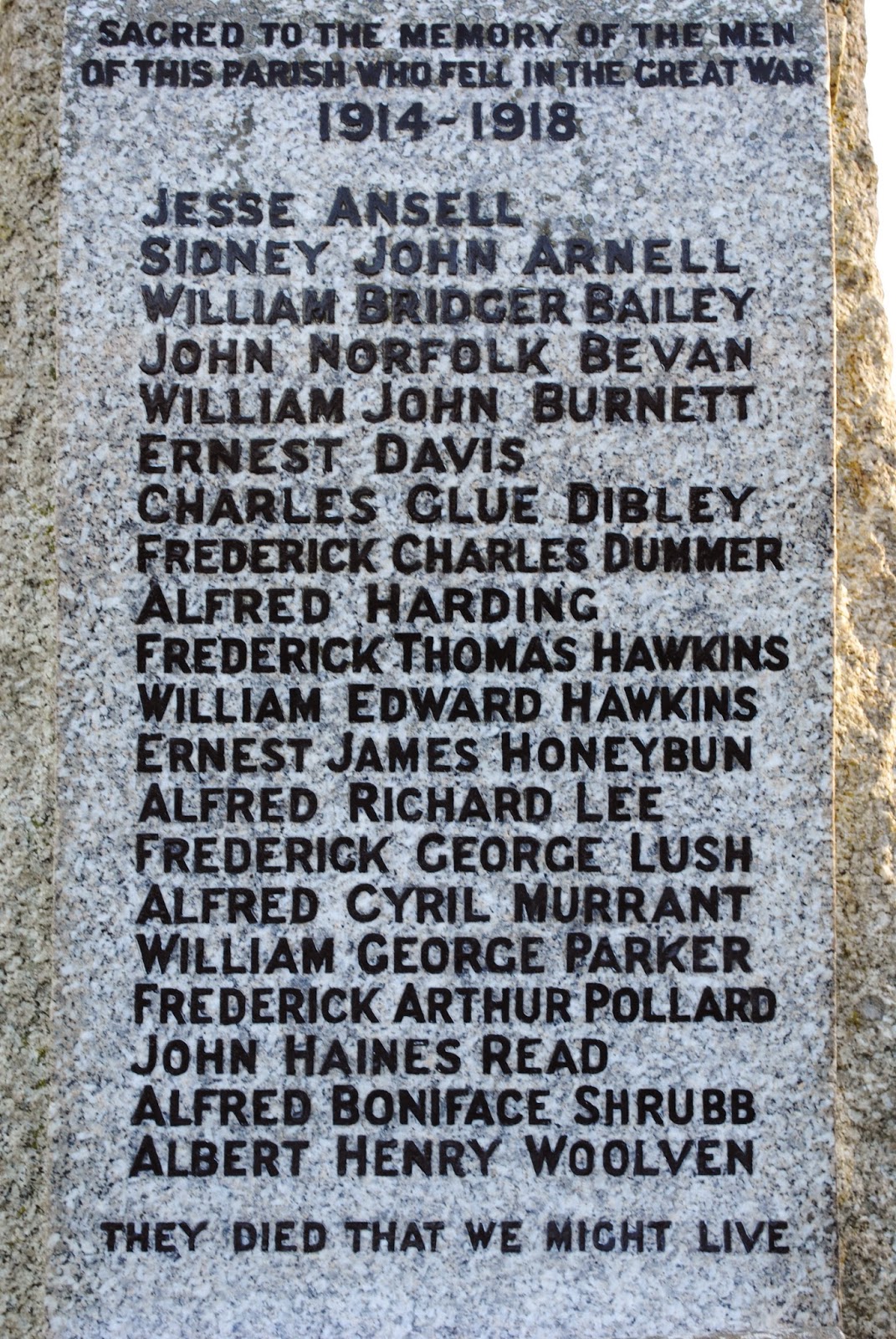 We were now joined by Sarah, Ben and their daughter Anna, and I got them hunting for Earwickers, Glues, Gravys, Northeasts and Ankers.


The only one of us who had any luck was Lisa, who has a newfound skill in deciphering gravestones. Next she found George Earwicker (1802-89), the brother of Gertrude's grandfather. 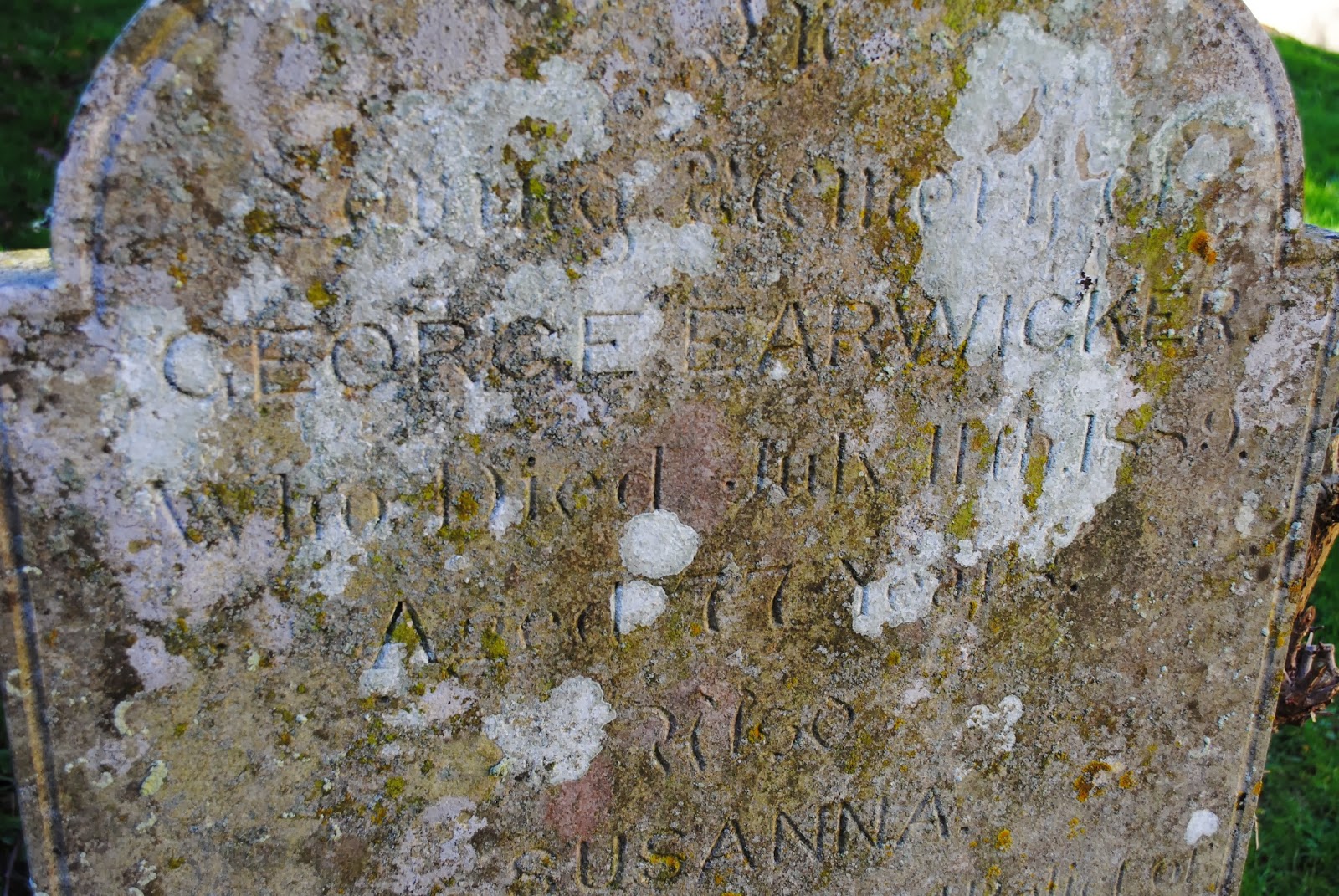 This was followed by her discovery of the 1881 grave of Isaac Glue! 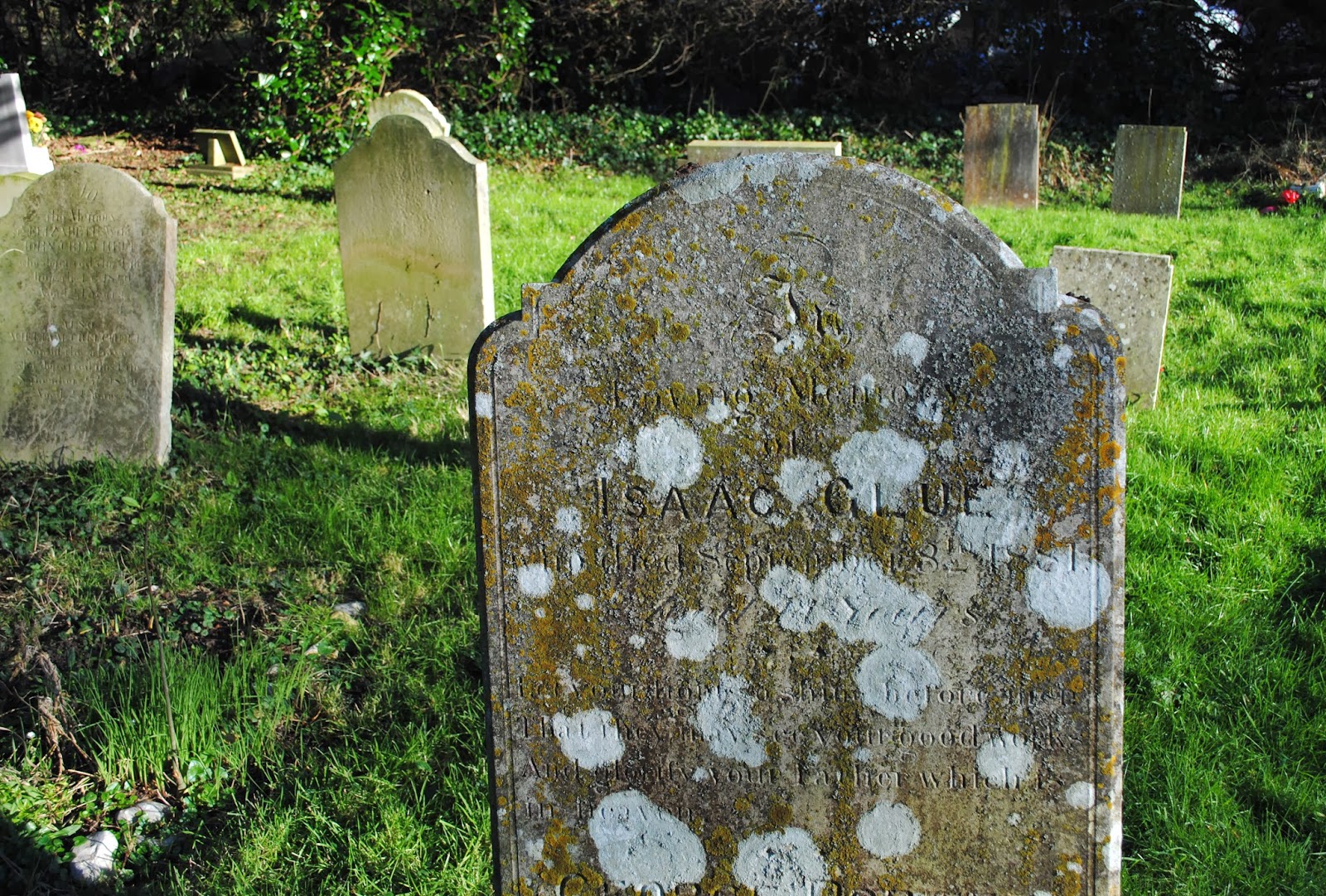 Lisa then disappeared round the back of the Church, where she found the very first Earwicker grave, belonging to William, who died in 1793. 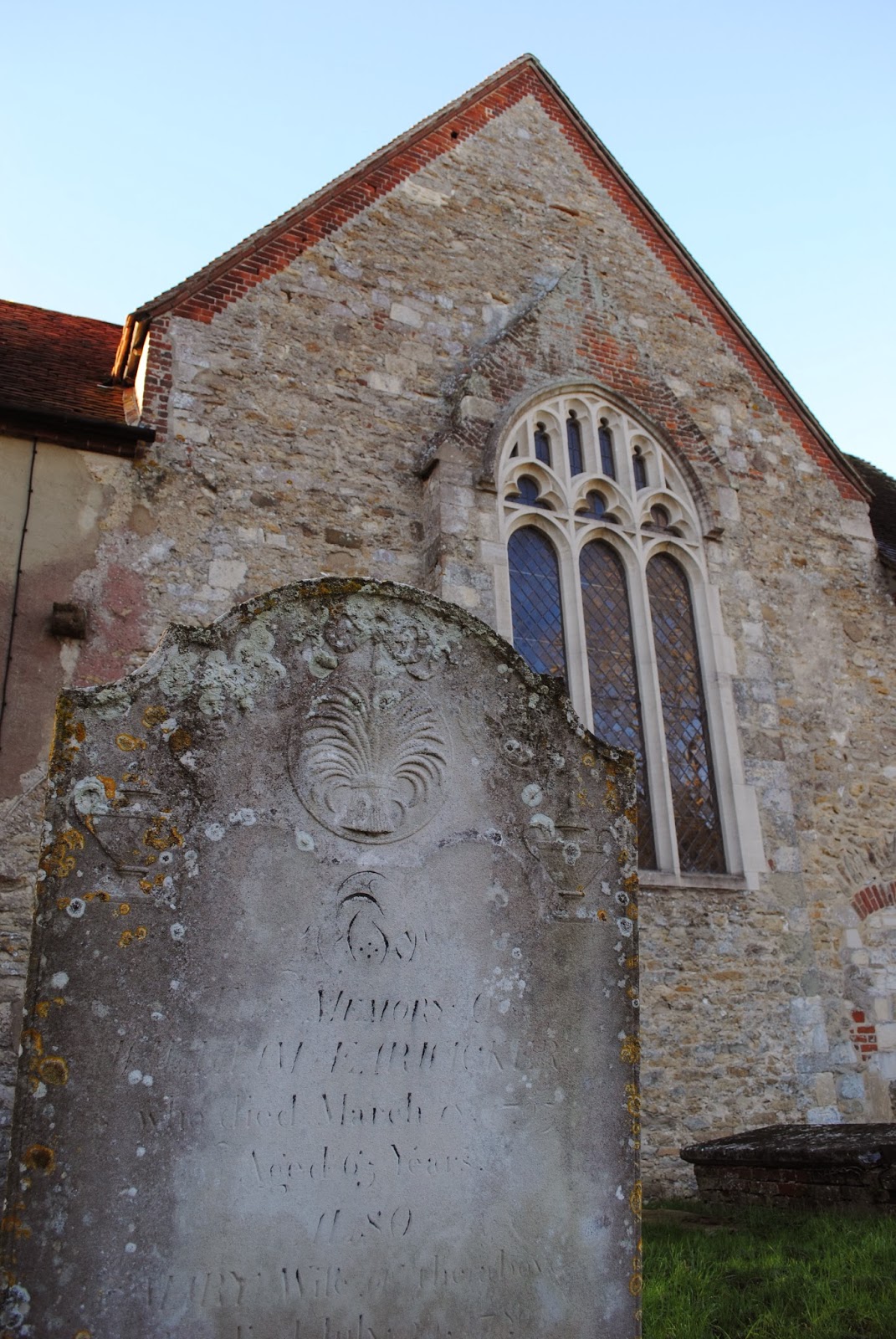 We didn't find any Gravys, Ankers or Northeasts, though we did come across a whole row of tombstones of several generations of men, all called 'Barzulai Porder'.

In Finnegans Wake, Joyce tells us that Earwicker is his hero's 'occupational agnomen', a surname which began as a nickname. He gives us a shaggy dog story about HCE receiving the name from a visiting king, who comes across him carrying a flowerpot on a pole, used for trapping earwigs. The longsighted king mistakes this for a lobster pot, and asks him what bait he's using:

On his majesty, who was, or often feigned to be, noticeably longsighted from green youth and had been meaning to inquire what, in effect, had caused yon causeway to be thus potholed, asking substitutionally to be put wise as to whether paternoster and silver doctors were not now more fancied bait for lobstertrapping honest blunt Haromphreyld answered in no uncertain tones very similarly with a fearless forehead: Naw, yer maggers, aw war jist a cotchin on thon bluggy earwuggers. 31.03-11

I wonder if HCE's reply is in a Sussex accent?

Peter Timmerman discovered that the lobstertrapping and paternosters both come from the Guide to Bognor:

At the entrance to the Pier, and at other spots on the Parade, are numbers of the Wicker Traps, or ‘Pots,’ in which lobsters, crabs and prawns are taken. These traps are made by the fishermen. The withes are cut just before, or just after, Christmas, and are bought from neighbouring farmers … In shape, they much resemble the old-fashioned bee-hives. At the top is an entrance for the victim.

Fishing with ‘Paternoster’ is recommended from the Pier, as various depths of the bait will suit the habits of different fish.

The king then makes an incomprehensible joke to his attendants:

Holybones of Saint Hubert how our red brother of Pouringrainia would audibly fume did he know that we have for surtrusty bailiwick a turnpiker who is by turns a pikebailer no seldomer than an earwigger.

So that's how he came to be called Earwicker!

Sending the piece to his patron, Joyce called it an 'extract of earwigs':

'I hope my extract of earwigs may give you some mildly comic relief.'

According to Ellman's biography, Joyce talked about earwigs with Mrs Myron Nutting:

He and Mrs Nutting talked then about the earwig, which he associated with his hero, Earwicker; she recalled that a Yorkshire name for earwig is 'twitchbell'. 'Will you give me that?' said Joyce, much pleased. He remarked than an old legend recounted that Cain got the idea of burial from watching an earwig beside his dead brother Abel.

At this point, there's a footnote on earwigs:

Joyce investigated the earwig carefuly, even to the point of writing the entomological laboratory of the Museum National d'Histoire Naturelle for papers on forficula. He liked the French word  for earwig, perce-oreille, and quickly assiciated it with Percy O'Reilly, a famous player from West Meath in the All Ireland Polo Club in 1905. Then he wrote 'The Ballad of Persse O'Reilly' (FW 44-6) 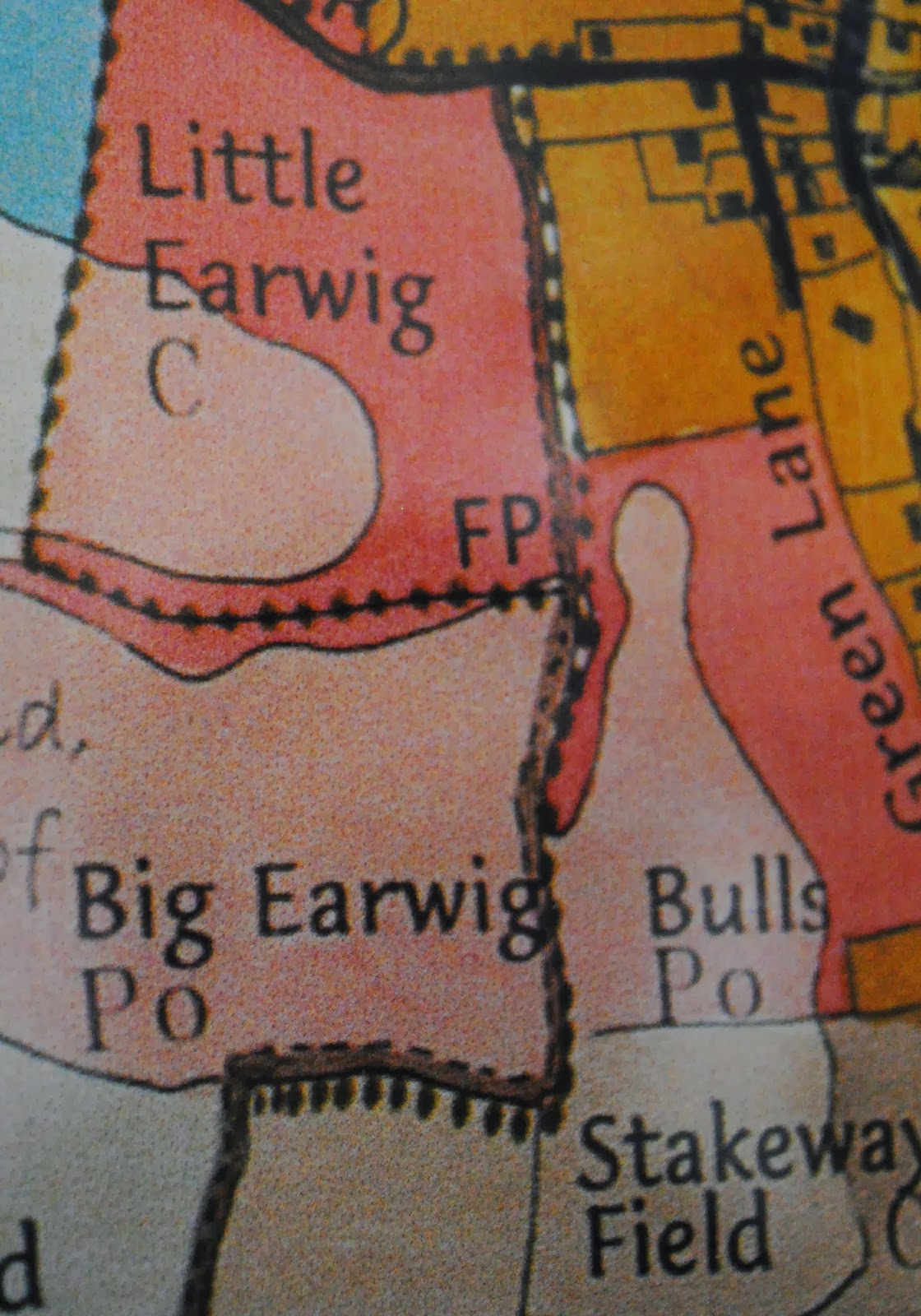 I've gone into this earwig business at length to explain my astonishment at another Wakean synchronicity. After looking around the churchyard, we went inside the Church, and found a beautifully drawn map of the parish.

Look at the names of two of the local fields!

For Joyce, there was much more to this name than earwig business. He owned a copy of Ernest Weekley's The Romance of Names, 1922, which has a chapter on the development of Anglo-Saxon names. It includes an entry for 'Eoforwacer, now Earwaker'.

Leaving the church, we noticed a strange carving of a man's head above the door. His eyes are closed as if he's asleep.  I imagined him as the dreamer of Finnegans Wake, or maybe Humphrey Chimpden Earwicker himself! 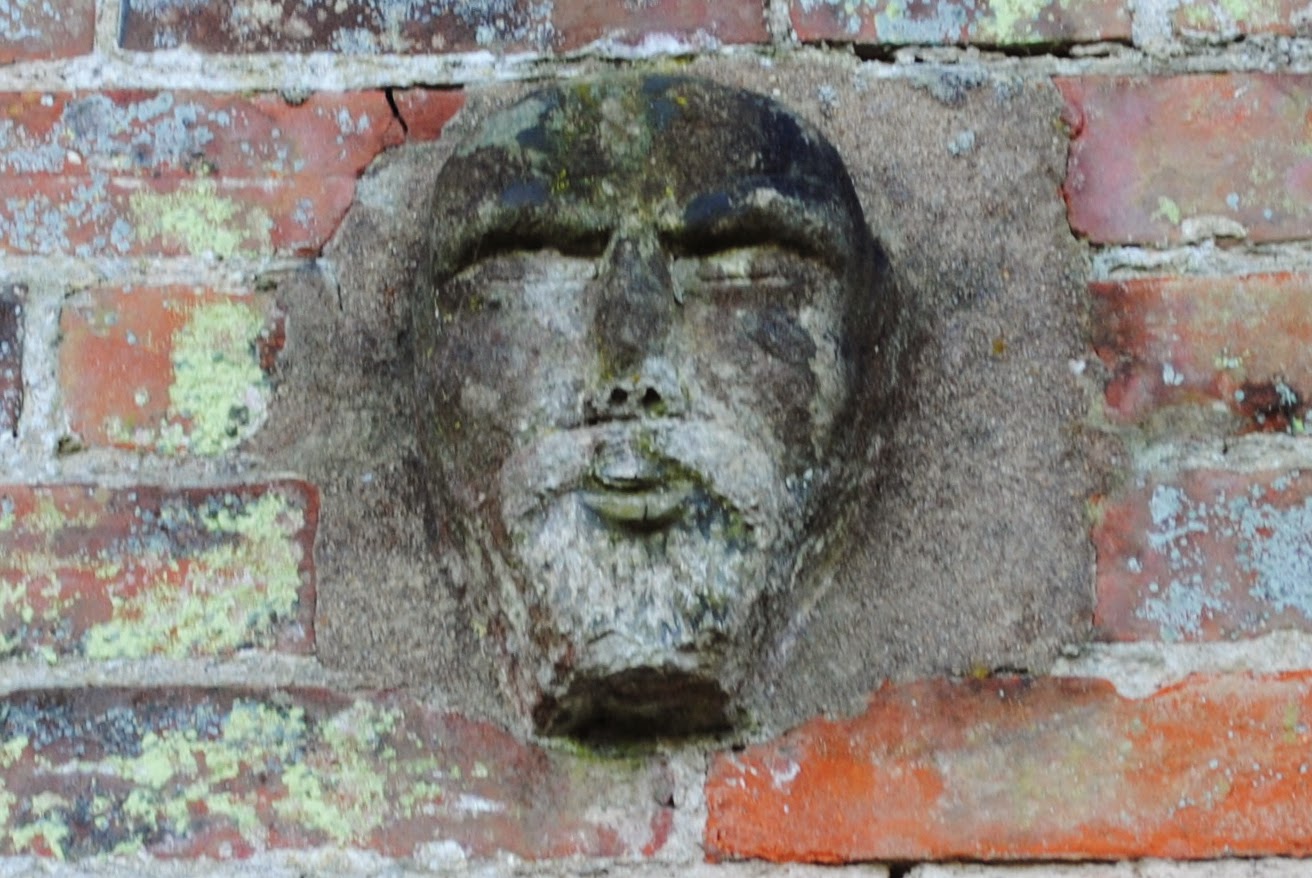