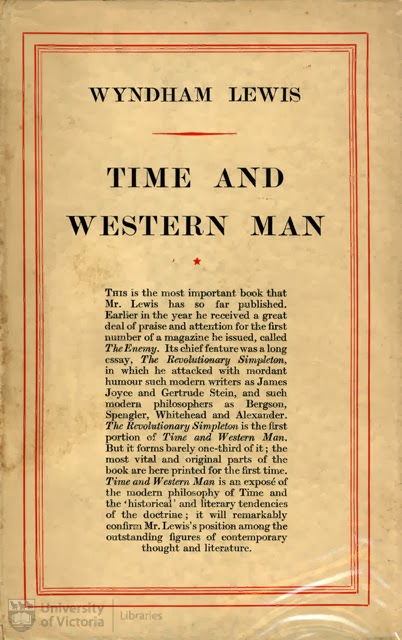 In 1927, Percy Wyndham Lewis made a blistering attack on Joyce in Time and Western Man. It comes in the final chapter, 'An Analysis of the Mind of James Joyce':

Joyce is the poet of the shabby-genteel, impoverished intellectualism of Dublin. His world is the small middle-class one, decorated with a little futile ‘culture,’ of the supper and dance-party in The Dead. Wilde, more brilliantly situated, was an extremely metropolitan personage, a man of the great social work, a great lion of the London drawing-room. Joyce is steeped in the sadness and the shabbiness of the pathetic gentility of the upper shopkeeping class, slumbering at the bottom of a neglected province; never far, in its snobbishly circumscribed despair, from the pawn-shop and the ‘pub.’

Lewis also mocked Joyce's manners, his 'air of genteel decorum and bienséance of the irish middle-class, with his ‘if you pleases’ and ‘no thank-yous,’ his ceremonious Mister-this and Mister-that'

Here Lewis is remembering his first meeting with Joyce, when he visited him in Paris in 1920, with T.S.Eliot to deliver a pair of brown shoes (from Pound). It's described in Lewis's 1937 memoir, Blasting and Bombardeering, where he mocks Joyce as a bogtrotting provincial.  Joyce behaved with 'punctilious reserve', which Eliot found arrogant. Lewis said:


'You think he is proud as Lucifer?'
'I would not say Lucifer!' Eliot was on his guard at once...
'You would not say Lucifer? Well I daresay he may be under the impression that he is being 'as proud as Lucifer', or some bogtrotting humbug of that order. What provincials they are, bless their beastly brogues!'
'Provincials - yes!' Eliot agreed with contemptuous unction. 'Provincials.'
'However he is most polite.'
'He is polite.'
'I have never succeeded in getting out of the door behind him, have you? He is very You First. He is very After you!'
'Oh yes. he is polite, he is polite enough. But he is exceedingly arrogant underneath. That is why he is so polite. I should be better pleased if he were less polite.'

Joyce, who told both Arthur Power and Louis Gillet, 'I'm only a simple middle class man',
was stung by Lewis's assumption of social superiority. He responded to Lewis's attack by putting him in Finnegans Wake, where he is a model for Shaun, the enemy of Shem/Joyce.


We first find Shaun attacking Shem as bourgeois on page 113:

‘I am a worker, a tombstone mason, anxious to pleace averyburies and jully glad when Christmas comes his once ayear. You are a poorjoist, unctuous to polise nopebobbies and tunnibelly soully when 'tis thime took o'er home, gin. We cannot say aye to aye. We cannot smile noes from noes.’ 113.34

‘You are a poorjoist’ – poor Joyce and bourgeois – unlike the ‘worker’, who’s speaking.

This is parodied in the Wake, with a play on Lewis's name in 'windy Nous':

There was not very much windy Nous blowing at the given moment through the hat of Mr Melancholy Slow! 56.29

The most extensive portrait of Lewis is as Professor Jones/Shaun, on pages 149 onwards. Writing to Harriet Shaw Weaver, Joyce described this as Shaun 'in his know-all profoundly impressive role for which an ‘ever devoted friend’ (so his letters are signed) unrequestedly consented to pose’ (L.1.258)

Lewis's way of signing his letters to Joyce turns up in Finnegans Wake.

To Joyce, Lewis was another of his long list of betrayers.

There are several references to Jews in Professor Jones' attack on Shem ('Gentileman...Judapest' etc) -  Lewis said that Ulysses tells us nothing about Jews. Lewis had the casual antisemitism of his class (like Eliot and Pound, but unlike Joyce) - though he repudiated antisemitism in 1939, with a book ironically called The Jews: Are they Human?

Lewis's book is an attack on what he called the ‘time-cult’ of the philosopher Henri Bergson, and the novelists Proust and Joyce. He saw this ‘time cult’ in the representation of flux and the unconscious in Ulysses. Lewis stood for stability, the conscious, and the external, spatial world of objects – he was a painter, after all.

There’s a good summary of Lewis's arguments by Kirsty Dooston. She writes: ‘Through recreating the process of memory and free association, authors like Joyce were relying on things in the past which no longer existed except in the mind (that is in time and not in space). Lewis saw this as an attempt to bring dead matter to life - an attempt to disguise the past as the present.'

Lewis wrote that Ulysses 'lands the reader inside an Aladdin's cave of incredible bric-à-brac, in which a dense mass of dead stuff is collected, from 1901 toothpaste, a bar or two of sweet Rosie O'Grady, to pre-nordic architecture. An immense nature-morte is the result. This ensues from the method of confining the reader in a circumscribed psychological space into which several encyclopaedias have been emptied....It is a suffocating, moeotic expanse of objects, all of them lifeless, the sewage of a Past twenty years old.'

Joyce echoes this at 108.27: 'this Aludin's Cove of our cagacity'.
It strikes me that Lewis has given a good description of Ulysses, apart from the words 'dead', 'suffocating', 'confining', 'circumscribed' and 'lifeless'. The opposite is true - Ulysses, more than any other book, conveys a sense of what it is to be alive. It's because it's an Aladdin's cave of bric-à-brac that I love Ulysses!

(Ulysses) will remain, eternally cathartic, a monument like a record diarrhoea....He collected like a cistern in his youth the last stagnant pumpings of Victorian Anglo-Irish life. This he held steadfastly intact for fifteen years or more—then when he was ripe, as it were, he discharged it, in a dense mass, to his eternal glory. That was Ulysses.

Lewis's 'Analysis of the Mind of James Joyce' is parodied on page 292, where, following a mention of Spice and Westend Woman we peep into Shem's brain, and find it full of 'convulvuli of times lost or strayed':

an you could peep inside the cerebralised saucepan of this eer illwinded goodfornobody, you would see in his house of thoughtsam (was you, that is, decontaminated enough to look discarnate) what a jetsam litterage of convolvuli of times lost or strayed, of lands derelict and of tongues laggin too, longa yamsayore, not only that but, search lighting, beached, bashed and beaushelled å la Mer pharahead into faturity...


There's a similar description by Shaun of the contents of Shem's house, which is also his brain, in the Shem the Penman chapter: 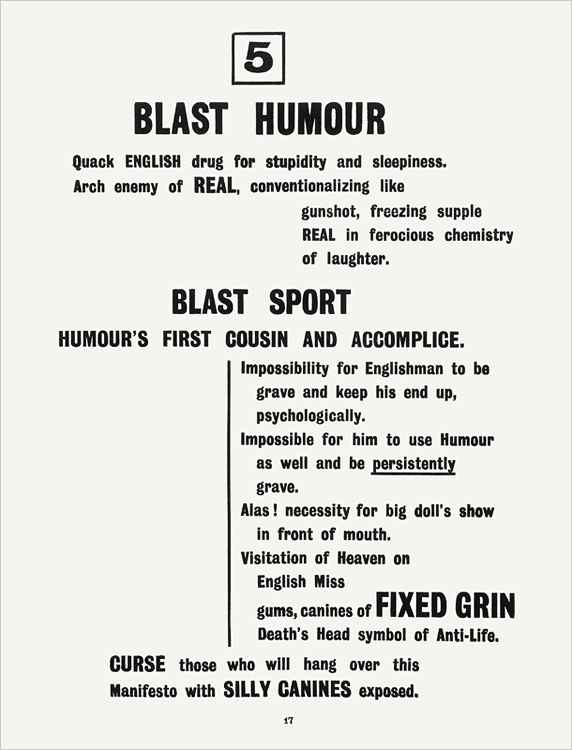 Lewis had his own magazine, Blast, where he blasted everything he hated (left).

We find Blast in the Shem the Penman chapter, where Shaun describes Shem as 'a boosted blasted bleating blatant bloaten blasphorus blesphorous idiot who kennot tail a bomb from a painapple'. 167.13

Joyce also answered Lewis's criticism in his fable the Ondt and the Gracehoper, where Joyce/Shem/the feckless grasshopper/Time addresses Lewis/Shaun/the respectable ant/Space. Time gets the last word:


Your feats end enormous, your volumes immense,
(May the Graces I hoped for sing your Ondtship song sense!),
Your genus its worldwide, your spacest sublime!
But, Holy Saltmartin, why can't you beat time? 419.5-8

On page 151, Professor Jones/Shaun/ Lewis, who's been boasting about his 'spacious immensity', triumphs over his academic opponents, the time philosophers:

I need not anthrapologise for any obintentional (I must here correct all that school of neoitalian or paleoparisien schola of tinkers and spanglers who say I'm wrong parcequeue out of revolscian from romanitis I want to be) downtrodding on my foes. 151.08-12

Primary meaning: I need not apologize for any unintentional (I must here correct that school of thinkers/tinkers who say I’m wrong) treading down on my academic foes.

school of neoitalian of paleoparisian schola of tinkers and spanglers – the new Italian and old Parisian schools of thinkers – perhaps the great medieval scholastic universities – Paris, Bologna and Padua.
‘Tinkers’ is an Irish snobbish term of abuse, from the Irish travelling people (cf ‘What did those tinkers in the city hall at their caucus meeting decide about the Irish language?’  Cyclops).

Spanglers – ‘Spengler’ is German for tinsmith but also suggests Oswald Spengler, author of The Decline of the West, described by Lewis as the 'perfect model of a time-book'.


Ironically, Joyce would have agreed with this definition; he saw himself as a realist, not a romantic:

‘In realism you are down to facts on which the world is based: that sudden reality which smashes romanticism into a pulp. What makes most people’s lives unhappy is some disappointed romanticism, some unrealizable or misconceived ideal. In fact you may say that idealism is the ruin of man, and if we lived down to fact, as primitive man had to do, we would be better off. That is what we were made for. Nature is quite unromantic. It is we who put romance into her, which is false attitude, an egotism, absurd like all egotisms. In Ulysses I tried to keep close to fact.’ To Arthur Power

‘downtrodding on my foes’ also suggests treading on my toes.

THE UNCLE CHARLES PRINCIPLE
Wyndham Lewis was a bad critic of Joyce's prose. For example, in A Portrait, Joyce writes:

'Every morning...Uncle Charles repaired to his outhouse...'

Lewis wrote, 'People repair to places of fiction of the humblest order.'

Note again the snootishness of Lewis's criticism - 'fiction of the humblest order'.

He didn't realise that Joyce chose 'repaired' deliberately because it was the word that Uncle Charles himself would have used. Hugh Kenner, in his wonderful book, Joyce's Voices, uses this as the basis for what he calls the 'Uncle Charles principle: the narrative idiom need not be the narrator's.' Kenner says that Joyce's words 'are in such delicate equilibrium, like the components of a sensitive piece of apparatus, that they detect the gravitational field of the nearest person.' His example is the opening of The Dead: 'Lily, the caretaker's daughter, was literally run off her feet' - ''literally'' reflects not what the narrator would say (who is he?) but what Lily would say:''I am literally run off my feet''.'

Joyce said to Frank Budgen, ‘Allowing that the whole of what Lewis says about my book is true, is it more than ten per cent of the truth?’(James Joyce and the Making of Ulysses)

There's some very odd spaces in this post - I can't seem to get rid of them! Is this interference from Wyndham Lewis, the space man?!