Here's a new film, by Tracy Drew, of the artist Marcia Farquhar reading the closing pages of Ulysses, the thoughts of Molly Bloom before she falls asleep. It was filmed at Tanya Peixoto's wonderful bookartbookshop in Pitfield Street, London. This is the place to go for artists' books and small press publications, especially books like these beauties from Atlas Press.

The bookshop is also the headquarters of the London Institute of 'Pataphysics, Alfred Jarry's 'science of imaginary solutions' which is why you can see a painting of Jarry on the wall in the film's opening. 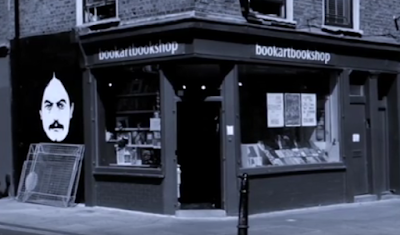 There's a tradition in the bookshop that Marcia performs the complete final chapter of Ulysses on Bloomsday. Tanya provides Banbury cakes (in honour of Bloom's gift to the seagulls by the Liffey). 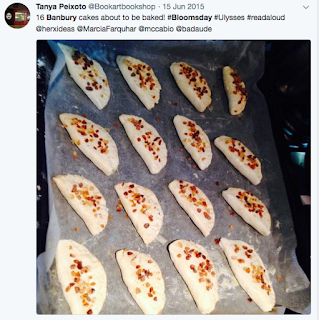 Wait. Those poor birds.
He halted again and bought from the old applewoman two Banbury cakes for a penny and broke the brittle paste and threw its fragments down into the Liffey. See that? The gulls swooped silently two, then all, from their heights, pouncing on prey. Gone. Every morsel.
Aware of their greed and cunning he shook the powdery crumb from his hands. They never expected that. 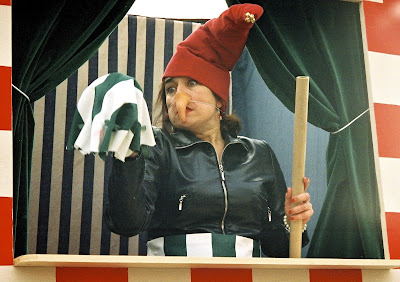 Lisa and I have been fans of Marcia's work ever since 2005, when we came upon her performing her Punch and Judy show, 'The Cabinet of Horribly Violent Glove Puppets', at the De La Warr Pavilion, Bexhill. 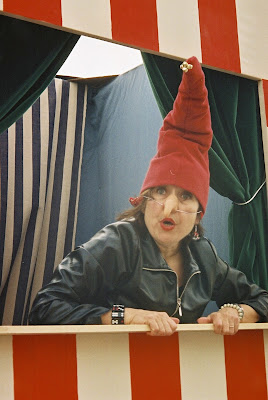 This gave us the idea to become Punch and Judy for our 2012 Christmas card. 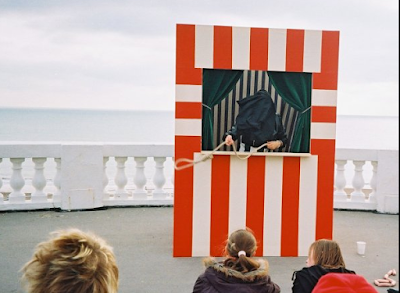 Marcia's work often involves story telling, which she is able to do spellbindingly and at epic length,.  For the 30th anniversary of the National Revew of Live Art, in Glasgow in 2010, we saw her give a 30 hour talk, 'ruminating about the events of the last 30 years'. 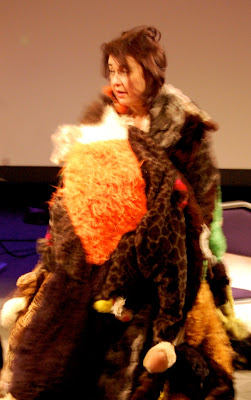 Here she is, 28 hours in, wearing an 'arte povera' homemade fur ball.

She played records on a dansette, including 'Puppet on a String', illustrating a story about trying to get Sandie Shaw's autograph. Later, she put on the Pistols 'God save the Queen' while talking about Stuart Brisley who would play the National Anthem repeatedly at the ICA, to annoy audiences who were then expected to stand for it.

'There are hours of anecdotes, spattered with a thousand quotable lines ('I was accused unfalrly of being a shaman and went into a lavatory and cried', and, referring to Stuart Brisley, 'He's the one who sat in offal and vomited from the top of a tower')'

Someone brought in a load of balloons from another performance and gave them to her. 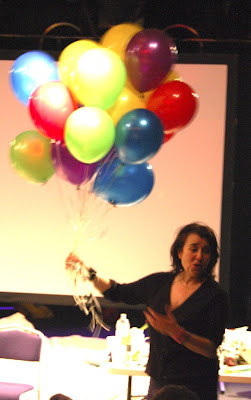 Lisa suggested, 'We could stamp on them!'
Marcia replied, 'Or we could suck them!'
Which she then did.... 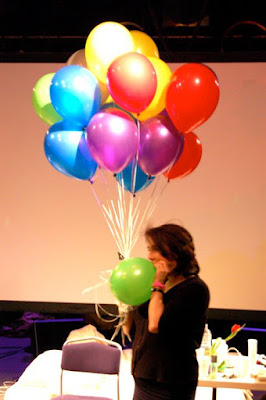 She didn't think it was working and said, 'Perhaps it's not helium!' - which came out in a squeaky voice. 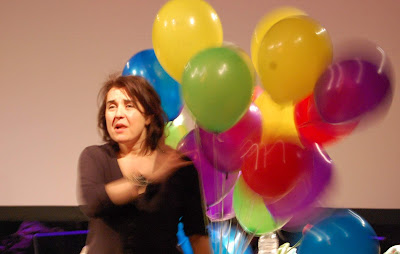 At the very end,  she played 'God save the Queen' again, and we all stood and cheered. 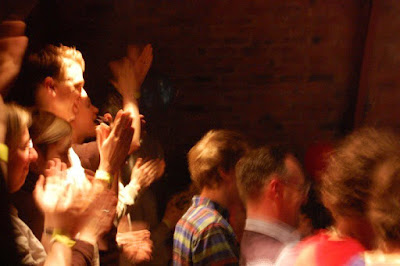 'Farquhar's stage presence is difficult to pin down. Her performances aren't about stories or props, but a magical charisma that radiates between the past she describes and the audience in the here and now.'  Mary Patterson

Here's a photo I took at another performance, 'Recalibrating Hope', at the Chelsea Theatre in 2015, which Lisa reviewed here.


Until the end of this month, CGP London is celebrating Marcia with Difficuλt, the first 'non survey of her work.' Tracy Drew's Yes film is part of The Dog's Bolex, a group of videos made in collaboration with artist film-makers, which are being shown in the gallery.

'Works from Farquhar’s extensive ‘repertoire’ from the 1980s to now will be re-imagined, nestled alongside recent and new work created for the occasion. Actions and performances will occur throughout the show, the artist will most certainly be present; appearing to show and tell as the tour guide of her own relics via spontaneous actions, situations, interruptions and habitations on Fridays and Sundays throughout the exhibition.'

We saw one of Marcia's performances at CGP yesterday, when we found her resurrecting the disused fountain of the park lido for an audience of pataphysicians and passers by. 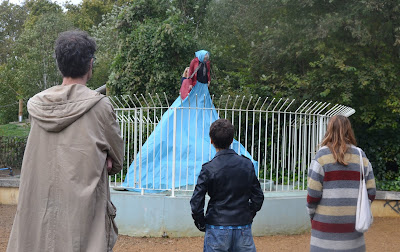 Here she is in an ascension pose 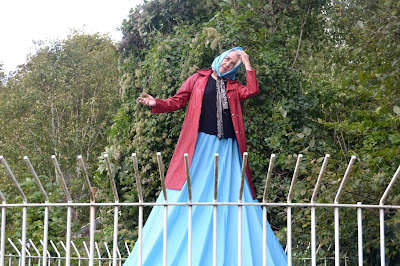 'Fountain' was inspired by the old knitted doll toilet roll covers, by Winnie in Samel Backett's Happy Days, and the fact that she likes to spout. 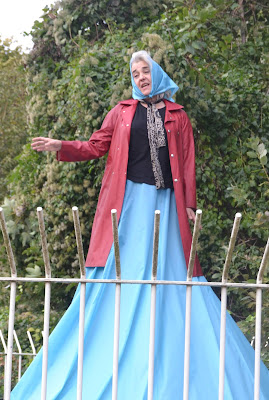 A high wind was blowing, and Marcia hates heights. 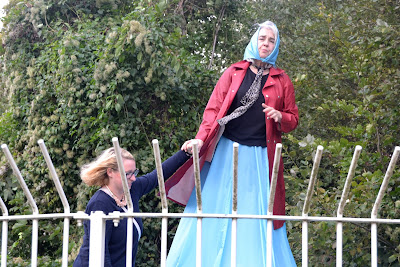 She said, as a young woman, she didn't understand Happy Days until her mother told her, 'I do - I'm up to my waist already!' 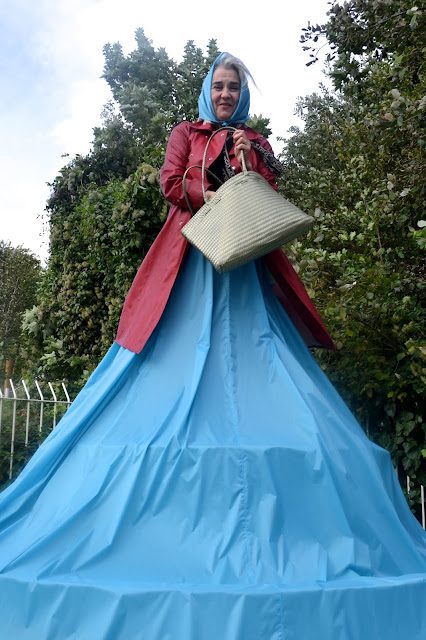 Read all about Difficuλt here.
Posted by Peter Chrisp at 17:50 No comments:

At Trinity Church I Met My Doom


Here's a glimpse of the lost world of Victorian Music Hall. Tom Costello, in 1934, performs 'At Trinity Church I Met My Doom', a song he made famous in 1894.

Joyce gives us his own version of this on p 102 of Finnegans Wake.

Sold him her lease of ninenineninetee,
Tresses undresses so dyedyedaintee,
Goo, the groot gudgeon, gulped it all.
Hoo was the C. O. D.?
Bum!

it's only when you hear the music that you can understand the line 'Attabom, attabom, attabombomboom!' It's the orchestra's sinister accompaniment to the line 'At Trinity church I met my doom'. Listen to it at 1.13 above. 'Bum!' is another note in the song.

The song was written by Fred Gilbert, better known for 'The Man Who Broke the Bank at Monte Carlo', which makes four appearances in the Wake.  Constantine Curran remembered Joyce singing the Monte Carlo song on Sunday evenings in 1903-4 at the Sheehys.

'His acquaintance with the Dublin music-hall and with the repertoire of the entertainers who ran one-man shows was prodigious. I find in letters passing between us in 1937 that his interest in Ashcroft, Wheatley, Val Vousden the elder, Percy French, and their peers was still unquenched, and that I could ransack the music shops for them and the libretti of old Dublin pantomimes without satiating it. This appetite was independent of their special value to him as raw material. His father had a quite exceptional familiarity with all this vernacular undergrowth of song...'

'They passed Dan Lowry's musichall where Marie Kendall, charming soubrette, smiled on them from a poster a dauby smile.
Going down the path of Sycamore street beside the Empire musichall Lenehan showed M'Coy how the whole thing was.'
'Wandering Rocks'

Tom Costello had an outlandish stage costume, seeming to comprise one enormous right buttock, though in the film he says 'No wonder I've got the hump'. You can see it in this print from the V&A.

Looking at him you feel tempted to respond on behalf of his wife: 'You're not much of a catch yourself!'

I found another version of the song in the libretto of the 1894 pantomime of Cinderella at the Theatre Royal Brighton.  Here it's been turned into a duet between Baron and Baroness Hardup. I love the description of the ugly sisters at the end. 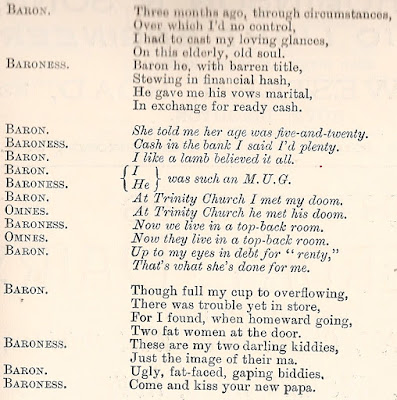 In the Wake, the song marks a shift of subject in the middle of Book One. The opening chapters deal with the fall and disgrace of HCE. On p102, Joyce brings on his wife and defender, Anna Livia Plurabelle, who is also the River Liffey. Hers is the second part of Book One.

Just before the song, we say goodbye to HCE, who is now entombed:

'let him rest, thou wayfarre, and take no gravespoil from him! Neither mar his mound!...But there’s a little lady waiting and her name is A.L.P. And you’ll agree. She must be she. For her holden heirheaps hanging down her back....Then who but Crippled-with-Children would speak up for Dropping-with-Sweat?' 102.20

This is followed by the song, which introduces Anna Livia.

SOLD HIM HER LEASE OF NINININENITEE


Sold him her lease of ninenineninetee,
Tresses undresses so dyedyedaintee,
Goo, the groot gudgeon, gulped it all.
Hoo was the C. O. D.?
Bum!

Her hair, let down, dyed and dainty.  This is Anna Livia's famous 'saffron strumans of hair...that was deepdark and ample like this red bog at sundown.' 203.24.

'First she let her hair fal and down it flussed to her feet its teviots winding coils.' 206.29

Anna's hair was modelled on that of Livia Schmidt (Svevo), which you can see a photograph of in the Museo Sveviano in Trieste.


Joyce told an Italian journalist that Livia Svevo had given both her name and her hair to the heroine of his book:

'They say I have immortalized Svevo, but I've also immortalized the tresses of Signora Svevo. These were long and reddish-blond. My sister who used to see them let down told me about them. The river at Dublin passes dye-houses and so has reddish water. So I have playfully compared these two things in the book I'm writing. A lady in it will have the tresses which are really Signora Svevo's.'

This is quoted by Ellmann, who gives the source as 'a clipping in Signora Livia Svevo's papers'.  So the Dublin dye houses are there in 'dyedyedaintee'.

Has anyone else found a reference to these dye works staining the Liffey red?

Goo, the groot gudgeon, gulped it all.
Hoo was the C.O.D.

That's Joyce's version of this bit of the song:

'Goo' is Anglo-Irish slang for a fool. Gudgeon are fish easy to catch, and so in slang a gudgeon is someone easily duped. C.O.D. is cash on delivery, but cod is also a fish and slang for playing a trick on someone.  HCE is a male fish swimming up the female river, gulping its water/hair and also a great fool easily duped.

In the original song, the lyric goes 'Like to salmon I was speared'.

This allows me to share one of my favourite quotes about the Wake, from Robert H Boyle:

'Fish and fishing, fly-fishing in particular, constitute the major theme in the ''Wake,'' as Joyceans call it. The evidence that I have discovered is so overwhelming that the ''Wake'' must be considered as belonging in great part, albeit a bizarre part, to angling literature.' 'You Spigotty Anglease?' The New York Times


At Island Bridge she met her tide.

Island Bridge is the point where the Liffey becomes tidal. In her final monologue, as she flows out of Dublin, Anna Livia meets the sea at Island Brdge:

The Fin and his Ebba are HCE (Finn MacCool and a fish) and ALP, and there's the ebb and flow of the river. Maybe also suggestions of HCE having diarrhoea (flux) and ALP having sex (a ride).

Apart from matching the rhythm of the song, Joyce here is paying tribute to Ebba Atterbom, who translated A Portrait into Swedish in 1921.  Her Swedish wikipedia article quotes Joyce's song.


According to Bodils' blog, Joyce and Atterbom exchanged several letters, in which he pretended to misunderstand her first name and called her Edda, after the old Norse poems.

We’re all up to the years in hues and cribies.
That’s what she’s done for wee!
Woe!

We're up to our ears/ the years in hue and cries - the mob chasing HCE – and cry babies in cribs - ALP's 111 children.

I'd love to read any other interpretations of this song.

The chapter over, we turn the page and find the Anna Livia section beginning with this lovely invocation:

'In the name of Annah the Allmaziful, the Everliving, the Bringer of Plurabilities, haloed be her eve, her singtime sung, her rill be run, unhemmed as it is uneven!'  104.01
We get the song again elsewhere in the Wake.
'A Trinity judge will crux your boom. Pat is the man for thy.' 326.04
'at Kennedy's kiln she kned her dough, back of her bake for me, buns!' 498.19
'in trinity huts they met my dame, pick of their poke for me' 548.12

Posted by Peter Chrisp at 17:09 No comments: