The Joyce Trail in Trieste. Part 1

'La nostra bella Trieste!...I long to see the lights twinkling along the riva as the train passes Miramar. After all, Nora, it is the city which has sheltered us.'


Like Joyce, we came into Trieste by train, a beautiful route with views of the Adriatic, and a glimpse of Archduke Maximiian's white castle, Miramare, as the first sign that you're approaching the city.

When they first arrived here in October 1904, Joyce left Nora sitting on a bench outside the station while he went to look for a room.  He then managed to get himself arrested along with a group of drunk English sailors in a bar. Nora, who had no money and didn't speak a word of Italian, was left alone on her bench for several hours until Joyce was finally released. 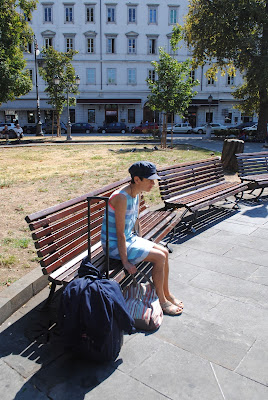 Trieste has a choice of two Joycean hotels to stay in, the Hotel James Joyce and the Hotel Victoria, which includes the actual apartment he lived in from 1910-12. We picked the Victoria, but stayed in their self-catering block next door. 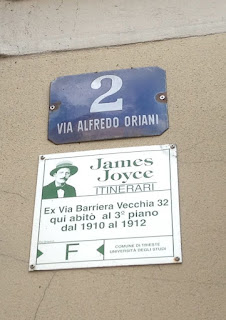 There's a plaque by the door, which is part of a Joyce trail you can follow around the city. It includes not just all Joyce's addresses, but those of some of his students, the schools he taught at, his favourite bars, theatres, a cinema, a pastry shop and even a brothel.  It's based on a wonderful book, James Joyce: Triestine Itineraries, by Renzo Crivelli and the Joyce Laboratory of Trieste. Yes, the University of Trieste has a Joyce laboratory!  You can download a map of the trail from the Joyce-Svevo Museum website. 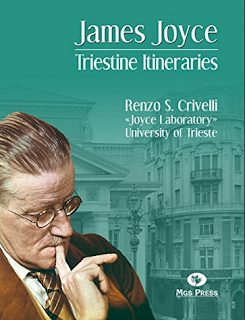 I bought the kindle version, since the book, which is bilingual, is quite heavy.

When Joyce lived in the Victoria Hotel building, his landlord was the pharmacist, Giovanni Picciola, whose business is still there. When I mentioned this on twitter, the James Joyce Gazette wittily commented, 'Chemists rarely move.' (Bloom's thoughts on Sweny's in Dublin: 'Chemists rarely move. Their green and gold beaconjars too heavy to stir.') 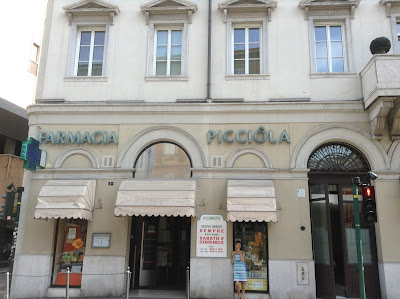 Joyce had some colourful things to say about Picciola when faced with eviction in 1912.  Here's his letter to Stanislaus. 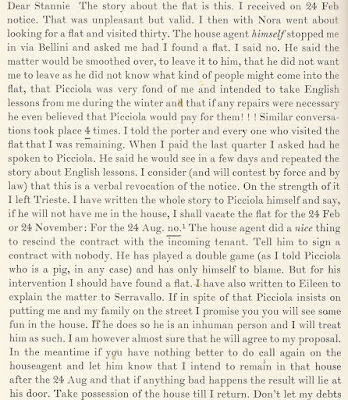 I called in at the chemist to buy some reading glasses. 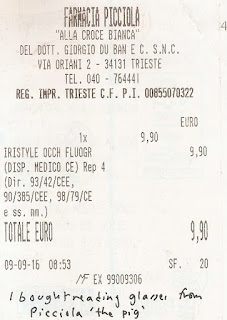 The Victoria offers a luxury 'James Joyce suite'. I asked the desk staff if this was the room the Joyces lived in. They said it wasn't and that the Joyce apartment was too small and dark to be converted into accommodation.


The suite has quotations from Joyce, in Italian, on the furniture. Here's a photo, from their website. Sadly, the quotes don't include 'Picciola is a pig'. 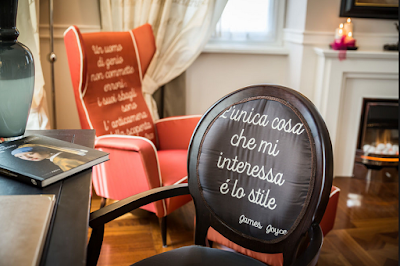 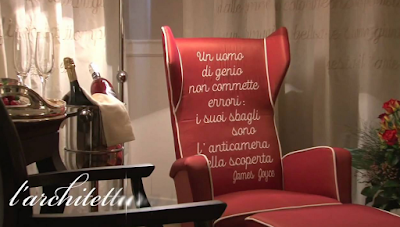 The armchair carries the famous quotation from Stephen Dedalus in Ulysses: 'A man of genius makes no mistakes; his errors are volitional and are the portals of discovery.' That's something that Nora and Stanislaus could have flung in Joyce's face so many times in the Trieste years (e.g. after being evicted by Picciola): 'Is this another of your portals of discovery, then?' 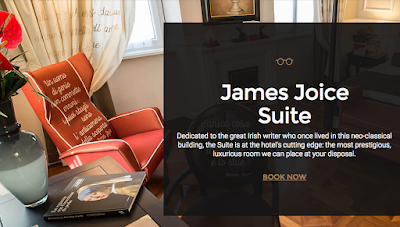 Posted by Peter Chrisp at 12:52 No comments:

A Photo of Anna Livia's Hair

'First she let her hair fal and down it flussed to her feet its teviots winding coils'  206.29

I've just got back from a fortnight's holiday, on the trail of Joyce, in Trieste and Pula. In the excellent Joyce-Svevo Museum, I was amazed to see this photograph of Livia Svevo, which the Museum has kindly given me permission to reproduce here.

Livia Svevo was the wife of Joyce's language pupil, fellow novelist and good friend, Italo Svevo (Ettore Schmitz). Joyce told an Italian journalist that Livia had given both her name and her long reddish-blonde hair to the heroine of Finnegans Wake:

'They say I have immortalized Svevo, but I've also immortalized the tresses of Signora Svevo. These were long and reddish-blond. My sister who used to see them let down told me about them. The river at Dublin passes dye-houses and so has reddish water. So I have playfully compared these two things in the book I'm writing. A lady in it will have the tresses which are really Signora Svevo's.'

This is quoted by Ellmann, who gives the source as 'a clipping in Signora Livia Svevo's papers'. Joyce's sister, Eileen, saw Livia's hair let down because she was employed as a governess to her daughter.


On 20 February 1924, Joyce wrote to tell Svevo that he had borrowed his wife's name and hair:

'A propos of names, I have given the name of Signora Schmitz to the protagonist of the book I am writing. Ask her however not to take up arms, either of steel or fire, since the person involved is the Pyrrha of Ireland (or rather of Dublin) whose hair is the river beside which (her name is Anna Liffey) the seventh city of Christendom springs up, the other six being Basovizza, Clapham Junction, Rena Vecia, Limehouse, S.Odorico in the vale of Tears and San Giacomo in Monte di Pietå. Reassure your wife with regard to Anna Livia. I have taken no more than her hair from her and even that only on loan, to adorn the rivulet which runs through my city, the Anna Liffey, which would be the longest river in the world if it weren't for the canal which comes from far away to wed the divine Antonio Taumaturgo, and then changing its mind goes back the way it came. '

Here he's talking about the little canal in Trieste, which flows up to the church of St Antony the Miracle Worker. If you go to see the canal, you'll find this statue of Joyce walking across the bridge over it. His shoulders have been brightly polished by all the hands of tourists posing for pictures. 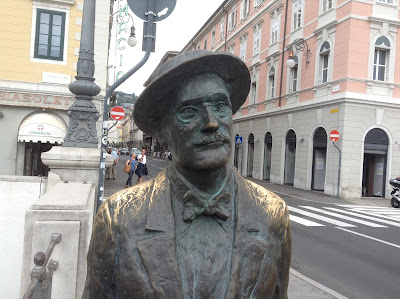 When Ellmann interviewed Livia Svevo for his biography, she told him that when she 'heard that Joyce in Finnegans Wake was using her flowing hair as a symbol of the lovely river Liffey, she was flattered, but when she heard that in the river there were two washerwomen scrubbing dirty linen, she was disgusted.'

She seems to have been a bit of a snob. John McCourt writes, 'More than Schmitz she attached importance to class, and more than once she ignored Nora on the street even though they had known one another from the time Nora had, in desperation, taken in washing and ironing for her.'

Did Joyce get the idea for his washerwomen from Nora acting as one to Livia?

Svevo was so pleased to have his wife's hair included in the book that he sent Joyce a portrait of her, with her hair down, painted by his friend Umberto Veruda. According to Nino Frank, Joyce attached as much importance to this portrait as he did to the one of his father by Patrick Tuohy.

Joyce was still thinking about Livia Svevo and her hair as he finally finished the book. On New Year's Day 1939, he wrote to her:

'Dear Signora, I have at last finished my book. For three lustra I have been combing and recombing the hair of Anna Livia. It is now time that she appear on the stage.'

A lustrum was a five-year period in Ancient Rome, so three lustra = 15 years.

Livia's hair is described by the washerwomen in the Anna Livia episode, on page 203:

'he plunged both of his newly anointed hands, the core of his cushlas, in her singimari saffron strumans of hair, parting them and soothing her and mingling it, that was deepdark and ample like this red bog at sundown.'

Posted by Peter Chrisp at 16:58 No comments: