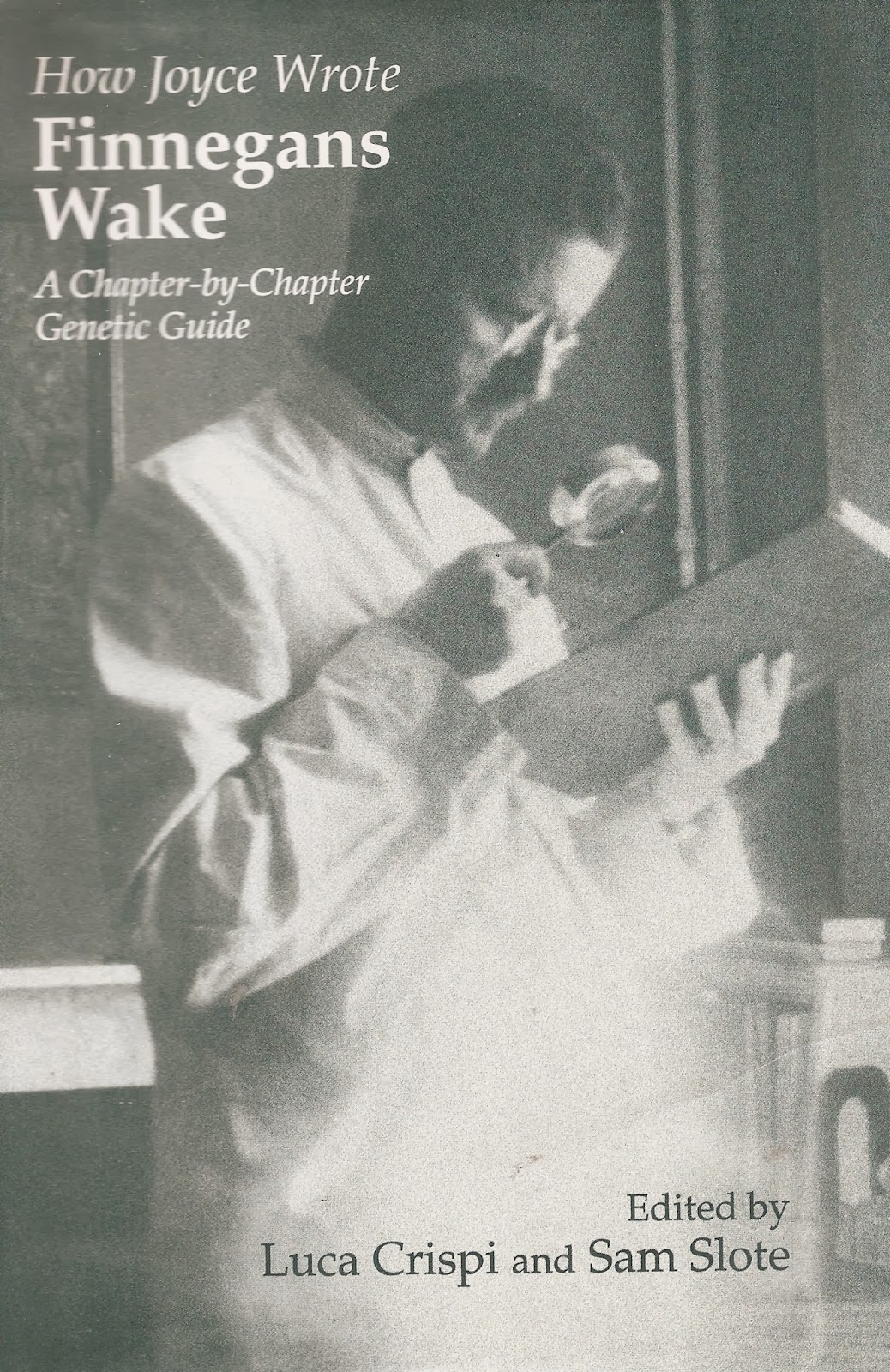 Genetic criticism is the study, through manuscripts and proofs etc, of the processes of literary creation. It sounds like a dry technical academic discipline. But there's nothing dry or dull about the Genetic Wakeans. Over at the online Genetic Joyce Studies, you'll find the most entertaining and passionate people writing about Finnegans Wake. Many of them have also contributed to this wonderful collection of essays, How Joyce wrote Finnegans Wake: A Chapter-by-Chapter Genetic Guide.

'look at this prepronominal funferal, engraved and retouched and edgewiped and pudden-padded very like a whale’s egg farced with pemmican as were it sentenced to be nuzzled over a full trillion times for ever and a night till his noddle sink or swim by that ideal reader suffering from an ideal insomnia...' 120.09-14

Joyce preserved every scrap of paper involved in its creation, and you can find them in four major archives. He sent most of his manuscripts and proofs to his patron, Harriet Shaw Weaver, who donated them to the British Library.

Joyce's working notebooks and remaining manuscripts and proofs, abandoned in Paris at the outbreak of the war, were rescued by his heroic assistant, Paul Léon. In 1950, the notebooks were acquired by the State University of New York at Buffalo, and so they're known as the 'Buffalo Notebooks.' 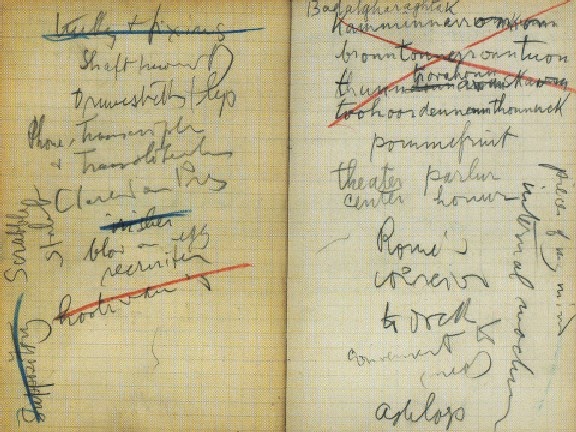 Here's a typical page from a Buffalo notebook, from Hypermedia Joyce Studies.

At the top right, you can see Joyce inventing his first hundred-letter thunderword, which appears on the book's opening page. He's crossed the entry out, which he would do whenever he used a notebook entry in a manuscript.

The Buffalo and British Museum materials were first made widely available with the 1978 publication of The James Joyce Archive, which gave a big boost to genetic studies. 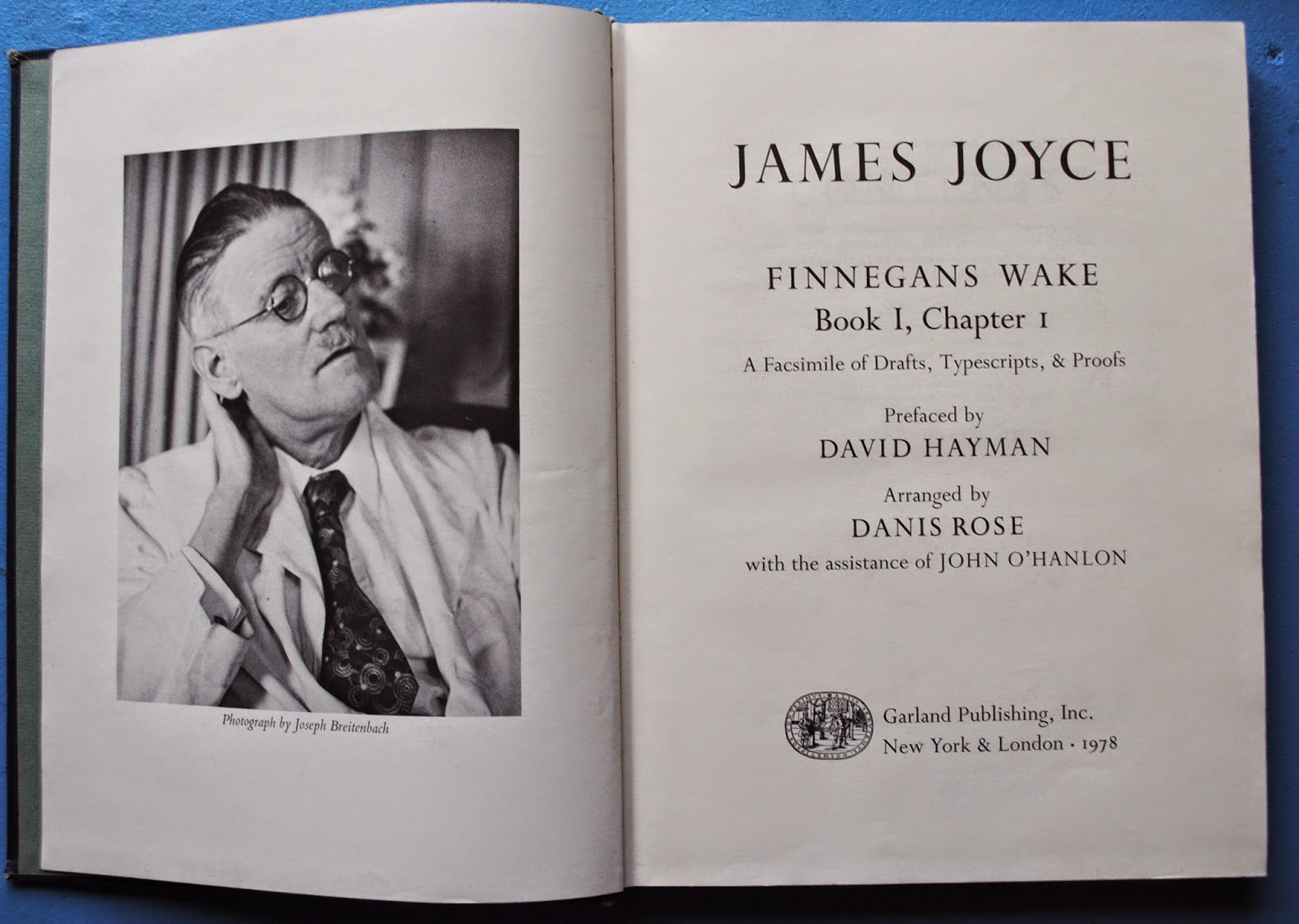 A third set of manuscripts was acquired by the National Library of Ireland in Dublin, which has been making them available online (though not in the UK, where you'll just see 'This content is not available in your location'). The fourth big archive is in the University of Tulsa, which has the final proofs for the book. These were only recently discovered there. Robert-Jan Henkes and Erik Bindervoet, the Dutch translators of Finnegans Wake, have written a lovely piece describing their excitement at the discovery of the Tulsa proofs (by Luca Crispi, who they describe as 'the Columbus of Joyce studies'):

'- Hey, the 'lost last proofs' have been found! There are 1500 pages of unexplored Finnegans Wake-materials in Tulsa!....the Tulsey Town Treasure Trove has yielded the very very last page proofs of Finnegans Wake, from late 1938 and early 1939, mere months before the novel hit the bookshops with a thunderclap (4 May 1939).
- All right! Right on!
- This makes Tulsa the fourth biggest Joyce-repository in the world and in the universe.
- What's in it then? Should we go there to see for ourselves?
- Of course!'


Henkes and Bindervoet went on to visit the Tulsa archive, where they were thrilled to mix their 'fingerprints with those of James Joyce, thereby absorbing some molecules from his genepool.'


'Has anybody had the courage to ask J.how many misprints are in it?'

Joyce passes on the pained reaction of friends and editors to his new work to Harriet Shaw Weaver, 11 November 1925

A central genetic activity is fixing the book's thousands of misprints, and restoring text lost during the complex transmission process.  At Genetic Joyce Studies, Dirk van Hulle has listed many of the textual disappearances in the Wake's progress. A telling example is the word 'lost' in the book's last line, which originally read 'A way a lone a lost a last a loved a long the'

Here are the excitable Henkes and Bindervoet again, describing how it feels to a Genetic Wakean to see such mistakes creeping into Joyce's text: 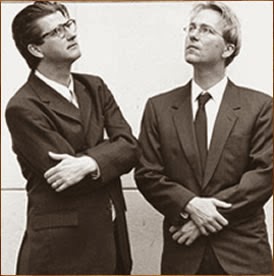 ' Through Joyce's accretive way of writing we could see the book take shape under his very pen....We saw words busy being born and busy dying. We saw sentences grow from mere words to more pages. We saw syntaxes swell until, by an unsolicited intervention from outside, they burst. We saw the precise intention of Joyce go to waste because of accidental sabotage by typists and printers. Many times we wanted to cry out: Take care, Joyce! Watch out! Something's going wrong there! Keep your hands on the wheel, for chrissake! Look in your rear mirror! Over there! You're losing something! O my God, this can't be really happening! An entire sentence off the road! An entire paragraph into the gulley! But the car scribbledehobbled rambling on, through puddles and potholes, rainshowers and hailstorms of criticism and ignorance, and one after the other essential car parts fell off to remain behind on the rocky rough country road from Dublin. We saw cristalclear phrases being ruined and disjointed by an accidental loss of punctuation marks, letters, words and sometimes whole lines. We saw Joyce make the most of typographical errors by concocting something new out of the muddle. We saw how he desperately tried to correct accidental mistakes, but more often than not we saw how he had to admit defeat and lay down his arms in the face of the inevitable inky, murky sea of mistakes his typists and printers made, and by neglecting them, continue them. In short, we were biting our nails in sorrow and impotent rage, howling at the moon of the inevitable course of history.'


Before translating the book into Dutch, Henkes and Bindervoet created their own corrected text.  You can read their list of corrections as an appendix to their 2012 Oxford World's Classics edition of Finnegans Wake. Their changes are often different to Danis Rose and John O'Hanlon's Corrected Text. You can now make up your own mind how to correct the Wake, thanks to Rose and O'Hanlon's James Joyce Digital Archive, which includes every draft level.

Finnegans Wake is a patchwork of quotations from books and newspapers, which Joyce recorded in the Buffalo notebooks. Genetic Wakeans like to track these down, an activity which can become addictive.

'I locked myself up, I neglected my family, shirked my duties and generally wasn’t able to think about anything else but finding new sources. This lasted a full month, before I could tear myself away, little by little, from the World of Wakecraft, but after two months I still have to have my daily dose of source hunting. So beware. You may try this at home, but at your own peril.'

'I spent far too much time ploughing through several months' worth of Irish Times newspapers, reading every single line of every single newspaper. The waste of more than several hundred hours was made up by finding out exactly who Frisky Shorty was (FW. 039.18 et passim; he was a good friend of Boston Slim)'

(Frisky Shorty is one of the gossip-mongers who spreads rumours about HCE. Joyce discovered the name in an article about 'Literary Vagabonds' ' He [the author W.H. Davies] varied the monopoly of tramping by stealing free rides on freight trains with kindred knights of the road known as "Boston Slim" and "Frisky Shorty."") 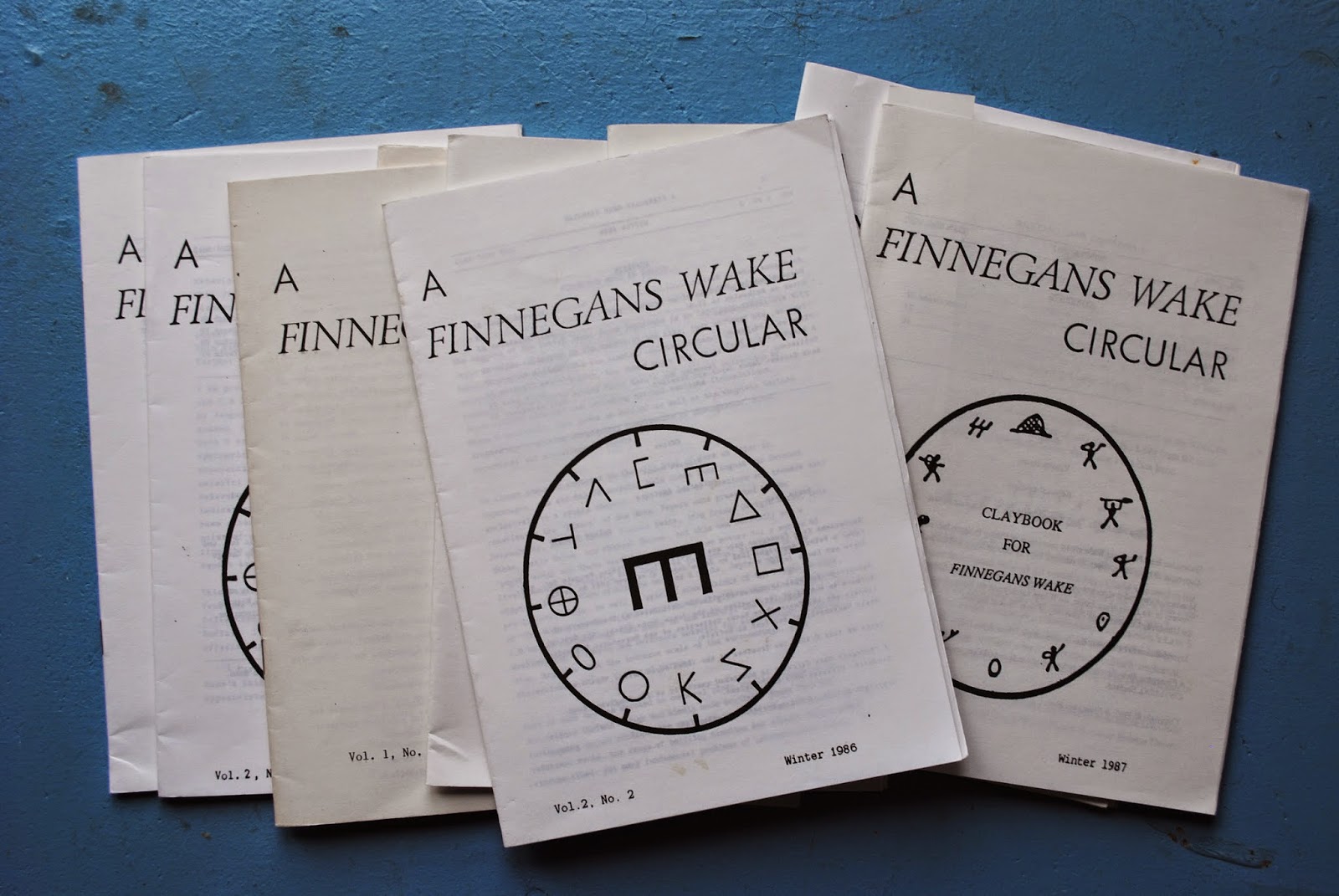 The Dubliner Vincent Deane is one of the best genetic detectives. I first came across him in 1985, when he began to bring out the Finnegans Wake Circular - the first journal devoted to notebook studies.

It was Deane who tracked down Joyce's extensive use of the Thompson and Bywaters murder case and the source of the Festy King trial in 1923 court reports in the Connacht Tribune.

Robbert-Jan Henkes is another great source hunter, and he's written a series of witty and playful articles, reconstructing Joyce's reading from his notebooks. He often uses fictional techniques to bring to life Joyce's reading ('With his less bad right eye close to the book, Joyce starts reading about marriage customs in the region around Tréguier...'). 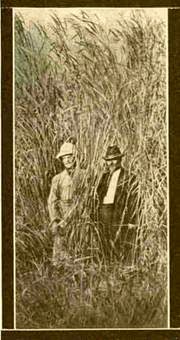 One of Henkes' best is his 2008 'James Joyce in Africa: An Expedition to the Sources of the Wake', which describes a 'word safari' the writer took in 1924:

'In March and May 1924, while drafting the first version of Shaun...Joyce took two short word-hunting trips to Africa. Until recently, little was known about these missions, although there were some telltale hints in Joyce’s travel notebooks. But now the sources of these travel notes have been discovered. Both African expeditions were tracing the footprints of the Scottish-born missionary Dan Crawford (1870-1926).'

Henkes presents this 'word safari', taken by Joyce in Paris, as if it was a real trip to Africa, and even includes this picture, captioned 'Joyce (left) meets Crawford in the long grass (photograph by P.B. Last).'

Henkes also gives us this map, captioned 'James Joyce’s itineraries in the basin of the Upper Congo, March (blue, from Elisabethville to Lake Mweru and then to, but not reaching Ilala) and May (red, from Chisamba to Lake Mweru) 1924'


PQ has written about this article in his excellent blog.

Henkes' latest piece includes a brilliant investigation into the sources of Joyce's treatment of old age, the Mamalujo episode, where he shows how Joyce created the rambling senile style of that chapter:


'As soon as Joyce had invented his Old Men...he quickly decided he needed to make them as demented as possible, and he started studying old age and its effects in some depth by delving into serious medical literature. This literature, in turn, supplied him with ideas of what the Old Men should actually be doing in their state of dementia.' 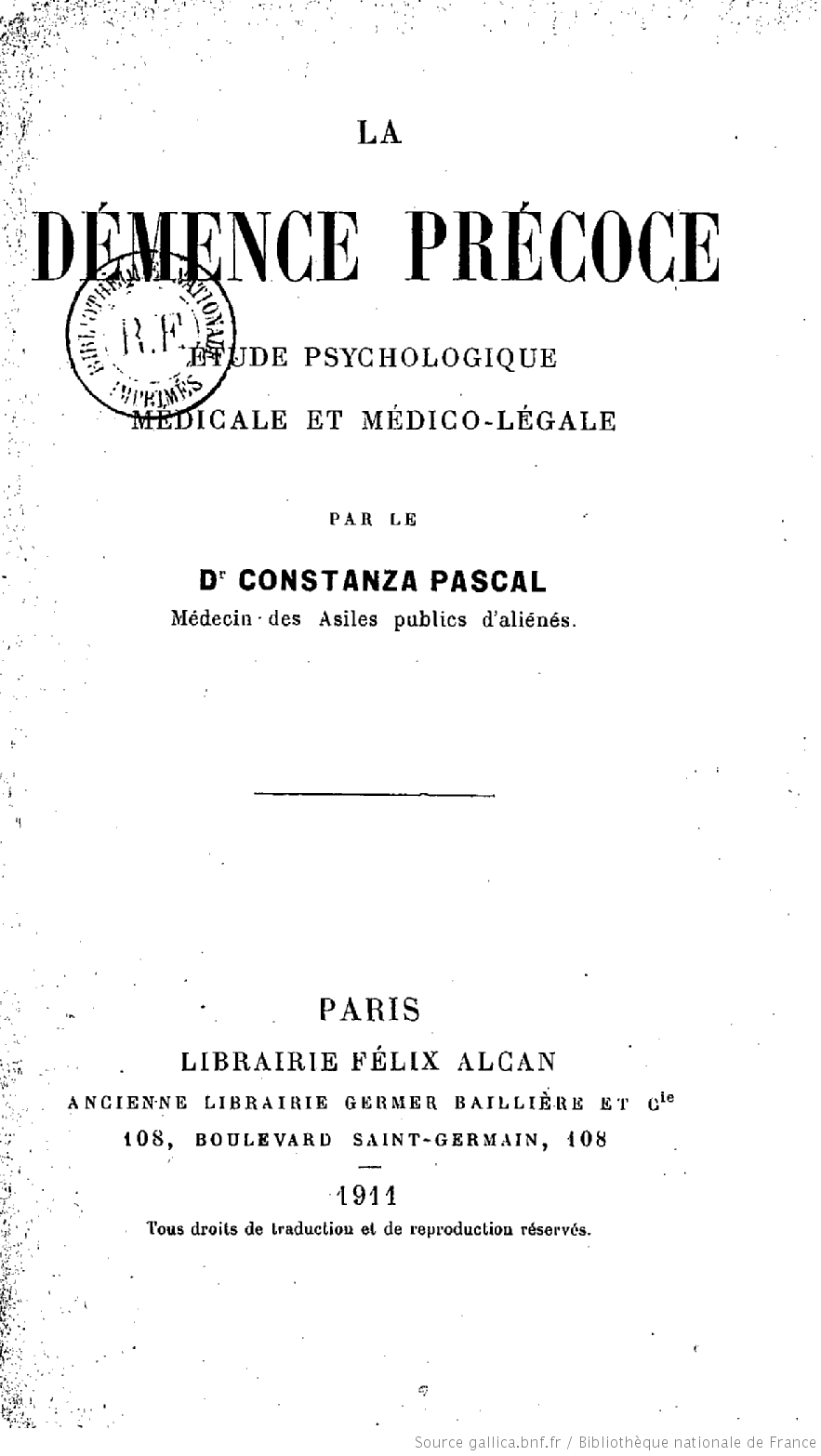 Henkes has identified Dr Costanza Pascal's La Démence Précoce (left) as a major source. She was a doctor in a clinic who recorded many of the symptoms of patients suffering from dementia. For example, she writes:

'They don’t get into their beds anymore, sleep on the blanket, under their bed, or under those of other people.’

This inspired the anarchically demented behaviour, and the shared bed, of the four old men in Joyce's episode:

'when they were in dreams of yore, standing behind the door, or leaning out of the chair, or kneeling under the sofacover and setting on the souptureen, getting into their way something barbarous, changing the one wet underdown convibrational bed or they used to slumper under...'

Another symptom of dementia described is the breakdown of language, as 'syntactical links (‘but’, ‘by’, ‘if’, etc.) are randomly placed and unite disparate sentences. [...] Nouns, adjectives, verbs are often the casualties of the language of these patients; conjunctions, prepositions grow less numerous. [...] Finally, nouns, adjectives, etc., eventually fade and disappear. Neologisms of dementia, which represent the last stage of erasing images, are constructed with the remains of all these elements.'

Henkes shows how Joyce used these ideas in creating the senile style of Mamalujo, deliberately mislaying prepositions and conjunctions. To create 'neologisms of dementia', he went through the text erasing letters, so that, for example, 'beautiful' at top left, became 'beaufu'.

In the same text, Henkes found Dr Costanza criticising another psychologist for presupposing 'an ideal human being with an ideal disease.'

Joyce recorded this in his notebook as  ‘ideal man suffering from an ideal disease’, which Henkes describes as  'an early version of his famous vision of the only possible public of Finnegans Wake, ‘that ideal reader suffering from an ideal insomnia,’ (FW 120.13-14) – a motto that can be engraved on the tombstone of many a genetic Wakean, dead or alive.'

WHY AREN'T THEY CELEBRITIES?

These genetic Wakeans deserve to be more widely known and read!  To conclude, here's a quotation from another top geneticist, Jed Deppman:


'In a recurring dream, I wake up and genetic studies are no longer the sole province of academics. The whole world has embraced them: there are bestsellers, websites, talk shows, even professional teams...with mascots, fans, competitions, cheerleaders, and action figures....But then I wake up, and as Emily Dickinson (the last person I see in my dream) puts it: "The nearest dream recedes unrealized." Nobody in my family or college community has ever heard of genetic criticism or shows the slightest interest, and everyone encourages me politely but curtly to do something else.'