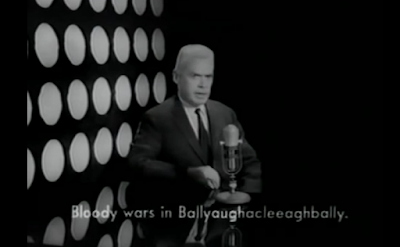 Here's a scene from Mary Ellen Bute's wonderful film 'Passages from James Joyce's Finnegans Wake', which you can see on youtube and ubuweb.  Bute needed to find ways of visualising Joyce's text, and one of them was to re-invent the Wake narrator as a television newsreader. It might seem that she's taking liberties here, but television is in Joyce's book. 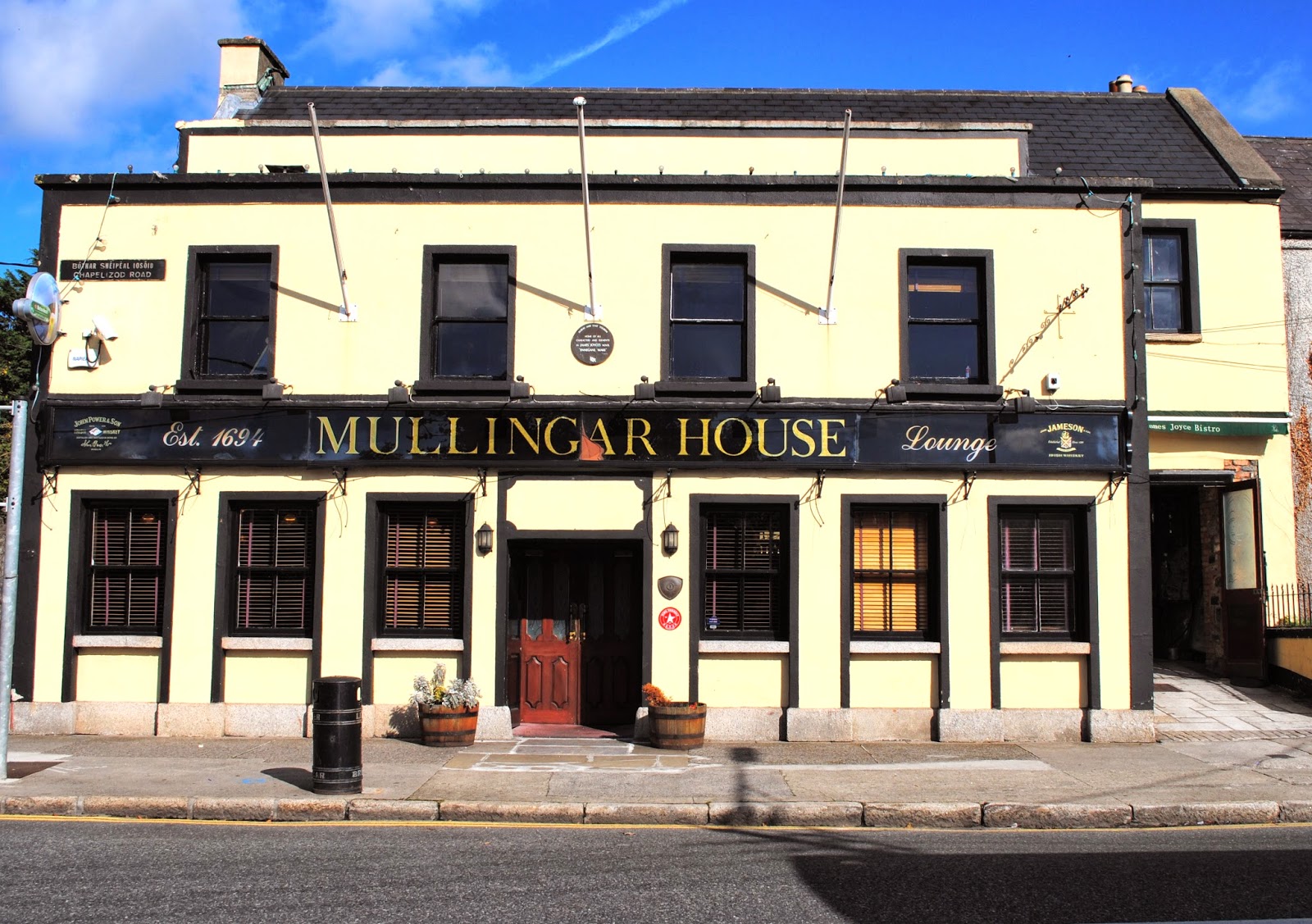 The 'Stories' chapter (p309-82) is set in a pub, based on the Mullingar House in Chapelizod, which I visited in 2013 and which has this plaque on the wall.


The extraordinary thing about the Wake pub is that it has a television set!

If you travelled back to the Mullingar House in 1937-8, when the chapter was written, and told Mr Keenan, the landlord, that one day his pub would have a television, he would surely have dismissed the idea as science fiction. But I can confirm that it really now does have television – three sets, showing sporting events. Finnegans Wake has the power to predict the future!

Robert Anton Wilson from an interview transcribed by Scott McKinney and published in 2012 on the OnlyMaybe blog.


Here's the key passage, which Joyce wrote in December 1937. The pub drinkers have been listening to a double act, Butt and Taff, who are trying to tell the Crimean War story of 'How Buckley Shot the Russian General.' On page 349, the characters appear on the pub television screen, with Taff fading (becoming Tuff) and Butt emerging (becoming Batt). They are then replaced on the screen by the figure of the Russian General, a version of HCE: 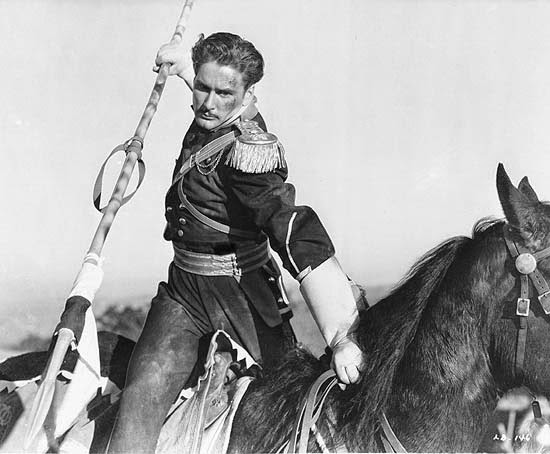 This is an astonishing account of the working of television, merged with the Crimean War.  'Charge of a light barricade' combines beams of light firing at the 'bombardment screen' with the Light Brigade charging the Russian guns at Balaclava.  You can imagine how Joyce's imagination took off at the name 'Light Brigade'!

Here's Erroll Flynn in the 1936 film, 'Charge of the Light Brigade'. If you've ever seen this on television, you will have experienced both the beams of light and the charging cavalrymen simultaneously. I wonder if Joyce saw this film, released just two years before his own Crimean War treatment.

There's also a religious dimension to Joyce's text, suggested by the word 'iconoscope', a technical television term, from the Greek eikon (image) and skopon (to watch). The General's appearance on the screen is like that of a Saint from an Icon, or a Spectre - 'idolon' is from the Greek eidolon - spectre - which also gives us 'idol' . This all suggests the miraculous impact of early television. 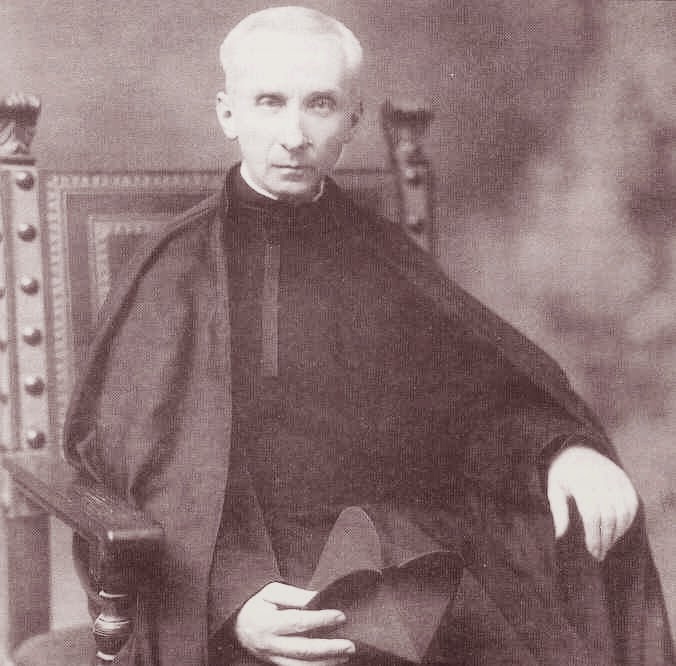 To Joyce, with his Jesuit education, 'General' would recall the Superior General of the Society of Jesus, nicknamed the 'Black Pope'.  Between 1915 and 1942, this was Wlodimir Ledóchowski (right).

So Joyce calls his General 'Popey O’Donoshough, the jesuneral of the russuates', and describes him wearing various religious seals.

'Bairdboard' is named after John Logie Baird, who transmitted the first television images in 1925.  This is the first known photograph of a moving image produced by Baird's 'televisor', in around 1926. It shows his business partner Oliver Hutchinson. 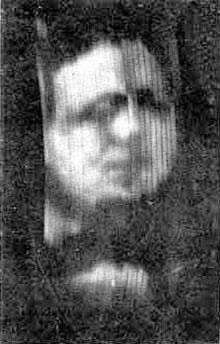 This is how I picture Joyce's Russian General emerging, like a spectre, on the screen of the Mullingar House television.

Joyce, who opened Ireland's first cinema in 1909, followed the development of television almost from the beginning. The Wake has two television references which were both published in transition in 1927. Are these the earliest mentions of television in literature?:

'Television kills telephony in brothers' broil. Our eyes demand their turn. Let them be seen!' 52.18

Television will replace the telephone, for our eyes demand their turn, after our ears.

The fact that television needed 'betterment' is commented on in the second reference:

'looking through at these accidents with the faroscope of television, (this nightlife instrument needs still some subtractional betterment in the readjustment of the more refrangible angles to the squeals of his hypothesis on the outer tin sides)' 150.32-5

I think one reason that Joyce was interested in television was that it was a new technology which required new words. 'Television' itself combines the Greek 'tēle' (far) and the Latin 'visio' (seeing). It's almost a Wake word!  According to the OED, the word goes back to 1900, when The Century Magazine, imagining the future, declared 'Through television and telephone we shall see and hear each other as though face to face.'

In the passage above, Joyce has come up with his own alternative, 'faroscope', meaning 'far seer' (Greek 'skopon' again). It also has the special Wake echo of the 'fire escape' in Medina Place, Hove, used by Charles Stewart Parnell to escape from being caught with Kitty O'Shea (cf 'a skyerscape' 4.36; 'fuyerescaper! 228.29; 'fairescapading in his natsirt' 388.03). There's also 'Pharos', the Greek lighthouse.

Imagine if the television pioneers had been Joyce fans. Along with the physicists' 'quark', adopted from Finnegans Wake by Murray Gell-Man, we might today talk about what we saw last night on our faroscopes rather than our televisions.

The 1930s saw big leaps forward, with electronic television improving on Baird's mechanical system. This was the work of many inventors, but the most important was probably Vladimir Zworykin, who invented and named the iconoscope, the first practical television camera tube.

An iconoscope focussed an image through a camera lens on a  'mosaic screen', a mica plate, covered with vast numbers of tiny silver cells, made photo-sensitive by being coated with caesium (Joyce's 'caeseine coatings'). Each cell on the screen built up an electrical charge, whose strength depended on how much light it received. This complete image, or teleframe, was then scanned by a stream of electrons, which traversed the mosaic screen in a series of slightly sloped parallel lines. So Joyce gives us:

Again, there's the Battle of Balaclava here, as the Russian gunners traverse the British lines. 'sunksundered' is an echo of 'rode the six hundred', from Tennyson's 'Charge of the Light Brigade'. 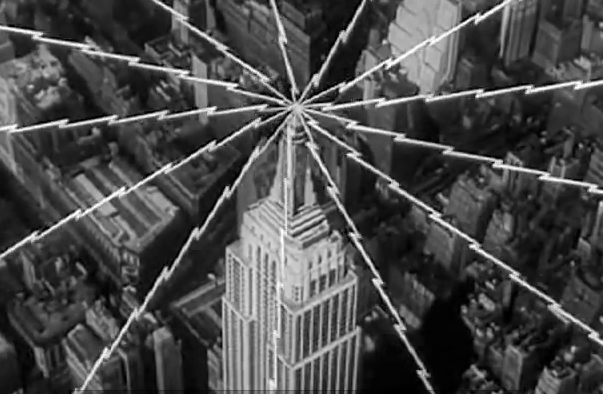 The image captured on the mosaic screen, in the form of a stream of electical impulses, was then converted into a radio carrier wave for transmission - 'borne by their carnier walve'

These signals were then picked up by radio receivers - tv aerials -and converted back into an electrical current, which was then amplified and used to create the image on the television screen.

Synchronizing pulses added to the signal at the end of every scan line and teleframe ensured that the receiver remained locked in step with the transmitted signal ('Down the photoslope in syncopanc pulses'). To convert the electrical current back into the original image ('its viseversion'), televisions used the Cathode Ray Tube, also named by Zworykin. This was a vacuum tube containing an electron or spray gun, which bombarded a flourescent screen with a narrow beam of electrons ('Spraygun rakes and splits them'). This caused the screen to glow, recreating the original teleframe. 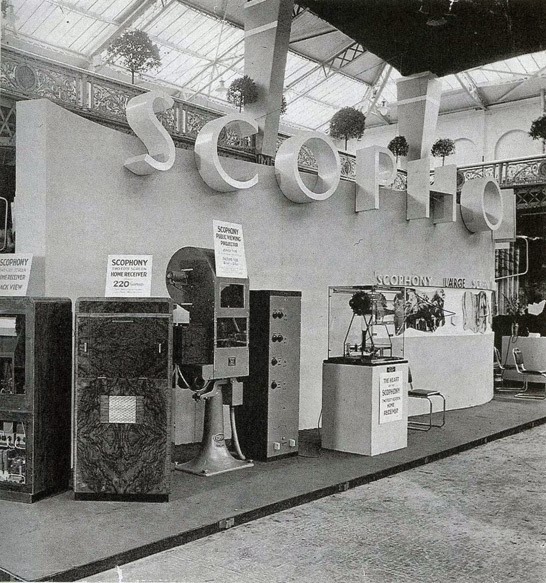 1937, when Joyce was writing this, was a big year for television. It was the year that the British Scophony System was deleoped.  This was like an early form of home cinema. Here's how Peter Yanczer describes it at his Early Televsion Museum:

'Without a doubt, the Scophony systems provided the highest performance ever achieved with mechanical scanners. In 1938, Scophony showed and successfully demonstrated three types of 405 line mechanical television receivers at the annual Radiolympia show in England. One was a home receiver, in a cabinet that produced a picture approximately 24" by 22". The other two were of similar construction, but without cabinets, intended for theater type operation. One produced a 6 by 5 foot picture and the other, 9 by 12 feet. Several of the theater models were installed and operating successfully. None of these receivers were sold because their production was halted due to the oncoming war in Europe. The Scophony system consisted of several unique innovative devices working together. It used a new "split focus" optical system coupled to a "Jeffree Cell," light modulator and special high speed synchronous motors to drive the scanners. Each were important fundamental Scophony inventions, developed by them for their mechanical scanning systems.'

The system used supersonic light control, shown above, and explained on this web page by Chris Long of Australia

Its effect was to split the focus of the light ('splits them from a double focus').

Joyce describes this system in another part of Finnegans Wake, written in May 1938:

'(his dectroscophonious photosensition under suprasonic light control may be logged for by our none too distant futures as soon astone values can be turned out from Chromophilomos, Limited at a millicentime the microamp)' 123.12-15

It looks as if the television in the pub episode is also a Scophony one, because at one point, somebody exclaims: 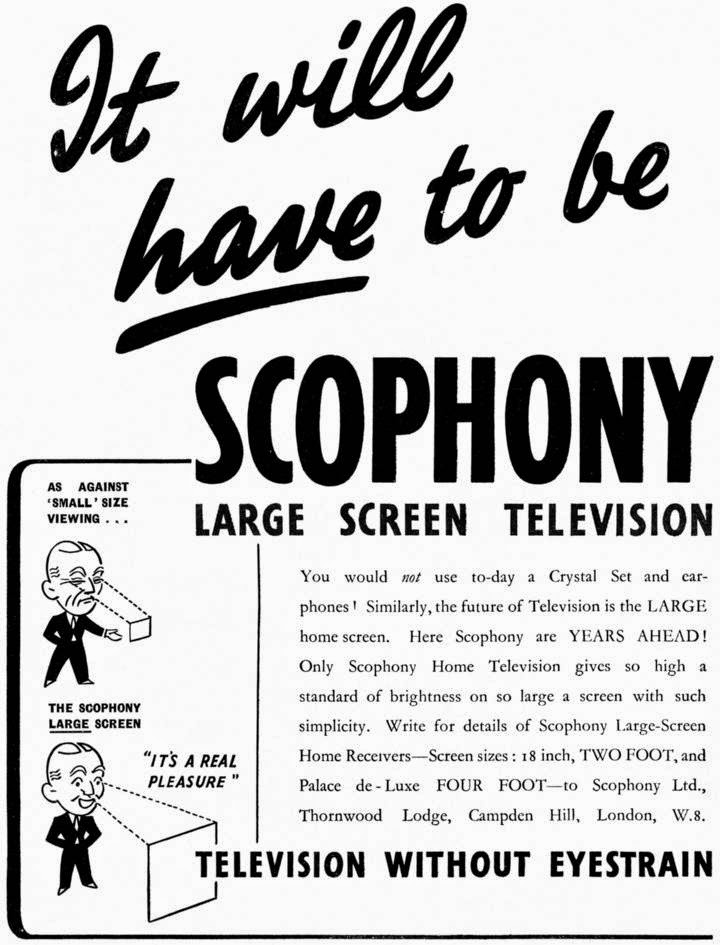 A lot of the information above comes from Danis Rose, who transcribed Joyce's notes on television in his Index Manuscript, published by the Wake Newslitter Press in 1978. The Index Manuscript is a transcription of one of Joyce's last working notebooks, known as VI.B.46. You can also read Rose's explanations of television in the James Joyce Digital Archive.

Here are Joyce's notes, with page and line numbers added by Rose, showing where each item appears in the Wake.  The letters 'G' and 'S' refer to the green and sienna coloured crayons which Joyce used to cross out each entry when he transferred it to his text. 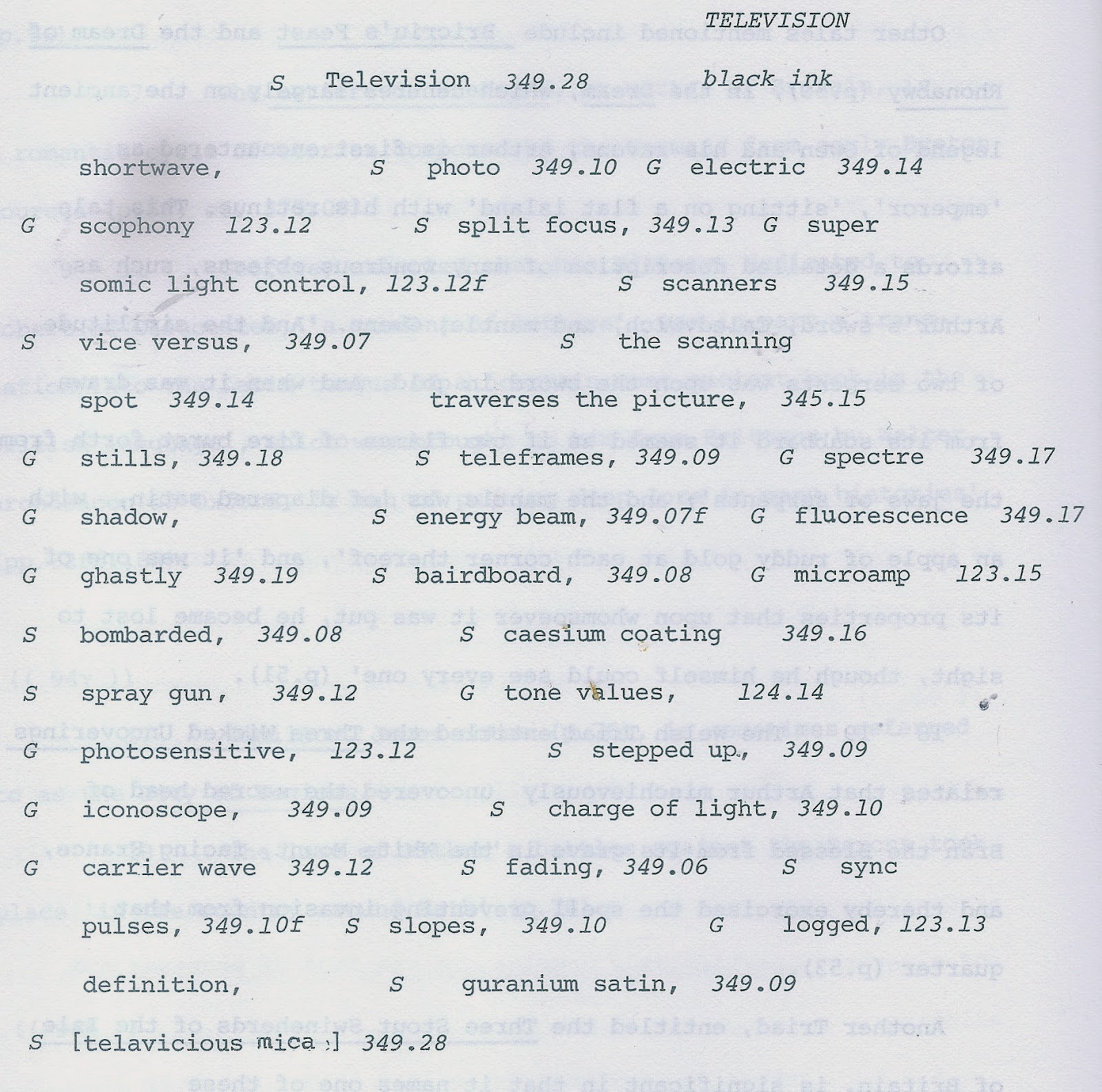 Nobody has yet identified the source of Joyce's notes. Most of the words would be commonly used in newspaper accounts of television, which makes identification difficult.  The best clue is the obscure phrase 'guranium satin'. Rose writes of this, 'I have been unable to find a reference to the singular material, guranium satin, with which Joyce constructs his bairdboard screen.'

Another unusual entry for an account of television is the word 'ghastly' which inspired Joyce's description of the Russian General as 'the wholly ghast' 349.19

Tracking down Joyce's source is a job for the Genetic Wakeans!