'He disliked football but liked cricket, and though too young to be in the junior eleven, he promised to be a useful bat. He still took an eager interest in the game when he was at Belvedere, and eagerly studied the feats of Ranji and Fry, Trumper and Spofforth. I remember having to bowl for him for perhaps an hour in our back garden in Richmond Street. I did so out of pure goodness of heart since, for my part, I loathed the silly, tedious, inconclusive game, and would not walk across the road to see a match.'
Stanislaus Joyce, My Brother's Keeper

Yes, James Joyce wasn't only a rugby fan, he was also a cricket lover!  He inherited his love of the game from his father, and learned to play at Clongowes Wood, the exclusive boarding school he attended from 1888-91. This was right at the beginning of the Golden Age of Cricket, dominated by larger than life characters like Ranji, the cricketing maharaja and C.B.Fry, who supposedly turned down the throne of Albania and whose party trick was to leap backwards from a stationary position onto a mantelpiece (Fry was still doing this in his 70s).  Fry and Ranji both played for my home county, Sussex, and we have their names on the front of Brighton buses.  Joyce's other heroes named here were Victor Trumper, the great Australian batsman, and Fred 'The Demon' Spofforth, the fast bowler whose 1882 demolition of England at the Oval led to the Ashes.

Cricket was played at Clongowes from Easter to mid June, and then for three weeks in September. The sounds of the game form a repeated leitmotif, reverberating through the Clongowes Wood episode of A Portrait:

'But there was no play on the football grounds for cricket was coming....And all over the playgrounds they were playing rounders and bowling twisters and lobs. And from here and from there came the sounds of the cricket bats through the soft grey air. They said: pick, pack, pock, puck: little drops of water in a fountain slowly falling in the brimming bowl.'

'The air was very silent and you could hear the crickets bats but more slowly than before: pick, pock.'

'In the silence of the soft grey air he heard the cricket bats from here and from there: pock.'

'The fellows were practising long shies and bowling lobs and slow twisters. In the soft grey silence he could hear the bump of the balls: and from here and from there through the quiet air the sound of the cricket bats: pick, pack, pock, puck: like drops of water in a fountain falling softly in the brimming bowl.'

Shies were throws by fielders from the outfield. A lob was a style of underarm bowling, which died out after the First World War. 'Lobsters', like Digby Jephson, tried to hit the wicket by letting the ball drop from a great height, descending behind the batsman and hitting the stumps.
Cricket also passes through Leopold Bloom's mind in Ulysses, outside Trinity College:

'Heavenly weather really. If life was always like that. Cricket weather. Sit around under sunshades. Over after over. Out. They can’t play it here. Duck for six wickets. Still Captain Buller broke a window in the Kildare street club with a slog to square leg.'

A 'duck' is a batsman's dismissal for a score of zero. Square leg is a fielding position, on the left side of a right-handed batsman. A slog is a powerful shot in which the batsman hits the ball as high and far as possible, aiming to reach the boundary.  It's a risky shot to play, says wikipedia, because 'the ball is almost certainly going to be in the air for a long period of time and great technique and power is required from the batsman to actually clear the field.' 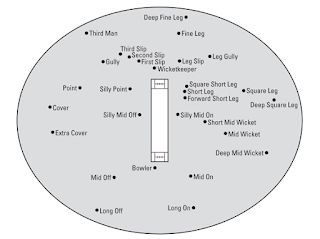 
Frank Budgen describes his first meeting with Joyce in his book, James Joyce and the Making of Ulysses. Joyce told Budgen that he warmed to him on their first meeting because, 'You looked like an English cricketer out of the W.G. Grace period. Yes, Arthur Shrewsbury. He was a great bat but an awkward looking tradesman at the wicket.'

Joyce's major treatments of cricket are in Finnegans Wake, which is packed with cricketing terms and the names of Golden Age cricketers. Joyce himself alerted us to look for cricket in the Wake:

'You are not Irish', he said, ' and the meaning of some passages will perhaps escape you. But you are Catholic, so you will recognize this or that allusion. You don't play cricket; this word may mean nothing to you. But you are a musician, so you will feel at ease in this passage. When my Irish friends come to visit me in Paris, it is not the philosophical subtleties of the book that amuse them, but my memories of O'Connell's top hat.'

Jacques Mercanton, 'The Hours of James Joyce' in Portraits of the Artist in Exile

Joyce's greatest delusion was that the more miscellaneous stuff he packed into his book, the more readers he would attract!

It was Ron Malings who first tracked down cricket references in a 1970 James Joyce Quarterly article, 'Cricketers at the Wake' which you can read on JSTOR.  Here's what he has to say about Thomas Lord, the father of cricket. 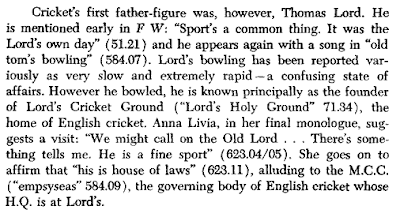 I like this, but it's typical of Malings, who believes that every time the word 'Lord' appears it must relate to cricket.

From Malings, I learned that the first Australian team to visit England was made up of Aborigines, who toured England in 1868. They'd learned to play the game in cattle stations in Western Victoria, where they were employed as stockmen. Malings set out to find all the members of the Aborigine side, shown in this photo 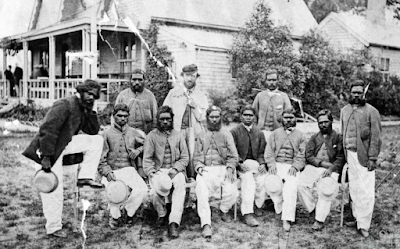 Malings looked for words similar to their names across FW, finding Jonny Mullagh, their star player in 'He had it from the Mullah' 193.18, James Cuzens, their most gifted batsman in 'courting cousins' 466.04, and King Cole, another player, in 'Old Finncoole' 569.23. But there are much more obvious reasons for these names e.g. Old King Cole mixed with Finn MacCool. I wish the Aborigine players were in the Wake, but none of them appear in the undisputed cluster of cricketers on pages 583–4, which I'll be looking at in a separate post.

Malings reminds me of Robert Boyle, who wrote a wonderful piece on angling in FW, and argued, 'The evidence that I have discovered is so overwhelming that the Wake must be considered as belonging in great part, albeit a bizarre part, to angling literature.'

Others have investigated Joyce and cricket. There's a 1975 book by Geoffrey Keane Whitelock, Cricket in the Writings of James Joyce, which I've never seen and which is currently unavailable. David Pierce has an excellent chapter on Joyce and cricket in his book, Light, Freedom and Song: A Cultural History of Modern Irish Writing.

Luckily, thanks to Raphael Slepon's wonderful Fweet, you can track down all the cricketing references yourself online. A search on 'cricket' brings 168 elucidations. 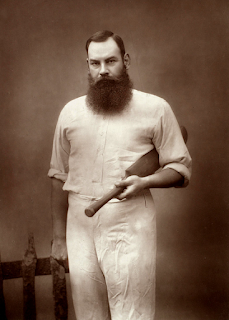 The player who appears most often in Finnegans Wake is W.G. Grace (1848-1915), the most famous Engish cricketer, who dominated the game during a long career. In the Wake, he is a version of HCE.

Grace was known, like Gladstone, as the 'Grand Old Man'.

'wot a lout about it if it was only a pippappoff pigeon shoot that gracesold getrunner, the man of centuries, was bowled out by judge, jury and umpire at batman’s biff like a witchbefooled legate. Dupe.'  336.36

Here the shooting of the Russian General/overthrow of HCE is reimagined as a cricket match, in which W.G.Grace - 'that gracesold getrunner' (old grace run getter) is bowled out by the three soldiers.

'man of centuries'. A century is 100 runs. Grace was the first player to score more than a 100 centuries in first class cricket. His final score, listed here, was 124.

'witchbefooled legate' – 'Leg Before Wicket'.
L.B.W. was a rule invented in 1744 to prevent a batsman using his pads to protect the wicket. If a ball, which would otherwise have hit the wicket, hits the batsman's pads he is found out by L.B.W., though there are several other factors an umpire has to consider, explained here by Stephen Fry.

Joyce gives us L.B.W.s elsewhere in the Wake:

Grace was notorious for being a 'shameless cheat' (Geoffrey Moorhouse in Wisden).  Once, when given out L.B.W., he said, 'They came to see me bat, not you umpire!'
'batman’s biff' – blindman's buff and the batsman biffing the ball.

Although he was a Gentleman (amateur) rather than a Player (professional), Grace made a fortune out of the game. Here's Geoffrey Moorhouse again:

'On Grace's first tour of Australia in 1873-74 (when he was a medical student simultaneously enjoying his honeymoon) he extracted a fee of £1,500 from the organisers, which would be well over £100,000 at present values. On his second tour in 1891-92, one-fifth of the entire cost of transporting 13 English cricketers across the world, supporting them in Australia and paying them for what they did there, went into Grace's pocket. He regularly collected testimonials - one, worth £1,458, was organised by MCC so that he might buy a medical practice - and overall probably took something like £1 million in today's currency out of the game.'

Grace came up during the early 'roundarm era', and continued to bowl in this archaic style even after overarm bowling was legalised in 1864.   Here he is showing his roundarm bowling technique in 1902, from the Guardian. 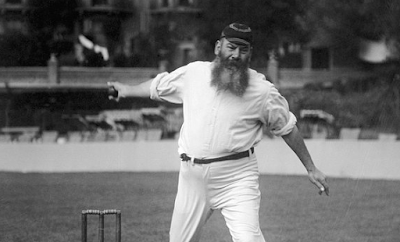 HCE describes himself in cricketing terms in 'Haveth Childers Everywhere', his long speech of self-justification:

'My game was a fair average since I perpetually kept my ouija ouija wicket up.' 532.17

In my next post I will be looking at the famous grotesque cricketing sex passage on pages 583–4, in which Grace, Trumper, Ranji and Spofforth all make an appearance. In a piece in the Guardian, Richard Tomlinson put this in his top ten cricketing scenes in literature, writing, 'Only Joyce could have constructed a filthy sex scene out of the names of first-class cricketers.'
Posted by Peter Chrisp at 11:28

Email ThisBlogThis!Share to TwitterShare to FacebookShare to Pinterest
Labels: A Portrait of the Artist as a Young Man, Clongowes, cricket, Ulysses, W.G.Grace