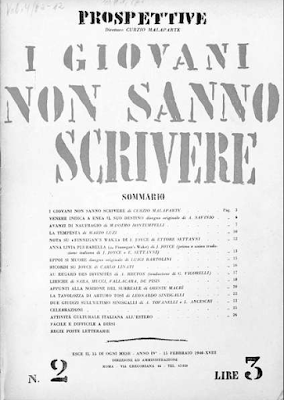 Edna O'Brien has a lovely piece in the Guardian about 'Anna Livia Plurabelle', which Faber is republishing this week in book form. Joyce was more proud of this chapter than any other part of Finnegans Wake. He made a recording of its final pages, published it in various forms four times, and oversaw its translation into French.

Joyce's last publication, in February 1940, was his own Italian translation of ALP – renamed 'Anna Livia Plurabella'.

Here's the front page of the literary magazine, 'Prospettive', which carried the piece. Joyce received it in March in St Gerand-le-Puy, the village he'd fled to from Paris as war engulfed France.

This was a dark time for Joyce, suffering from the ulcer that would kill him, anxious about his family troubles, and dismayed about critical indifference to Finnegans Wake. Yet he was cheered up by the arrival of 'Prospettive', writing a delighted letter to the journalist, Ettore Settanni:

'Your postcard as well as the February issue of 'Prospettive' came to me some days ago after having made a little Odyssey on their own account.
I have much pleasure in learning that my little ladykin*, the Dublin one, has completed her pilgrimage and has so tactfully made her modest curtsy before her August uncle Tiber. Did it amuse that very reverend greybeard at least to hear her unaccustomed silly and extravagant chatter?'

Joyce's delight in the translation is also recorded by Louis Gillet, who met him for the last time the following October. Yes, seven months after receiving the magazine, he was still talking about it! :

'He had discovered much to his surprise that his own prose, and even his verses, could be translated into Italian much better than into any other language....The last time I saw him at the Hotel du Commerce, in the village St Gerand-le-Puy, where he had run aground God knows by what mishaps, he was solely occupied by a new translation of the first pages of 'Anna Livia' just published in Rome or Milan, in a de luxe magazine of futuristic tendencies....The fact is that this version is an outstanding tour de force. If it is ever completed, I cannot too strongly advise the beginners to read Finnegans Wake in the Italian text.'

Joyce was helped in his translation by Nino Frank, the Italian born French film critic, best known for inventing the term 'Film Noir'.  Frank was a friend of Joyce's in Paris for 16 years. When he first got to know Joyce, Frank was struck by his coolness and reserve. The reason for this, he later discovered, was that they were talking in French.

'Not long afterward we fell into speaking Italian together. Nothing more was needed to bring me closer to Joyce and to discover that he was a totally different person from the one I had imagined....It may seem trivial that, to discover Joyce as he really was, in all of his simplicity and his vivaciousness, we needed only to change languages. Even after this discovery, I myself did not fully comprehend the importance in Joyce's life of his sojourn in Trieste, the attachment he felt for everything Italian.'

In 1938, Joyce asked Frank to help him with the Italian translation of 'Anna Livia', saying:

''We must begin work before it's too late. For the moment there is still one person in the world, myself, who can understand what I have written. I can't guarantee that in two or three years I will still be able to.'
Thus I was led to spend two afternoons a week for a good three months with Joyce. The fragment of Finnegans Wake that we did was the very one...which ten or so French writers, along with Joyce himself, had taken six months to make a French adaptation of several years before. Joyce and i were proud to have beaten the French team by an ample margin....Joyce – to whom the French language always remained somewhat foreign, although he knew it to perfection – felt the same delight in playing games in Italian as he did with English. Thus I can say without false modesty that Joyce is responsible for at least three-quarters of the Italian text; for the most part I served as guinea pig and fellow-worker.
A dozen lines an afternoon, such was our harvest. We worked in Joyce's room, a characterless place that I have no recollection of, usually with him stretched out on the divan in his dressing gown....I read and interpreted the text on my own, after which Joyce explained it to me word by word, revealing to me its various meanings, dragging me into the complex mythology of his Dublin. Then began the slow tennis of approximation; we tossed short phrases to each other like slow-motion balls through a rarefied atmosphere. In the end our procedure resembled incantation....

Two things struck me: first, that the rhythm, the harmony, the density and the consonance of his words were more important to them than their meaning, and that, for example, having written one thing, Joyce scarcely hesitated to put down something completely different in Italian, as long as the poetic or metrical result was equivalent. On the other hand, with each elucidation he furnished me, this is what I noticed: whatever the phrase or word, the key remained his birthplace, be it an occurrence of his Dublin life, a recollection, or a legend....
This attempt at an Italian translation must have been one of Joyce's last great pleasures, if I am to believe the little book Louis Gillet dedicated to his friend. According to that book Joyce claimed this version was the best introduction to the reading and understanding of the original. Actually, it is perhaps richer harmonically...than the French.  The Italian language is better suited than the others, even than English I sometimes think, to the at once colloquial and epic style that, along with a deliberate break from a certain Cartesianism, was sought by the writer....
I had the thing typed in well-spaced characters so Joyce could read it, and afterwards he never tired of exhibiting it everywhere.'


During his birthday party, on 2 February 1939, Joyce insisted that Nino Frank read everyone the translation:

'I believe that this entertainment was as painful for my listeners as for myself, since they scarcely understood Italian and I have neither expressive gestures nor a melodious voice. But Joyce applauded enthusiastically and would not stop until I began again da capo.'

Eric Rosenbloom has placed Joyce's three versions of Anna Livia side by side on his website, which you can read here. You can also read Frank's original typescript in the National Library of Ireland, which is online here.  I recommend reading the final magnificent lines out loud.

And then imagine Joyce wildly applauding. 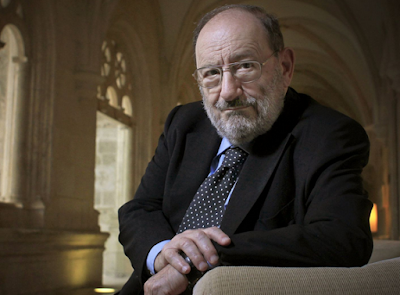 We’re lucky to have a comparison of the English, French and Italian versions by Umberto Eco, the great novelist, critic and translator. It's in his book, Experiences in Translation, which you can read online here.

It may be that the step is an excessive one, that the language cannot stand the experiment, but something has happened in the meantime. (With Italian) Joyce found himself having to render a language that lends itself to pun, to neologisms, and agglutination, as well as English does (which has the advantage of an abundance of monosyllabic terms) into a language like Italian, which resists the formation of agglutinative neologisms….

Let us take a look right away at an example in which Joyce, forced to translate a rhythm proper to English, reformulates a text to adapt it first to the French language and then to Italian:

Tell me all, tell me now. You’ll die when you hear. Well, you know,  when the old cheb went futt and did what you know. Yes, I know, go  on.

Here there are thirty monosyllabic words. The French version tries to reproduce the same monosyllabic structure, at least from an oral standpoint:

Twenty-five monosyllables. Not bad. The remainder consists of words made up of only two and, at most, three syllables. What happens with Italian, a language with few monosyllabic words, compared to English at any rate?

Sixteen monosyllables, but at least half of them are conjunctions, articles, and prepositions, ‘proclitic particles,’ which have no tonic accent, but are bound to the following word and, if anything, from the point of view of the auditory effect, lengthen it. All the other words are of two, three, or even four or five syllables. The rhythm of the passage is not monosyllabic at all. Where the English text arguably has a jazzy rhythm, the Italian has an operatic flavour. This was Joyce’s decision. If we take a look at other passages from his Italian version, we find some extremely long words like scassavillani, lucciolanterna and pappapanforte, freddolesimpellettate, inapprodabile, and vezzeggiativini — long even for the Italian lexicon, and, in fact, Joyce invented them.

Of course, Finnegans Wake also uses some very long compound words, but the play is usually on the fusion of two short words. Since Italian does not lend itself to this solution, Joyce opted for the opposite choice: he sought a polysyllabic rhythm. In order to obtain this result, he was seldom bothered if the Italian text said different things from the English text.’

A striking feature of the Italian version, noted by Eco, is the absence of all those river names:

‘No longer playing with the idea of rivers...he was playing with Italian instead. He had spent almost ten years looking for 800 rivers, and he discarded nearly nine-tenths of them to be able to say chiacchiericcianti, baleneone, quinciequindi, frusciacque.’

(The Italian Joyce) is certainly not an example of ‘faithful’ translation. Yet many have written that, to understand Finnegans Wake, it would be a good idea to start with his Italian translation of it. Perhaps, or rather certainly because, on seeing the text wholly rethought in another language, one can understand its deep mechanisms, over and beyond the insistence on this or that play of quotations.'

Here's another comparison of the English and Italian:

‘Tell us in franca langua. And call a spate a spate. Did they never sharee you ebro at skol, you antiabecedarian? It’s just the same as if I was to go par examplum now in conservancy’s cause out of telekinesis and proxenete you. For coxyt sake and is that what she is?’

Eco provides a detailed interpretation of ‘Ostrigotta, ora capesco’ –  a Joycean invention rather than a translation:

‘We have an exclamation of disappointment and amazement, ostregheta (literally little oyster, but also a euphemism for the blasphemous oath in the dialect of the Veneto ‘ostia!’ literally ‘by the host!’), a suggestion of incomprehensible languages, ostrogoto (Ostrogothic: a sylloge of the whole of Finnegans Wake), and Gott (God). Blasphemy pronounced before an incomprehensible tongue. And so it would seem right to end with non capisco (I do not understand). But ostrigotta also suggests I got it, and as Itjoyce writes ora capesco, which is a blend of capisco (I understand) and esco (I get out), Joyce gets out from under the problem, or the meandertale.
The truth is that Joyce did not care a whit for any of our translation problems. What he wanted to do was invent an expression like ‘Ostrigotta, ora capesco.’'