Snow Falling at the Gresham Hotel


In January 2016, Lisa and I had tickets to see Aidan Gillen performing 'The Dead' at the Smock Alley Theatre in Dublin. This was the perfect time and place to see greatest story in world literature. The theatre is a short distance downriver from 'the dark, gaunt house on Usher's Island' where the story takes place; the performance was also at the same time of year – Epiphany week – as the Misses Morkan's annual dance; and Gillen's been one of our favourite actors for more than twenty years, ever since we saw him play Skinny in Jez Butterworth's Mojo at the Royal Court.

I booked a room in the only possible place to stay – the Gresham Hotel, where the story ends with Gabriel and Gretta Conroy, and the snow falling outside the window.

'A few light taps upon the pane made him turn to the window. It had begun to snow again. He watched sleepily the flakes, silver and dark, falling obliquely against the lamplight....'


Clearly, we needed to end the day watching snow falling outside the window, but the forecast was for rain. The obvious solution was to bring our own snow with us. So I bought some 'magic snow' from my local garden centre. 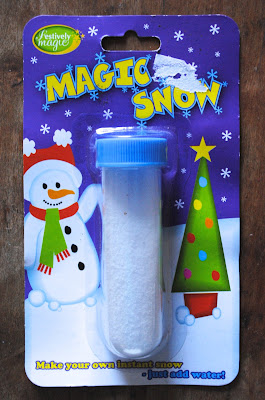 I think this is what folklorists call 'pseudo-ostention' - acting out a myth in real life. There's a lot of this around Joyce. It's hard to explain just how much pleasure Joyce lovers get from re-enacting his fictions in Dublin. 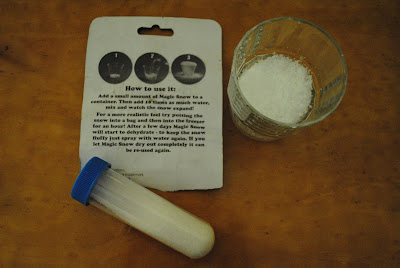 We arrived at the Gresham on Friday afternoon.

'...as they stood at the hotel door, he felt that they had escaped from their lives and duties, escaped from home and friends and run away together with wild and radiant hearts to a new adventure' 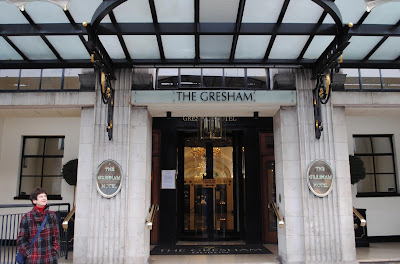 But we could see that it was very different from the hotel in the story. We learned that the original Gresham burned down in 1922 during the Battle of Dublin.


The hotel had been a victim of the same kind of vandalism now threatening Joyce's House of the Dead!

The Gresham was rebuilt in 1927, and this what the foyer looks like today. 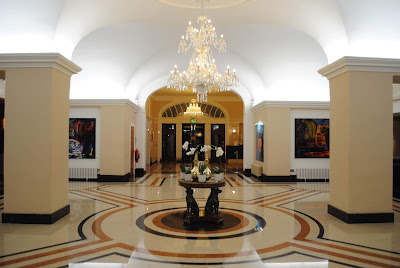 'The porter led them along a corridor and opened a door...' 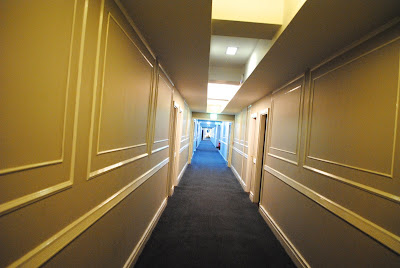 But we had a room at the back, overlooking the rooftops of Dublin, and luckily there was a window we could open.

After unpacking we walked down to Usher's Island, to visit the House of the Dead, which was sadly closed.

In the evening, we went to Lanigan's Pub, a regular for stage folk from the Abbey Theatre nearby. At the bar, we found Karl Shiels, another great Irish actor, and artistic director of the pub's Theatre Upstairs. When we told him we were going to see 'The Dead', he said he'd read from it the previous year at the memorial for Barney McKenna of the Dubliners. Karl said he'd had to cut the text, which got him into trouble with 'the head of the James Joyce society.'

We first met Karl here in 2013, when we were in Dublin with our Brighton friend, Tim Crouch, who had a show on at the Abbey.  Karl, standing outside the pub with a friend smoking, wore a t-shirt with a picture of a republican blanket protester and the words of Francie Brollie's H-Block song. He said he hoped we didn't mind his anti-British shirt.

Karl and his friend cracked up.

Writing this today, I was shocked and saddened to learn that Karl died earlier this year.

'One by one, they were all becoming shades. Better pass boldly into that other world, in the full glory of some passion, than fade and wither dismally with age.'

Karl burned brightly. His Irish Times obituary described him as 'a streak of lightning through the world of Irish drama.'

On Saturday morning, we visited Books Upstairs on D'Olier Street. I asked the bookseller if he knew anything about a new statue of Joyce standing on a sundial. He'd never heard of it, but looked it up online and found it was at the Merrion Hotel. We told him our reasons for being in Dublin, which led to the following conversation.

Me: We're staying at the Gresham, where Gretta and Gabriel stay.
Bookseller (to Lisa): I hope you won't have any revelations for him later!
Me: I've got some fake snow to throw out of the window of the hotel. Except I've learned it's not the original hotel.
Bookseller: We got rid of that one in 1922.
Me: So I'm throwing fake snow out of a fake hotel in honour of two imaginary people!
Bookseller: Sounds pretty authentic to me!

After visiting the new statue, which I've posted about before, we went to the Library Bar to meet our Dublin friends, Olga, Kevin, Alfreda and Ciaran, who were coming to the matinee of the play with us. Everyone was excited at the prospect of seeing Aiden Gillen.

Then we were off to the Smock Alley to see the play. I loved this programme note from the company.

'Although many of the stories in Dubliners are about the relationship between the living and the deceased...none perhaps achieve quite the same sense of universal connection as 'The Dead'. The story seems to reveal more of itself each time one reads it, growing older with you, speaking with renewed relevance at every age. For most writers such a story would be the crowning glory of their whole career. Yet when one considers how young Joyce was, merely warming up for his subsequent achievements we can only stand dumbfounded before his sheer talent....
So it's our privilege to welcome you to join us tonight as once again we visit the Morkans' Christmas party. And travel with Gabriel and Gretta Conroy down the Quays to the Gresham Hotel, and off across Ireland in a snowstorm like no other, and out into the universe, and into eternity.'

Here's Lisa's description of the opening, from our diary.

Gillen performed the 16,000 word story at a brisk pace.  I loved the way he handled the comic episodes with Browne, the conflict with Miss Ivors, and Gabriel's 'fever of rage and desire' after the party finishes. 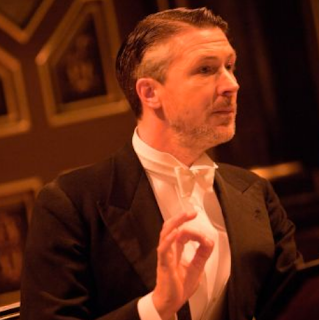 But I missed Gabriel's compassion ('Generous tears filled Gabriel's eyes') and the breakdown of his egotism at the very end. Here's Peter Crawley's review in the Irish Times:

'The epiphany of Joyce’s story, a realisation that Gabriel hardly knows his wife, himself, or the feeling of overwhelming love, may be one of the most remarkable expressions in literature, a discovery that is dumbfounding but not bitter. Here, Gillen actually seethes through the whole exchange, as though it were nothing but female taunts ('I think he died for me') against a lusty, bruised male ego. It becomes an excessively poisonous interpretation, venomous to those last transfixing words.'

Feargal Murray's music was beautiful, though I was disappointed he didn't play any of the melodies in the story.  He probably thought it too obvious to give us 'The Lass of Aughrim'. 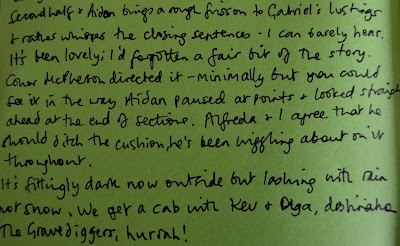 Like Gretta and Gabriel, we got a cab which took us along the Quays and then across the Liffey on the O'Connell Bridge. But instead of stopping at the Gresham, we carried on north to Glasnevin cemetery, where dwell the vast hosts of the Dublin dead.

'My father and mother had many friends in Bray and in town, and at about Christmas time and the New Year they often went up to dances in Dublin and stayed overnight at a hotel, as the Conroys do in 'The Dead'.' Stanislaus Joyce, My Brother's Keeper
Right by Glasnevin is John Kavanagh's, the Gravediggers, Ciaran's family pub. It's our favourite pub in Dublin and it was the obvious place to go after seeing 'The Dead'.

Someone commented that this picture looks like an Aer Lingus ad. If only we could live in one...

At one point we were joined by a couple of the Undead - the pub is on various horror tours. 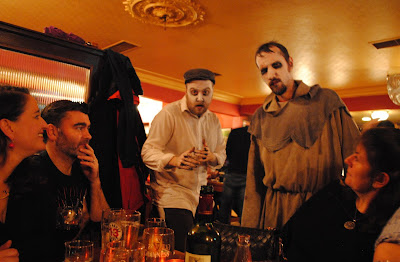 The lovely Guinness flowed and by the end of the evening, we were as screwed as Freddy Malins in Joyce's story. We poured ourselves into a taxi and headed back to the Gresham. 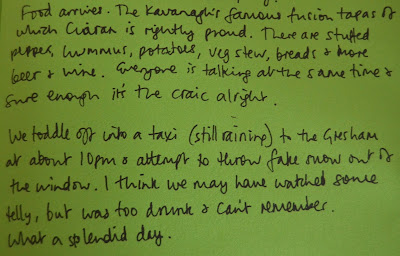 I have two blurred pictures of a hand throwing the fake snow out of the window into the Dublin night. 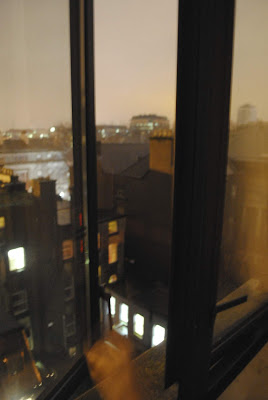 But is it Lisa's hand or mine? Probably Lisa's, but neither of us can remember. 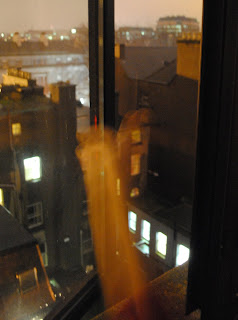 A last diary entry from Lisa...

The snow still lay on the windowsill, proof that our mission had been accomplished. 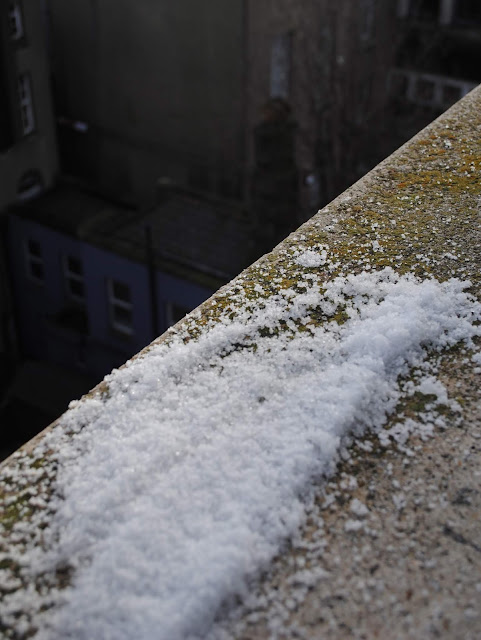 Email ThisBlogThis!Share to TwitterShare to FacebookShare to Pinterest
Labels: Gresham Hotel, Karl Shiels, The Dead, The House of the Dead